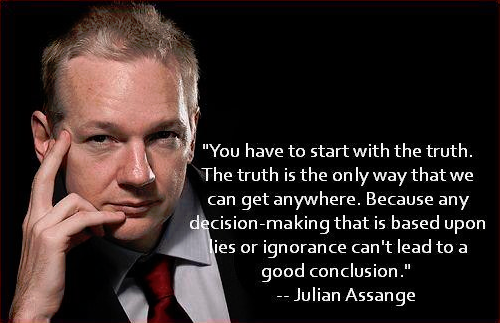 The founder of Wikileaks, Julian Assange, famously once said …

“You have to start with the truth. The truth is the only way that we can get anywhere. Because any decision-making that is based upon lies or ignorance, can’t lead to a good conclusion.”

Of course in many ways, Assange was “stating the bleeding obvious” as they say.

But the underlying ”truth” is, that many people never even get to the “start with the truth” point.

Simply because they are just not prepared to ask the tough, honest, self-examining questions that need to be asked, in order to “uncover” the truth. If someone could come up with a painless, socially acceptable way of discovering the truth, then they’d be all in!

Now that word “uncover” is critical to the process of discovering truth. People similarly talk of “leaving no stone unturned”, in the quest for truth, which also hints at the effort and persistence needed in order to reveal any truth.

That aspect, is the courage to begin … “dismantling falsehoods”.

Now we all instinctively know, that such dismantling is a prerequisite to the discovery of truth.

Ah, “but therein lies the rub”.

Because we all also know, that the process of uncovering the truth must be preceded by the tedious, often personally painful removal of the “layers of falsehood” that obscure it.

But, just like sanding a painted surface, in order to reveal its true nature below, so too the “sanding away of falsehoods” can often be a process that is not only painful and slow, but one that we are hugely reluctant to engage in. But it is one that must be “endured”, first, before the beauty of any truth below can be revealed.

The scraping away then, of the obscuring layers of “paint”, used to mask any truth, is the crucial activity which must be engaged in, first, before ever being able to communicate any “truth”.

Any spray painter will tell you though, that the success of painting any classic car, is … “99% preparation, and 1% application”.

Any flaw in the metal surface of the car, will still be there, if the cleaning and preparation of that surface is inadequately or lazily done.

Often though, the veneer of paint on the outside, hides nothing more than rusted away metal underneath; fit only for scrapping.

So too, many issues we face in life, appear as a mere “veneer of truth”, but are in reality, fit only to be scrapped too.

But man, is the prospect of facing up to that reality about us painful.

Often then, only our lack of willingness to actually know the truth, prevents us from doing the work necessary in order to reveal it.

So when Julian Assange says that you have to “start with the truth”, of course he’s right, but that’s really like expecting to discover only clean bare metal, on every junker car that we come across. It’s just not going to happen in the real world, and there is a world of pain to go through before we get to enjoy “the good bit”, truth.

The trouble that Assange is faced with (however well intentioned as he may or may not be, and that’s a wholly different subject) is the same as is faced by any purported “revealer of truth”. Quite simply, most people are deeply and psychologically unwilling to risk going through the painful “truth discovery process”.

Quite simply, their egos get in the way. A renegade ego demands “stroking”, not poking.

They and their egos are simply not prepared to expose themselves to the withering glare of “self analysis”.

They fear that if they find that their deepest, darkest suspicions are confirmed, and that the “veneer of truth” that they’ve always believed in, turns out to be nothing more than crumbling rust, they will be unable to cope with that new reality.

It’s psychologically tough to admit that we have been wrong. Some never admit to it. But some have learned to relish it, knowing as they do, that only “challenges” in life, not its “comforts”, allow us to grow.

In reality, “the truth” is often very easy to discover, and no one consciously admits to believing or living a lie, but by the same token, they often don’t want to know either, and that’s where the trouble lies.

The big issue then, is our own reluctance to ask the difficult and uncomfortable questions that psychologically prevents us from “cleaning the surface”, and hence revealing the beauty of the “unvarnished truth”.

To many people though, such self analysis is simply too high a price to pay.

But the result of failure, (or worse, refusal) to take issues that we believe in, “back to the metal”, is always the emergence of “delusion”; delusions that are merely fallacies, painted to look like truths.

When it comes to the world of politics, government, journalism, banking and finance of course, then we are really “up against it”, because there are an enormous number of “vested” and “special” interest groups, that have much to lose from the revelation of truth.

Hence, those who seek to be the “sandpaper” that attempts to remove the layers of deception that currently mask the the truths that “they” seek to hide, must in their world view, be vilified, demonised and punished.

The very survival of their abusive institutions of power is at stake. So much so, that the “prevention of the revelation of truth” has become their absolute prime imperative, if they are to ensure the survival of their existing power structures.

In the current, dominant, globalisation system that these entities have created for us to live under, we have neither a truly Communist, nor a truly free market Capitalist system. What has been created instead, is a system that has morphed into possibly “the worst of all worlds”.

Billions of people subsist on the edge of poverty and starvation, while, not a 1%, but a 0.001% have concentrated control, power, and wealth “beyond the dreams of avarice”.

A “total control”, debt-based Central Banking System then, has metastasised into a parasitic, “black hole” mechanism, that even Nation State governments seem unable to break free from.

Now I realise, that it can be very successfully argued that the “governments” are not even trying to break free from the clutches of the Central Banking System, and few who have delved into the subject dispute that claim.

It is in effect, a “welfare system” that feeds both ends of the spectrum of wealth.

At one end, we have “Corporate Welfare” for mega corporations, who thrive on government-supplied contracts, who are “subsidised” in good times, and “bailed out” in bad, alongside a deliberately-sustained “under class” of vote suppliers, who have been “weaned onto welfare”, habituating them into a mental state of “symbiotic dependency”, addicted to a system that they have no control over.

Squeezed in the middle, is the entrepreneurial “productive class”, the rapidly shrinking “middle class”, pressured almost to breaking point, as they labour to provide for both extremes.

This parasitic system then, bleeds the maximum amount of “sweat equity” out of the the “blood, sweat and tears” effort and innovation of the people. The irony is, that between the industrious “productive class”, and the deliberately addicted “dependent class”, they massively outnumber the “corporate welfare” class.

And what is it, that prevents the awakening of these two groups, to the takeover of their lives by the Corporate Welfare gang?

Quite simply the near “collective” unwillingness to peel away the layers of obfuscation, and begin “dismantling the falsehoods” that mask that “ugly” (actually beautiful) truth.

… instead, “You Have To Start With The Courage To … “dismantle falsehoods”; essentially to uncover corruption.

That is the true “battle for hearts and minds” that must be won.

As the German Philosopher, Arthur Schopenhauer, once famously said … “All truth passes through three stages. First, it is ridiculed. Second, it is violently opposed. Third, it is accepted as being self-evident.”

It remains to be seen then, how long it will be before enough of humanity wakes up and accepts as “self evident”, the truth about the corruption and futility of the system we are currently forced live under.