It has been nearly three years since we published our first Outlook Report in December 2012. Since the beginning of our publication, we have focused on different aspects of the gold market and have analyzed what moves the gold market. In this article, we would like to re-examine some of the topics that we had previously discussed and analyze whether any of our assumptions have changed.

Financial repression has been a frequently discussed topic since our first publication. During that period, many of the measures we had warned about are now in place or events have already taken place. A good example is capital controls. In 2012, a discussion about the possibility of capital controls in a Western country seemed like a conspiracy theory. In the meantime, they became a reality in both Cyprus and Greece. Could a major Western country be next?

We also warned about negative interest rates. At that time, they were observable in some short dated government bonds. The ECB and Swiss National Bank have both now lowered deposit rates into negative territory. The results: Swiss government yields are negative for terms up to 10 years. Imagine! As an investor you have to actually pay the Swiss government so that you can lend them money for 10 years. It is absurd, if you think about it. The same is true for several other European government bonds.

One thing that we had predicted didn’t become reality yet: Consumer Price Inflation. Although asset price inflation is very prevalent and real estate and equity prices have increased rapidly, we did expect consumer prices to pick up more quickly. However, this can always change … very quickly.

Another topic that we have been discussing for years is the debt level. Debt and interest are not bad by themselves. The principal problem is when we have a currency system that is based on debt. Why? Since debt has to be repaid with interest, if the money supply does not constantly increase debtors will default. It is inherent to the system that the money supply has to constantly increase to avoid a collapse, and this in turn reduces the purchasing power of money.

So, do we still have a debt problem? Yes, we still have a debt problem, but it has gotten worse. My good friend Ronald Stöferle, the author of the publication “In Gold we Trust”, developed the chart below. The result is striking! Between 2007 and 2014, the total global debt increased by over 40%. Governments, financials, corporations and households have all increased their absolute debt levels in the last few years. The chart shows that total global debt has reached 200 trillion USD. World global output measured by the gross world product was around 76 trillion USD in 2013. This means that on a global scale we have a debt ratio of approximately 270% of the total yearly world output. 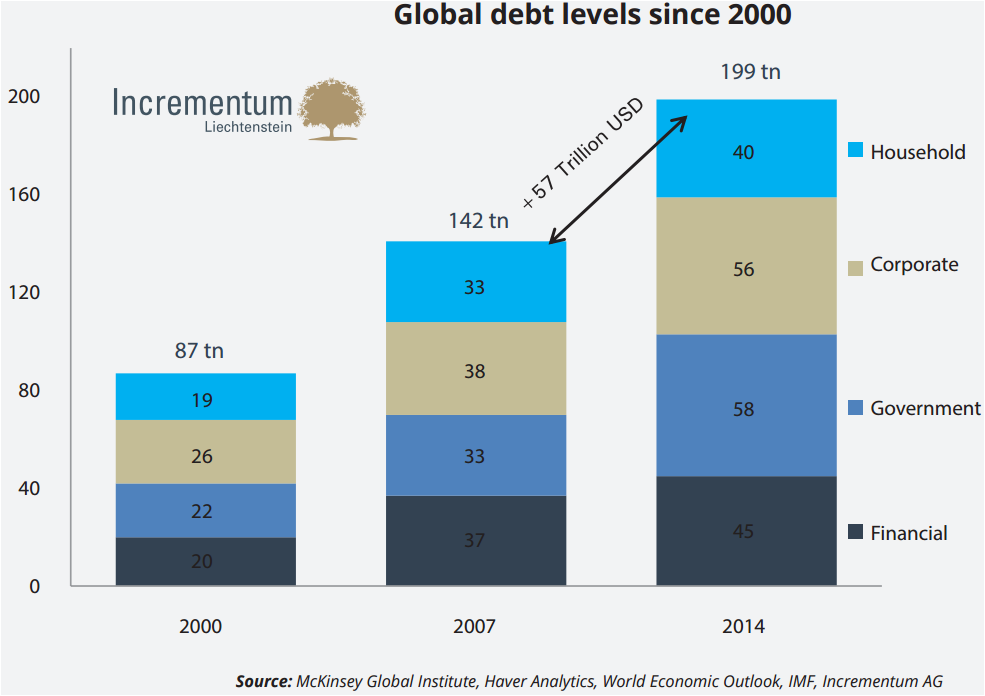 In summary: The debt situation has become worse in the past few years. It has reached an unsustainable level. However, unsustainable situations can continue to persist for some time. The question is not if, but rather when this debt bubble will pop.

Where is the gold price heading?

When clients ask me where the gold price is heading, some of them are surprised to hear that I don’t actually have a target price for gold. The reason why I personally hold gold is because I see it as an insurance against our current monetary system. It is one of the only assets I know that has no sort of counterparty risk and has been considered to be of value for thousands of years. Do I follow the gold price constantly? No! Do I regret owning precious metals when the price stays stable or declines in USD? No, not really, the same way that I don’t regret owning health insurance, when I stay healthy.

I would like, however, to make one observation in regard to the gold price. It becomes clear when we look at the chart below. Since the 2008 financial crisis, central banks worldwide have pumped a massive amount of liquidity into the markets. Much of this liquidity has ended up in “bankable assets” i.e. equities and bonds. Since their lows in March 2009, both the S&P 500 and the German DAX have had triple digit gains of almost +170%. At the same time, the real economies have more or less stagnated. In the meantime, the price of gold has increased by 21% during the same period. Which asset do you think is more at risk of being in bubble territory? Which one do you think has a bigger upside? I leave you to draw your own conclusions.

Claudio Grass is the Managing Director of Global Gold, a company Q Wealth has known and been associated with for many years.

To read more about holding physical gold outside the banking system and the available solutions offered by Global Gold, please visit GlobalGold.ch/physicalgold and request an investor kit for free.