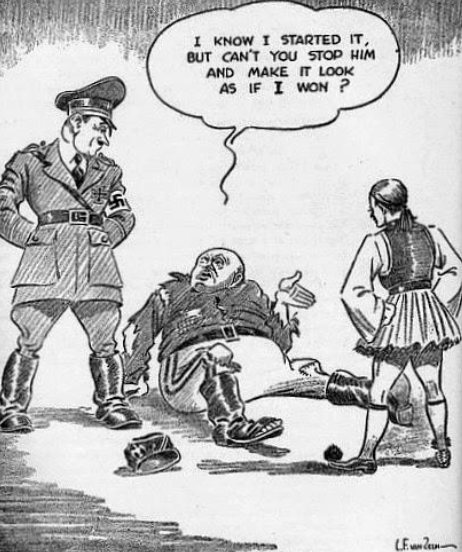 On April 6th, 1941, the German Army invaded Greece across the Yugoslavian and Macedonian borders. It was done in a rear guard attempt to salvage Mussolini‟s bungled and hedonistic attempts to invade the country.

With typical ruthless efficiency, by 21st April, German troops had raced down through Greece, and their tanks rolled into Athens and the capital fell.

For those who have been following the Greek Tragedy of Debt story, that “Canary Down The Coal Mine” saga that exposes the current Debt War that is raging across the world, then the latest developments that we will be discussing here from Greece, will probably not come as much of a surprise.

But in this 21st century “invasion” of Greece isn‟t using anything as vulgar as tanks. That old fashioned kind of warfare, the bullets & bombs kind, is always such a nasty business … so terribly inefficient when all you want is to steal the profits from the efforts of the people.

No, the most efficient way to take over a country, is to deploy “remote controlled”  Debt Bombs.

First, simply ensure that laws are passed within the target country, that prevent the nation state from creating and administering their own debt monies, internally via their Treasury (as the British did just prior to World War One).

Secondly … ensure that you send your Banking advisers to the the target country, and insist that the only way for them to meet their needs, is to take on external loans. This is critical, as you will see.

Thirdly, make sure that those loans come with “bear trap” caveats, which will eventually and inevitably, put the country into a submission strangle hold, totally beholden to the whims of the creditors.

Once all that groundwork has been put in place, then the new cuckoo-in-the-nest, those so-called foreign creditors, can simply call in their loans, much as the Bankers did to investors in New York in 1929.

When the country can no longer keep up with their loan repayments, the faux creditors who set up the fraudulent debt initially, can then simply „cherry pick‟ the most lucrative money generators from within the country, and insist that they must be sold off (privatized), as part of a bogus “package of reforms”, purportedly “necessary” before further bogus loans can be handed out, in orderto pay existing debt repayments!

Now does all of that sound fanciful?

Surely Greece‟s European Central Banking creditors have only been generously trying to keep the country afloat, and have been trying to boost their GDP, no? Well, that certainly is the cover story, for sure.

But the facts on the ground are (as is always the case when we are dealing with fraud) are beginning to tell the real story, about the real agenda that is being rolled out.

Probably Greece‟s best most lucrative remaining asset, is her tourism.

A sunny climate, hundreds of pristine islands, studded with thousands of sandy beaches, all set in a seemingly endless azure sea. It is a heady, seductive combination that has been drawing millions of tourists to Greece for many decades now.

Now the attraction of enjoying such beauty is never going to diminish, and that is critical, but one question.

Exactly how do most of those tourists get there?

Well by aeroplane mostly you say, and you‟d be right.

And so wouldn‟t it seems completely incongruous to hear then, that of all governments who could possibly have done it, that it has been the current Left

Wing Syriza government, who are to “privatize” 14 Greek airports!

Yes, you read that correctly!

Now it could be argued of course, that that is exactly what is needed in Greece.

But really, it‟s not the purpose of this article to argue that political point, either way.
The relevant point to this particular Special Report, is in the detail of just what is happening with this particular proposed “privatization”.

The point in question, is this.

Why is it, that these airports are not being privatised WITHIN Greece, nor are they being sold to Greek companies or entrepreneurs?

This is just a brief taster of the latest “Special Report” from our Banking Expert… He tells us Whats Really Going On… The stuff we need to know, rather then what they want us to know!

For members you can head over to the members area and read the full report along with numerous other “Special Reports” from Kris and our team of experts.

If you are not a full paid members yet, i would recommend you check out our Membership Packages and get signed up asap…. The prices are going up soon!!