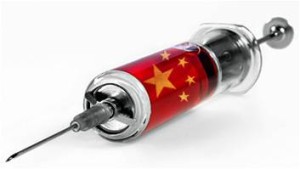 Ever since China’s stock markets took their recent tumble, from their mid-June peak, the Chinese Central Bank (the PBOC) has rolled out, what by any standards has been, a massive stimulus package.

Well they have been “mixed” to say the least.

This is is no small matter. The Chinese quite rightly feel, that their country’s entire financial system is at stake.

But the sheer scale of China’s stimulus package has raised concerns with many analysts, that they are having to go “too far” in propping up their markets.

However, as we have commented here lately, of all of the countries in the world, probably China is as well equipped as any, to weather the kind of storm that they are going through right now.

But one phenomenon that has emerged, is that many pessimistic, fearful and spooked small investors, are essentially trying to “front run” the Central Bank and the Government, by selling their shares … while they believe they still have money left.

Essentially what they are saying, is that they want to sell before government support dries up.

The result has been plain for all to see; the Shanghai Composite Index has been incredibly volatile in recent weeks.

But, just what is the scale of the stimulus package that Beijing has been swinging into operation, and exactly how much have they actually spent trying to support their markets?

Q Wealth Report went looking for what the mainstream media loves to call a “well placed source” … and while we didn’t quite come up with a private audience with Zhou Xiaochuan (the longest serving Governor of the PBOC, having been at the helm since 2002) we did come up with … Christopher Balding!

A respected economist, and a professor at “Peking University”, Christopher Balding took it upon himself to compile a list of the frenzied activity that the PBOC has been taking part in during the tumultuous three weeks or so, from late June 2015, through to 17th July 2015.

When he had tallied all of the funding “injections” up, he arrived at an astounding figure of ….

The following bar chart then, showing China’s cumulative spending, is well worth a moment or two’s perusal. 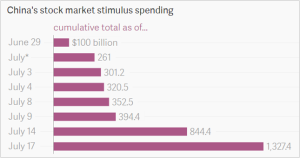 Now just to put that enormous $1.3 TRILLION DOLLAR figure into some kind of perspective, it is more than FIVE TIMES the $247 BILLION DOLLARS that the United States Government initially put into their own “Troubled Asset Relief Program” (TARP), in the wake of the 2008 Crisis.

For something of a breakdown of that spending, here’s how Balding arrived at his astronomical sum :

On June 29 : Chinese Pension Funds were, for the first time, allowed to invest in stocks … Injection:   $100 Billion

On July 4: China’s major Securities Brokerage Houses announce that they are to invest billions in order to “stabilize the markets”. Let’s just say that that money didn’t come from the Brokerage Houses profits! Injection: $19.3 Billion

On July 8: The China Securities Finance Corp. (CSF) is set up with direct Central Bank funding. It is tasked with making “margin loans” for the purpose of “stock-buying”.   Injection : $32.0 Billion

On July 14: Beijing introduces what many observers see as a dangerous program, that converts “Local Government” debt, into Bonds. Injection :  $450 Billion

July 17: The CSF is called on again, and is given further billions in additional funds to intervene in the markets.   Injection:  $483 Billion

It has to be remembered too, that the above figures do NOT include stimulus measures that were rolled out before the June Crash, measures and “billions” that are surely still injecting liquidity up to the present.

Those previous moves include a series of “reserve ratio” cuts, that were implemented from December 2014 onwards, to the tune of $282 Billion Dollars in liquidity … as well as the People’s Bank of China’s own direct capital injection of $62 Billion Dollars, that they felt compelled to throw at two failing State Banks in April, in order to “bail them out”.

If those additional “billions” had been included in Balding’s figures, then the total figure for “market support”, would have come to a staggering ….

Towards the end of his report, Balding is quoted as saying ….

“That is far and away the largest economic support package in history!”

One of Balding’s final comments, is that the Chinese Central Bank and Government ….

“ … is dealing with much more profound problems than we realized”

While he has stuck rigidly to what he knows he can verify, and what he himself has been told privately and directly by impeccable and reliable sources, Balding’s strong suspicion too, is that it is in the arena of “Corporate debt” (that lies outside “the markets”, and hence outside the same kind of “State intervention”) that a major hidden problem lurks. His concern is that such private corporate debt is much higher than is being publicly acknowledged.

But even putting aside such speculation about the debt mountain issues in the Chinese “private” sector, the sheer cost of the current and ongoing “stimulus package” is putting an enormous strain on economic growth on China going forward.