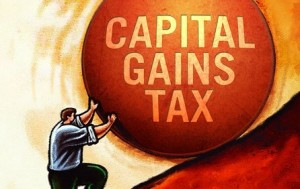 The car company, we’ll call Tesla, has done extremely well and surprised its many critics.  Roy originally purchased twenty five hundred shares at $20.00 each in July of 2010.  It now trades for about $140 a share.  Roy would love to cash out the entire lot and just roll around on the pile of cash but he knows that selling the stock will trigger a huge tax liability on $300,000.00 of capital gains.

The thought haunts him

Roy also runs a small farm and sells freeze dried foods online.  He wants to sell the business and retire to a house in the mountains.  He is divorced and has no children but he is dating his long term survivalist lawyer girlfriend, Wendy, who knows a little something about asset protection.

He turns to Wendy for advice and, as they discuss his financial goals, she learns that he donates quite a bit of money to help reinstate U.S. civil liberties.   He says he intends to leave everything to the ACLU.

After a proper woodshedding, it turns out that what he really wants to do is marry Wendy and donate his money to the Electronic Freedom Foundation (EFF) a 501 (c) (3) nonprofit organization.  They will retire to the islands where she will help him manage his assets.   She helps him understand that his philanthropic aspirations are at odds with the urgent need he feels to accumulate wealth and prepare for the coming economic collapse.

That thought also haunts  him.

SOLUTION: Wendy suggests that Roy should set up and contribute his stock to a Charitable Remainder Trust (CRT).

Doing so, she explains, will allow Roy to donate the stock to charity now, thereby converting the highly appreciated asset, his Tesla shares, into a tax-free, tax-deductible, charitable gift.

Roy is not at first keen to give so much to charity; that seems hasty.

He is having trouble believing that by donating the stock to EFF now, instead of bequeathing it in his will, he can avoid the huge capital gains hit and take a tax deduction—subject to annual limits—for the $350,000 donated to charity.  What’s more, Roy can be named as donor, trustee and income beneficiary.

Wait, is that right?

The CRT can have tax-free gains and pay Roy a percentage of the income it accrues for either 20 years or for life.  To Roy, this sounds like sexy pillow talk from the law girl of his dreams.

No, she assures him; she has set up many CRTs for high wealth individuals as part of her asset protection law practice.  To Roy, Wendy is becoming more beautiful by the minute.

HOW IT WORKS: This part she does not try to explain in great detail but Wendy understands the complexities of the CRT as only she and the IRS can.

Once properly formed and funded, the CRT is an irrevocable, split-interest, tax-exempt entity, that can secure a future income stream for Roy’s life or for a term of up to 20 years.

Roy can be named as donor, trustee and income beneficiary.  After formation, Roy will donate the stock so no capital gains accrue to him.  Instead he will take a charitable gift tax deduction—subject to limits—for donating $350,000 to charity.

The CRT will sell the stock and not be subject to the capital gains tax because the CRT is a tax-exempt charitable entity under IRC § 664(c).  It, with Roy as manager, will re-invest the proceeds in a more diversified portfolio for the dual benefit of Roy (as income beneficiary) and EFF (as future beneficiary).

He will hire financial experts to help him manage and grow the wealth inside the CRT.

Based on actuarial data and IRS charts, Wendy thinks it best that Roy receive income for a term of twenty years with a payout percentage of 16% of the annual valuation of the held assets.  For tax purposes, income will be treated according to its source: 1. ordinary income, 2. capital gains, 3. tax-exempt income, or 4. return of principal.   Once the 20 years term concludes, the remainder will go to charity; hence the name “charitable remainder trust.”  Wendy makes sure Roy knows the remainder must be at least 10% of the fair market value of the assets contributed to the CRT.

DONOR: The donor can be Roy or any individual, but it could also be a corporation, partnership, Limited Liability Company (LLC) or trust.  At least one donor must not be a charitable organization.  The Donor is allowed to donate any easily valued item such as cash or publicly traded stock.  But also art, cars, airplanes, or anything of value may be donated with the understanding that the dollar amount will have to be ascertained, appraised and substantiated.

TRUSTEE: As Trustee Roy must manage and maintain the CRT and will have statutory duties as Trustee.  He must not self-deal, harm or waste the assets inside the CRT.  He can sell appreciated assets and invest the proceeds as he sees fit.  In this case, Roy is going to hire professional financial advisors to assist him.  He will agree to pay income to the income beneficiary (Himself) for a term 20 years, in this case.  Once the term ends, the Trustee must ensure the remaining trust assets are delivered to the charitable remainder beneficiary, EFF.   As Trustee he will have to manage the assets so that at least or $35,000 or 10% of the fair market value of the assets contributed, remain in the CRT.

INCOME BENEFICIARY: Roy will be named as income beneficiary and receive an annual payout for a term of 20 years, but he could have opted for life.  If he had children or grandchildren they could be named.  Alternately Roy could name both he and Wendy to ensure income for both their lives.   Since she is the drafting attorney, she convinces Roy to provide for only himself.  Depending on the CRT, the income beneficiary must take an annual payout somewhere between 5 to 50% of the assets in trust.  Roy will receive 16% of the value of the assets held in trust, to be re-valued annually.

TAX TREATMENT: The tax characterization of the income received by the trust is passed through to Roy as income beneficiary.   For tax purposes, his distributions are treated like their source: 1. ordinary income, 2. capital gains, 3. tax-exempt income, and 4. return of principal.  Gains are taxed to the income beneficiary only when income is distributed to him.

WENDY RECALLS ONE CAVEAT: Make sure the stock is not S-corp stock because CRTs are not eligible shareholders for S-corps and such a donation would immediately terminate the S-Corp status.  And IRS Publication 561, especially pages 5-6, explains that the taxpayer, in unusual cases, may be required to establish fair market value (FMV) for hard to value assets using reasonable means.

OTHER TYPES OF CRTs

If the income amount is based on the value of the assets at the time the trust is created, the trust is considered by the IRS to be an annuity trust, or CRAT, as regulated under Treas. Reg. § 1.664-2(a)(3)(1).  If it is for a fixed percentage of the annual valuation of the held assets, it is called a unitrust CRT or CRUT and regulated under Treas. Reg. § 1.664-3(a)(3)(1). There are other kinds of CRTs including the NIMCRUT, SCRUT, FLIPCRUT.

We hope to discuss those in future articles.

WARNING:  This information has been prepared for entertainment, educational and information purposes only.   It is not intended to constitute legal advice and should not be relied upon in lieu of consultation with tax professionals in your own jurisdiction with whom you have contracted.  It may not be current by the time you read this information as tax laws are frequently revised.