“Why expats are ditching their US passports”  a recent news article, that as of today is still on the front page of Yahoo, goes on to tell us.

3,000 Americans around the world renounced their citizenship last year. Meet five U.S. citizens who have given up their passports — or are thinking about it — to escape an overly complicated tax code.

The article goes on to profile these five U.S. citizens (or former U.S. citizens as it goes).  The depiction of these five individuals rings true to the majority of stories I’ve ever heard from people who have formally renounced their citizenship.  None of the people here are mega-rich (in fact most seem to be fairly average joes) nor are they political extremists looking to make a point.

They are people for whom keeping a U.S. citizenship just no longer made sense.

Here is an excerpt from CNN Money that reinforces the point. 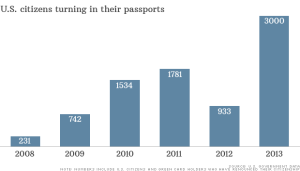 
The measure, approved by Congress in 2010, is aimed at recouping some of the hundreds of billions the government says it loses each year in unpaid taxes.


“They’ve become so complicated — the increased filing obligations over the years,” Westerfield said. “You see more people giving up their citizenship or relinquishing their green cards … Individuals [are] wanting to simplify their financial affairs, and just pay tax and report to one jurisdiction.”

Westerfield said that the first wave of renunciations in 2010 coincided with a part of the law that requires individuals to report foreign assets worth as little as $50,000. That’s in addition to a separate provision that forces Americans to disclose foreign bank holdings larger than $10,000.


Renunciations dipped in 2012, but now another part of the law is kicking in.

The new provision requires financial institutions to report all foreign accounts held by Americans.
“People find that intrusive,” Westerfield said. “Just because you live your life outside of the U.S., most of your assets are foreign assets. [Americans are] saying enough is enough.”


The law has prompted some banks to kick out their American clients rather than comply. Penalties can be high if banks make a mistake reporting U.S.-held accounts, even if they are basic checking and savings accounts.”

Now back to the story of our 5 US expats, what do they gain from keeping their citizenship?

Closed doors, both socially and financially, making doing business tough and banking in many places impossible.  Piles of paperwork, shifting reporting requirements and expensive accounting bills.  Double taxation, breaches of privacy, and the lifelong burden of paying into a system that gives you nothing back.

Here is one of the profiles

I renounced my U.S. citizenship in 2011. After I did it, I was so emotional that I threw up outside the embassy.

During my renunciation, I broke down. It was like getting a divorce. America gave me my education, a good career path, and I came from a beautiful part of the country. This was very hard.

Before I took the last oath, I asked if I could change my mind. The embassy worker said maybe, with official permission. But I still went through with it.

My decision to renounce was triggered when my bank threatened to close my account because I was American. What would I do without a bank? Americans in Switzerland were having trouble with their investments, getting credit cards, and some weren’t even getting loans.

I’ve been in Switzerland since 1990, and became a citizen in 2005, because I wanted the right to vote where I was living. The Swiss can tell I have an American accent, and I’m often explaining that I grew up in the U.S. and have a daughter who still lives in the Boston area.

Filing taxes from abroad had always been a real pain. I was double taxed on my full pension, but it didn’t bother me so much to pay taxes — it was the annoying paperwork. I used to do my own taxes, but I started going to a professional when I learned about the new disclosure laws. I’m glad I did, because there were a lot of forms. Tax prep costs me about 1,000 Swiss francs ($1,123) a year.”

None of the individuals profiled appear to have made the decision lightly or out of anger.  These people have made lives for themselves around the world, many never intend to return.

I make this point because this is the basic framework that everyone reading this article has to draw their conclusions from.  Even if you had no previous opinion on this subject, these peoples stories seem to paint a clear picture of reasonable  people doing something that just plain makes sense.  If a person chooses to renounce citizenship (from any country) that is their business.  It should be given no more thought by the public than a person moving to a new home in another city, state or province.

Take a look at the comments section below the Yahoo article.  Here is the link again.

Like most comments sections on most websites things get pretty ugly fast.  There are quite a few well thought out comments to be sure, but most take one of two routes…these are either a sort of  “good riddance” blind disdain for the greedy traitorous defectors or the scornfully righteous musings from the “America is dead and it’s the Governments fault” crowd.

It’s my tendency to fall into the latter category, it’s just so easy to blame things on the Government!   Others like to blame big corporations and the 1% crowd.  But playing the blame game is a waste of time for all of us.

Don’t find faults…find solutions that suit you (and let others suit themselves!).

In the past year I’ve been to about a dozen countries, Peter Macfarlane has been probably been to double that number.  We travel the world looking looking for countries that offer solutions and opportunities that aren’t available elsewhere.  We draw on a large international set of people we trust to help us dig deeper, to find things that are normally reserved for those who “know the right person”.  We make sure to know those people!

We write about what we find and put it in our Members Area, that knowledge, experience, and those contacts are the basis of our business.

You can vent your frustration, spar with the crowd, tilt at windmills…or you can let us help you find the solutions you need.

Remember there is no perfect country and there doesn’t need to be!

Today it’s easy to treat countries like service providers, picking and choosing among them where you will live, spend time, bank, do business, base your company.  Do what makes sense for you, your family and your business.