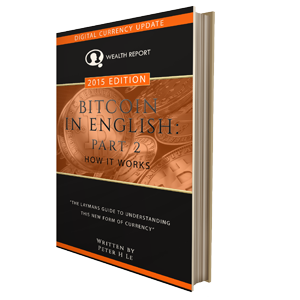 We inherently know that language is embedded unconsciously within us, so we can communicate with each other. Humans communicate with each other in many ways, including speaking, writing, and physical gestures. With language in particular, humans have developed hundreds of languages that reflect their culture, expression, values, and ultimately, their view of the world: how they live and perceive within it.

Hence, you could say that “Computer Programming” or “Geek” is a new human language all its own, like English or French or any of the other traditional language groups. It uses the same characters as English, but the words and characters are rearranged into a different structure, a structure that, just like French, you would not readily understand. So any English reader, who normally cannot read the language of French, may not be able to read the language of Geek either.

This is why so many people have difficulty understanding Bitcoin, and why programmers have a hard time explaining it to people who literally do not speak their language. Programmers should take note of this. Don’t expect people to understand you. We don’t speak your language! We don’t speak French. We most certainly don’t speak Geek. For the love of God, speak English!

This is the main frustration I deal with as a consultant for clients who want to use technology. The Geek world and non-Geek world each speak their own language, and so many things get lost in the translation between the two. I have to bridge and help both groups understand each other, by literally being an interpreter between those different worlds.

Likewise, this is the fundamental challenge to getting the broad mass of people comfortable with understanding new technology, like Bitcoin. We simply don’t have enough translators or interpreters to explain it to everyone who doesn’t speak Geek.

Bitcoin is a book that was written by an author fluent in the language of Geek. No I don’t mean Greek. Over 11 million people speak that native tongue. But it might as well be Greek for most people when it comes to understanding Bitcoin. It’s just that obscure and abstruse. I’m sure you feel the same way when geeks talk about Bitcoin with foreign words and tech jargon. You have absolutely no clue what they mean.