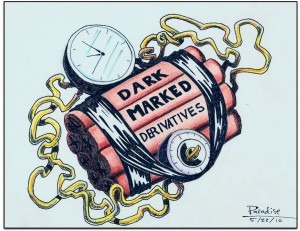 The “Will She … Won’t She” Debate, regarding whether or not Janet Yellen will soon announce a rise in interest rates, rages on, and on.

That is, if she personally makes any such announcement, at all.

Highly conspicuous by her absence recently, from the Jackson Hole Federal reserve jamboree, it was left to her purported “Deputy”, Stanley Fischer, the former Head of the Israeli Central Bank, to announce the ‘non-announcements’ at the conclusion of that farce, fuelling speculation that Yellen is on her way out, to be replaced by Fischer, as was always the plan.

Given the potentially “tectonic plate-shifting” ramifications of the next “decision” though, regardless of who really makes or announces it, we really should take a brief look at the state of play on the Interest Rate front.

What has focused minds, raised heart rates, and heightened blood pressure of course recently, is the fact that the Federal Reserve meets again this Wednesday and Thursday, 16th and 17th September.

Fed meetings are always the closest guarded of secrets obviously at the best of times, and given the sensitive nature of what they make decisions about, not to mention the potential trillions of dollars that are at stake, depending on which way those decisions go, that’s hardly surprising.

But what has made an already fraught process, even more complex in recent years, has been the recent reluctance on the part of the FED, even to follow their own hints and nudges!

Alan Greenspan’s deliberate habit of dealing in obfuscatory language it seems, has evolved into full blown misdirection and misleading.

So with that in mind, let’s review some of what we do know for sure.

Firstly, we know that Interest Rates haven’t risen since 2006 … almost a decade ago now.

Secondly, we know that if indeed interest rates do rise this week, it will be the first time in 6 years that they have risen above an effective rate of 0%.

For example, as far back as 2014, the Federal Reserve, in an attempt to provide some stability to markets that were already creaking under the weight of their own insane policies, announced that it was going to “link Interest Rates to the U.S. unemployment rate”, claiming that they would “raise rates” when the unemployment figure rose to fell to 6.5%.

Today, almost eighteen months later, thanks to freshly massaged figures and a huge rise in jobs that are only part-time, the unemployment rate has not only fallen past that 6.5% purported “tipping point”, but has dipped as low as 5.1%, as of last month.

Not that the employment figures seem to have impacted the number of those on Food Stamps in the USA it seems, which has now stood at in excess of 45 million for well over 4 years – a program that started off in 1969 with only 2.8 million recipients … that has now grown to 15 times its original size! 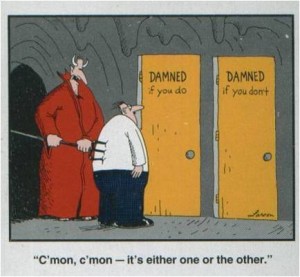 Still, it seems that “expert opinion” is massively divided on the advisability, even the possibility, of even a minuscule, controlled rise in interest rates to boost the economy.

The Fed’s recent policy of setting various pathetic “lines in the sand” that would supposedly trigger a rate rise, only to renege on those commitment when those same lines were inevitably crossed, has only raised Fed Watcher’s fears that the Fed has painted themselves into a tormented “damned if you do … damned if you don’t” corner!

Most disconcerting of all though, is that various heads of the regional Feds, have gone public in recent months with conflicting and contradictory “advice” on the timing and advisability of rate rises.

Even the IMF now is on record as advising against the move.

In fact, the dispensing of such contradictory signals by the Fed has become something of a habit, a habit that is beginning to smell like deliberate obfuscation.

And that level of obfuscation, can be nothing else but deliberate policy. 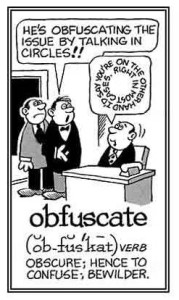 Even former Chairman of the Federal Reserve, Ben Shalom Bernanke, admitted, in a private meeting to the executives of several Hedge Funds, back in 2014, that in his opinion “rates would not normalize” any time during his “lifetime”!

Hence it seems likely that any upcoming rise in interest rates this week, would have to be both cosmetic window dressing, as well as short-lived.

The recent “crying wolf” rhetoric then has reached such a high pitch, that the majority of commentators now suspect that, once again, the Fed will “leave rates alone”.

But, the caveat on all of that, is the residual fear that many observers have, is that at some point the Fed may attempt something of a “controlled demolition” and re-set, hoping that they can contain the inevitable fall out, and use the ensuing destructive chaos to create a new Cashless Society order.

If that sort of talk and thinking turns out to be correct obviously, then all bets and gloves would be off, and we would be facing wholly uncharted waters.

But why, apart from the obvious Market volatility, the China Crisis, and Shemitah Cycle concerns, is the Fed in such bind and so “caught between a rock and a hard place”? 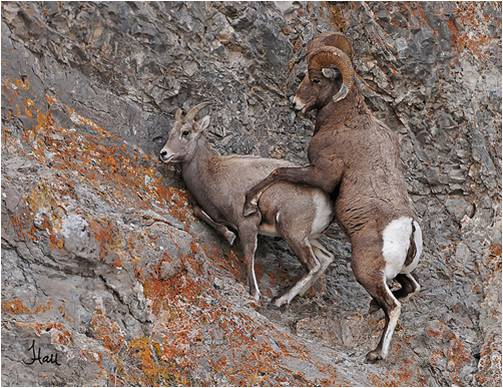 For many years before the 2008 blow out, even granite-hardened veterans of the markets like Warren Buffet, were warning anyone who had a pulse and would listen, that derivatives were W.F.M.D.s … “Weapons of Financial Mass Destruction”. 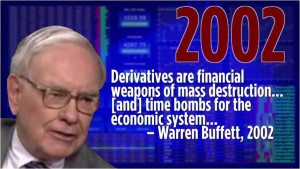 The issue that “strait jackets” the Fed then, is that even a tiny increase in the base interest rates, has such a devastating effect on the derivatives market; estimated to be in the hundreds of trillions, even up to $1.5 QUADRILLION … especially when in excess of 75% of them were created for the very purpose of hedging against movements in interest rates!

Now when that “immovable object” is headed on a collision course with the “irresistible force” of usury, then Bernanke’s warning words about their being “no normalising of rates” in his “lifetime”, start to make a lot more sense.

… and so do Janet Yellen and Stanley Fischer too!

Problem being … simply the sheer size of “Mount Derivatives”, and the sheer inevitability of Usury destroying an economy.

And what is positioned, right on the very volcano pinnacle of Mount Derivative?

Remember, fully 75% of derivatives are Interest Rate Derivatives, hedging a precarious Bond market that is similarly wedged between a rock and a hard place! 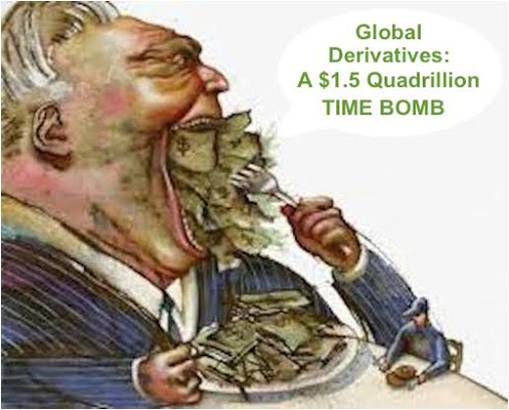 Of course, the TBTF Banks, the “Too Big To Fails”, own by far the Lion’s Share of these Derivatives Debt Time Bombs.

No wonder then, that they can treat Obama, and any other political leader for that matter, as their own rag doll. 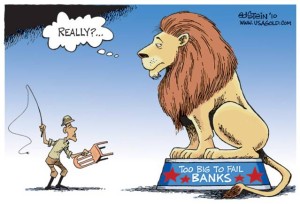 The bottom line is quite simply …

Bonds then, and their shadow “minder” cousins, Derivatives, designed to protect the current fraudulent money creation system, are in the biggest bubble in financial history, one that massively dwarfs the mere Real Estate bubble that ruptured in 2008.

It is a Bubble that is deliberately fed by current Central Bank policies.

When that bond and derivatives bubble bursts … which they will … it won’t just be the Bear Sterns and Lehman brothers of this word that will fail … it will be entire nations.

And sadly, there to pick up the pieces, with be the very Central Banks that manufactured the debt virus in the laboratories of usury in the first place.

We can only hope that when that time comes, that enough people will be receptive to the message of those who see the whole fraudulent Central Banking charade for what it is.