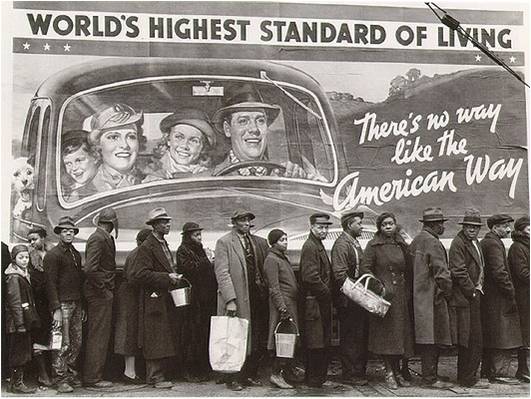 Even before the ink was dry on the paper promises made to the “Baby Boomer Generation”, the reality on the ground, as well as in the bread queues, foretold a very different outcome.

In truth, that outcome was much more like that which threatens to overwhelm the current crop of “Political Paper Promisers”.

Because in true style of King Canute’s fawning advisers, they may as well be praying for the “tide not to rise”

And just as King Canute’s feet did NOT enjoy divine protection, just because his courtiers swore he was God and could “hold back the waves”, the Baby Boomer Generation is not immune to the incoming waves of the “Laws of Demographics”

The fact is, that with Student Debt now the most delinquent of all debts, and with its total now exceeding even that of Credit Card debt now, it’s hard to see who is going to buy the assets of the Baby Boomers when they come to “cash in” and retire.

It seems then, that almost wherever we look right now, critical “divergences” are developing in once highly and tightly correlated economic data

But the charts below though, surely have to count as two of the most significant and unmistakable warning signs.

The generation that was supposed to help fund the retirement of the Baby Boomers, not to mention simultaneously spend sufficient money into the general economy, so as to keep the whole show on the road, now seem to be declining, just as they are especially needed.

And as the next graphic “graphically” demonstrates, the trend may have been with us for a short while, but it seems a distance away from reversing any time soon. 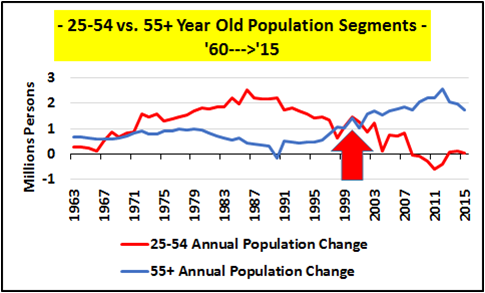 But not only are these “producers” declining in number, that are also drastically declining in “spending fire power” too.

Again, just at the very point when it is needed most.

The assumptions that were made, many, many decades ago now about just how the welfare & retirement prosperity of the Baby Boomer Generation was going to be funded, have proven to be, one, highly ambitious, and two, suspect to say the least.

Even a quick glance at the charts above, is enough to confirm the sheer size and scale, of what is undoubtedly now an ongoing problem and funding gulf.

On one side of the economic divide, sits the retiring class, who while they may remain financially afloat, by default and necessity they’re still nonetheless, forced to spend around 40% less into the economy, than they had previously been able to do, while they were still working and earning.

And then on the other side, we have the debt trapped students, and the just shy of 50 million Americans who are now wholly dependent on the State’s SNAP Food Stamps system, just in order to be able to gather enough food to survive!

Hardly a “tax base” likely to inspire confidence in the hearts of the Baby Boomers!

And then squeezed in between these two slices of the “dependency sandwich”, is the much-oppressed, and government-attacked productive pastrami of the Middle Class!

The group routinely drained of their money (by governments of all colours) who they see them as their own private C.C.C. (Convenient Cash Cow) whenever they need to fund the laying of the next brick of their prison control system!

With huge Corporations effectively “sitting this one out”, insulated and virtually unaffected by the game of “musical chairs” going on around about them, the Corporation are left in peace to avail themselves of the “best economic justice that money can buy”.

Hence it is left up to the retired and “would like to retire” Middle Class, to effectively fend for themselves as best as they can.

Now they can either keep being fooled into continuing to support the Ponzi scheme system that is ultimately leeching them dry like the parasite that it is. Or, they can quickly “get savvy” and work out how the Corporations manage to protect THEIR asses and assets, and learn how to give themselves some of the same protections and advantages.

And essentially, that’s where we believe that The Q Wealth Report really comes into its own … in a thoroughly practical way.

Yes we try to keep readers in touch with relevant stories and topics, but in many ways we realise that we are “preaching to the choir”! We know that you all know what’s going on!

No, where we really feel that Q Wealth can make a difference to your lives and finances, is in “taking the front foot” with you, in personally taking you through the action steps needed, to turn your undoubted “good intentions”, into fully “achieved goals”.

So please, don’t wait until the State-run Ponzi schemes have depleted, deflated, or inflated, your assets to oblivion, and into the trash can of broken promises … take the initiative yourself today, and contact us. Or at least become a Member and grab yourself the stack of genuinely valuable reports and advanced advice available there.

Remember too, that we’re all ready, willing and most importantly, able to help.

There’s no harm in realizing that we have been lied to … the damage is only in procrastinating until its too late to do anything constructive to protect our loved ones.

As JFK once astutely said … “ An error doesn’t become a mistake, until we refuse to correct it.” 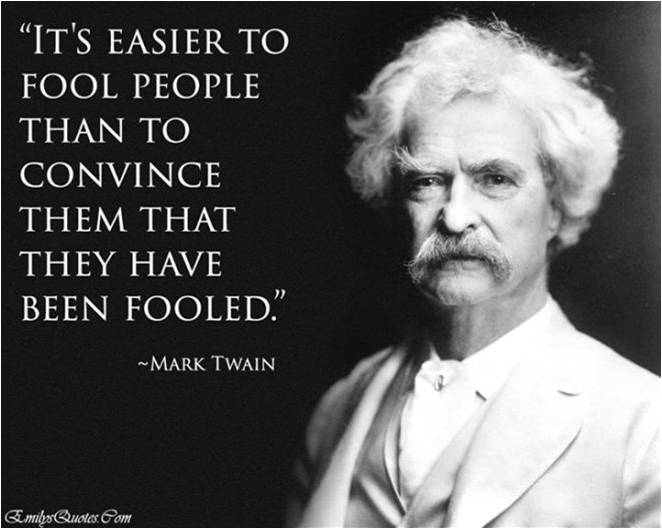 As always, To Your Secure Financial Future