Norway’s largest bank, DNB Bank, is just the latest in a long line of financial institution to call for the scrapping of cash.

We detect a bit of a theme here!

Scandinavia though it seems, seems to be somewhat “leading the charge” towards an Orwellian “Cashless Society” in many ways, with DNB Bank joining similar calls already, from leading banks in both Sweden and Denmark.

On Friday, the DNB Bank released a report that concluded with these words :

“There are so many dangers and disadvantages associated with cash, we have concluded that it should be phased out.”

Very little ambiguity about their position there then.

It would, however, be wrong to say that such calls represent official Norwegian government policy though … at least not yet.

Although we all know from experience, two things.

One … is that what banks want, banks usually get!

And two … is that there’s nothing quite so UN-reassuring, as a “government assurance”!

And so right on cue, enter the Norwegian Finance Ministry Spokesman,  Torre Vamraak, with precisely that.

“There are many, including the elderly, who still want to use cash and that must be allowed. Moreover, it isn’t unproblematic for privacy to make every transaction traceable”

How long though, such soothing words can withstand Banking’s inexorable push for “full spectrum dominance” over everyone else’s privacy, remains to be seen. 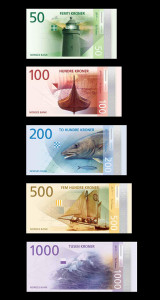 It has become about as blurred as the new design for their bank notes, due to be introduced in 2017.

The traditional design of the front of the new notes, raised very few eyebrows, as you can “clearly” see.

However, it is what is to happen on the reverse of the same notes, that could be construed as symbolic of the blurring of those lines that we spoke of earlier. 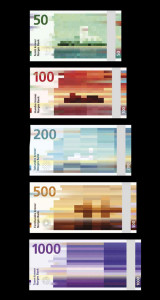 Here is what the reverse of those same bank notes is going to look like.

As you can “see”, (at least you can if you screw your eyes up tightly enough!) the images are about as clear dependable as the Finance Ministry’s “reassurances”!

But why are Banks closing the noose so tightly on cash?

Well the answer to that has several strands, which we will try to summarise at least.

The first thing to remember of course, is that Banks are running more scared than we perhaps imagine.

And the driving reason is, ironically, the result of Banking’s own desperate and cynical policies.

Over the course of the last few G20 summits, banking has manipulated and cajoled Finance Ministries around the world into creating what are effectively “Bank bail-In” laws.

These laws ultimately transfer the responsibility for “bailing out” failed banks, away from deeply unpopular (not to mention career-threatening) tax-payer-funded “bail-outs”, and on to the backs of the Bank customers themselves.

Secondly, as has been clearly seen by the recent utter carnage in the markets, following the Fed’s “face-saving” decision to raise interest rates last December, in an economy that was suffering from a recession, everywhere else except on “funny-money-funded” Wall Street, a “Negative Interest Rate Policy” (NIRP) is a very real possibility.

Recognising it as nothing less than a new form of legalised theft, people will not take ZIRP lying down … and banks know it.

Banks know, that as soon as people realise that they have a “leaky bucket”, then they will remove their “water” from it, and put it into a vessel that doesn’t leak.

In other words, banks realise that while their savers may well not like the current “Zero Interest Rate Policy (ZIRP), they are not stupid enough to allow Banks to steal money from them via NIRP, just for the “privilege” of parking their money in a bank account.

And so it is in order to “block that exit” and to legally and physically prevent depositors from being able to withdraw “cash” from the banking system, that the entire “Ban Dangerous Cash” bandwagon is now rolling.

The Central Banking elites know, that unless they ban cash, that their desperate NIRP policies are going to crash and burn.

Of course the double benefit for them, as well as their government partners though, is that such a move to an all-electronic “Cashless Society” system, also represents the ultimate realisation of their sweetest Orwellian State dreams.

The benefits and temptations for Banking though, are irresistible for them though, that’s the hideous problem.

On the other hand, People’s choices will be reduced to …

1.  Putting up the literal theft of their money on deposit

2.  Spending it digitally, exclusively within the by then digital and cashless banking system.

A comparison between the contrasting outcomes for both parties from such a development makes for painful reading, to say the least.

But as is so often the case, few realise the dangers, and fewer still are resisting it and preparing for it.

The NIRP and Cashless Society “barbarians” are right outside the gates, and while, to paraphrase The Borg, “resistance seems futile”, all is not lost, yet.

Perhaps enough people will wake up to the privacy-crushing ramifications of NIRP and its Siamese twin, the Cashless Society, before it is too late.

But don’t hold your breath waiting for the mass awakening will you!