Tuesday, October 9, 2007 started as a nice day in New York City. A lovely early fall day, with the temperature still a balmy 80° at 2:00 in the morning. By evening, though, the temperature had dropped twenty degrees, the clouds had rolled in, there was thunder and rain.

As with the weather, there were some hints of trouble here and there on Wall Street. But all in all, things could not have seemed better. Little did we know, the stormy end of 10/9/07 signaled a very large bubble that had just popped.

That was the day when the Dow Jones Industrial Average hit its historic peak. From there, it was all downhill — slowly but steadily at first, and then violently after last August — until the Dow bottomed (for now) on March 9 of this year. Over that span, the index lost 54% of its value.

It’s been a crushing blow to just about everyone. But it’s already being referred to as the crash. As if the unpleasantness were now all behind us. More likely, in the future it will be seen as, simply, the first crash.

Don’t believe it? In a moment you will, when you see the scariest graph of the year.

But let’s quickly recall what’s already happened. During the late, great housing boom, interest rates were at microscopic levels, while bankers were encouraged to grant home loans on little more than a wink and a nudge. In order to inflate their balance sheets, those bankers resorted to all sorts of gimmicky, adjustable rate mortgages (ARMs), whose common feature was an interest rate that would eventually reset. That is, it would balloon somewhere down the road. And those most likely to come quickly to grief were the riskiest borrowers, who held loans known as “subprime.”

“But not to worry,” borrowers were told. “Betting on ever-rising home prices is the safest wager in the whole wide world. If you have problems with cash flow when the ARM resets, your house will be worth a lot more, so you can simply sell it and walk away with a nice chunk of change in your pocket.” Uh-huh.

The bankers themselves were a little more concerned about the deterioration of their portfolios. They took out insurance in the form of credit default swaps (CDSs). These were a brand-new invention in world financial history, allowing mortgages to be sold and resold until they were leveraged 20 times over. They became the shakiest part of a huge global derivatives market, with a nominal value in the tens of trillions of dollars.

For a while, this Ponzi scheme even worked. But then, as they had to, the ARMs began resetting, and there were defaults. Then more of them. Because at the same time, the housing market was cooling off and the economy was stalling out. More and more people were trapped in a situation where they owed more on their home than they could sell it for. Many simply mailed their keys to the bank and moved on.

All of this wreaked havoc in the derivatives market. Sellers of these exotic packages could no longer establish what they were worth. Buyers couldn’t determine a fair price and so stopped buying. As the ripples spread through the world financial system, trust disappeared and liquidity dried up.

Now consider that the base cause for all that dislocation was the subprime sector. And how big is that? Not very. Subprime mortgages account for only about 15% of all home loans. Their influence has been way out of proportion to their numbers, because of derivatives. Here’s the good news: the subprime meltdown has about run its course. These loans were resetting en masse in 2007 and the first eight months of ’08. Now they’re pretty much done.

And the bad news? No one in the mainstream media seems to be asking what should be a pretty obvious question: What about loans other than subprime? Truth is, the banks didn’t just trick up their subprime loans. ARMs were the order of the day – across the board.

Now, here’s that frightening graph we referred to earlier. … 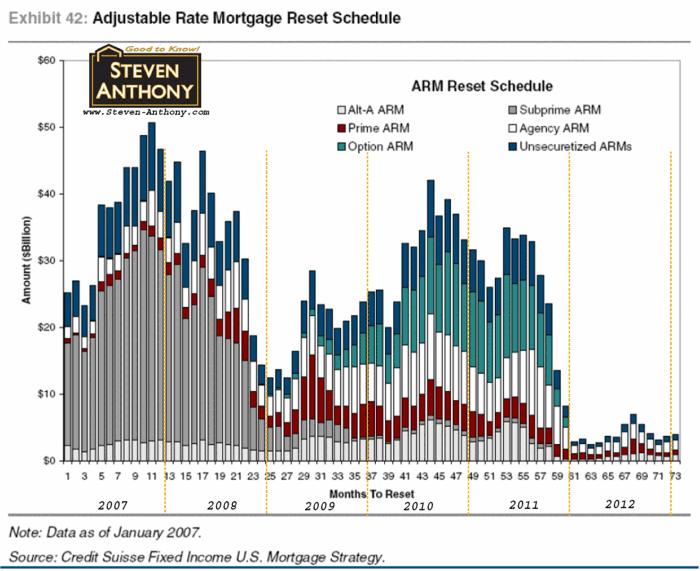 Take a good, long look. You can see that from the beginning of 2007 through September of 2008, subprime loans (the gray bars above) were resetting like crazy. Those are the ones people were walking away from, sending a shockwave from defaults and foreclosures smack into the middle of the economy. Now they’re gone.

The ARM market got very quiet between December 2008 and March 2009, hitting a low that won’t be seen again until November of 2011. Small wonder a few “green shoots” have poked their heads above ground. But in April, resets began to increase and will reach an intermediate peak in June. After that, they tail off a little, going basically flat for the next ten months.

It’s not until May of 2010 that the next wave really hits. From there to October of 2011, the resets will be coming fast and furious. That’s 18 months of further turmoil in the housing market, and the beginning is still nearly a year away! (Although the months in between are likely to be no picnic, either.)

While it isn’t subprime ARMs that are resetting this time, neither are they prime loans. Those eligible for prime loans wisely tended to stay away from ARMs in the first place, as indicated by the relatively small space they take up on each bar.

No, the next to go are Alt-A’s (the white bars), Option ARMs (green) and Unsecuritized ARMs (blue). Alt-A’s are loans to the folks who are a small step up from subprime. Unsecuritized loans are a 50-50 proposition; either the borrowers were good enough that they weren’t thrown into the CDS pool, or they were so risky no one would insure them.

Those two are bad enough. But Option ARMs are the real black sheep, loans with choices on how large a payment the borrower will make. The options include interest-only or, worse, a minimum payment that is less than interest-only, leading to “negative amortization”-a loan balance that continually gets bigger, not smaller. Imagine what happens with those when the piper calls.

Once the carnage begins, will it be as bad as the subprime crisis? That’s the $64K question. Perhaps not. For one thing, subprime loans were a much larger chunk of the market when they started going south. For another, there’s been a lot of refinancing as interest rates dropped; that should help ease the default rate. And the government has massively intervened, with measures designed to prop up those who would otherwise lose their homes.

On the other hand, we’re in a severe recession, which wasn’t the case when the subprime crisis started. More people will be unable to meet payments. And the housing market has continued to decline, pressuring both marginal homeowners and banks that can’t sell foreclosed properties.

Is the stock market’s next 10/9/07 on the way? Yes. Which day will it be? That’s unknowable. It could be in a week, or not for another year.

But make no mistake about it, the second crash is coming. It can’t be prevented, no matter what desperate measures Obama and his hapless financial advisors come up with. All we can hope for is that, with a little luck, it won’t be as severe as the first one. But it will last longer. We aren’t even in the middle of the woods yet, much less on the way out.

The order of the day is to be very defensive. There will be few safe havens, but they do exist. Read our report on “48 Karat Gold,” a gold-related, conservative investment that has continued going up even while the common stock market bombed. It’s not too late to profit… click here to learn more.