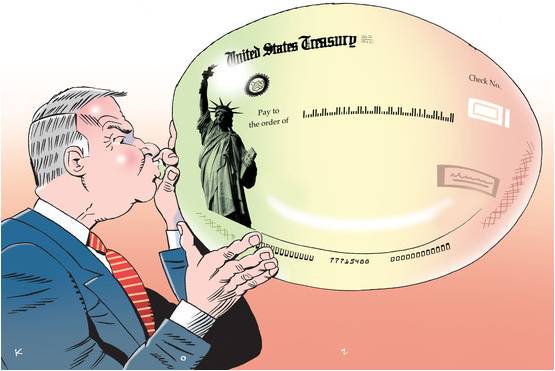 No one doubts that “The Stock Market” is Big. Everyone “knows” that it’s big.

But “The Bond Market” is bigger … much, MUCH bigger.

In fact, according to the giant McKinsey Research team, The Bond Market is estimated to be worth a staggering …

But don’t take our word for it.

On September 26, 2014, Bill Gross, a “living legend” on Wall Street, the man dubbed simply, “The Bond King”, purportedly “jumped before he was pushed”, from the company that he had co-founded, way back in 1971; the now giant “PIMCO Fund”, a company with bond funds estimated to be worth in excess of $1.2 Trillion Dollars.

Ironically, 1971 was the same pivotal year that the world experienced the so-called “Nixon Shock”; the time when President Nixon uncoupled the U.S. Dollar from gold, a story by the way, that we will be returning to in future posts.

Gross made his “jump” from a “comfortable” $200,000,000 a year salary (not including bonuses), to an undisclosed salary, at a much smaller fund called “Janus Capital Group”, a company based well away from Wall Street, in Denver Colorado; and a Fund with only around one tenth of the funds under management, that PIMCO has.

And it’s from his office there, that Bill Gross posted what amounts to an extremely melancholy, pessimistic overview of the aftermath of the “Crash of 2008”, “The Great Recession”, and the subsequent “Recovery”, as well the causal factors of all three.

The following image then, is drawn directly from his post of only a few days ago, 4th May, 2015, and it more than hints at his general overview of the markets.

Now rumours abound obviously, about precisely why he left PIMCO, and the rumours naturally include it has to be said, the indisputable facts about the poor performance of the PIMCO Fund itself, in the year before his departure.

But the underlying message, only made more obvious by looking at the performance difficulties of even major players in the Bond Market like Gross, is that the very “Engine Room” of the entire “Money Creation System” itself, is under enormous, if entirely predictable structural pressures.

We here at Q Wealth though, can put it no better than Bill Gross himself, so here, unusually, is an extended quote from his seminal article; an article that perhaps more than most, we ought to take heed of :

A “sense of an ending” has been frequently mentioned in recent months, when applied to Asset Markets, and the Great Bull Run that began in 1981.

A “20 banger” followed for stocks, as Peter Lynch once described such moves, as well as a similar return for 30 year Treasuries, after the extraordinary annual yields are factored into the equation: financial wealth was created as never before.

Fully invested investors, wound up with 20 times as much money as when they began. But as Julian Barnes expressed it with individual lives, so too does his metaphor seem to apply to financial markets:

Many prominent investment managers have been sounding similar alarms, some, perhaps a little too soon, as with my Investment Outlooks of a few years past titled, “Man in the Mirror”, “Credit Supernova” and others.

But now, successful, neither perma-bearish nor perma-bullish managers, have spoken to a “sense of an ending” as well.

Stanley Druckenmiller, George Soros, Ray Dalio, Jeremy Grantham, among others, warn investors that our 35 year investment Supercycle may be exhausted.

They don’t necessarily counsel ‘heading for the hills’, or liquidating assets for cash, but they do speak to low future returns and the increasingly ‘fat tail possibilities’ of a “bang” at some future date.

To them, (and myself) the current Bull Market is not 35 years old, but twice that in human terms.

Surely they and other gurus are looking through their research papers to help predict future financial “obits”, although uncertain of the announcement date.

Savor this Bull market moment, they seem to be saying in unison. It will not come again for any of us; unrest lies ahead, and low asset returns. Perhaps great unrest, if there is a bubble popping.

Policymakers and asset market Bulls, on the other hand, speak to the possibility of ‘normalization’ – a return to 2% growth, and 2% inflation in developed countries, which may not initially be ‘bond market friendly’, but certainly fortuitous for jobs, profits, and stock markets worldwide.

Their “New Normal”, as I reaffirmed most recently at a “Grant’s Interest Rate Observer” quarterly conference in NYC,

depends on the less than commonsensical notion, that a global debt crisis can be cured with more and more debt.”

So as the pathos-filled cartoon that we have shown below from the same page depicts, the adjustment to a “post-permanent” Bull Run world, will be a painful, not to mention a rudely awakening one, for many ill-prepared investors and entrepreneurs.

When the very system of “money creation” itself, not to mention the governments “debt-spending” facilitation system, are in such dire jeopardy, as they undoubtedly are right now, then we all face a very uncertain future indeed.

And that is why we urge all of our Q Wealth Report readers to please take seriously, warnings from genuine, disaffected “insiders” like Bill Gross.

And it’s also why The Q Wealth Report Team here, do what we do in the first place.

All we can urge you to do then, is ask you to “please get in touch” HERE, and allow us to help.

The “Old Ways” of operating, simply don’t work any more.

It’s time to safeguard what you have, and it’s time to “shore up your defences”.

If you have secured your copy of the newly revised 2015 Edition of “The Practical International Banking Guide”, then seriously, congratulate yourself; you have made one the wisest moves you can possibly make right now.

The Guide, as the name suggests, is first of all practical!

It is a “time proven” Guide, that distils 20 years of experience in the world of international offshore banking, and it walks you, step by step, through the protective and proactive measures that you can take now, in order to shield your assets, and protect your family’s legacy, for the future.

Government grasping & confiscation, and seizure & forfeiture, can only accelerate, as an increasingly desperate Central Banking and taxation/theft system, struggles to fund its burgeoning, wholly unfunded debt obligations, as well as its unaffordable social welfare and healthcare commitments.

So once again, we would urge you to re-read Bill Gross’s words extremely carefully … and then contact the Q Wealth Team.

The team has multiple strategies, tactics and structures, that can shield you from the worst excesses of what is coming.

While no one method can ever 100% guarantee complete protection, what the strategies do guarantee to do for you, is to make your assets immeasurably more difficult to confiscate, putting you into that rare, highly protected category, that is often considered simply “too difficult and time consuming to pursue”.

All we ask is that you don’t “make it easy for them” to use you as a “cash cow”. That is essentially the advice we’d ask you to heed, and there are many ways to protect yourself from being wide open to their attacks.

The most cost effective way to begin, is by becoming a Q Wealth Member.

Doing so allows you access the multiple free Reports, Fact Files and benefits on offer in the Members Area, including the 2015 Edition of “The Practical International Banking Guide”, which is alone is normally offered at $97.00, when bought individually.

Membership is extremely reasonable as you will see, given the value offered.  Check it out HERE:

But whichever way you choose to go, please don’t leave it until it is too late, to protect yourself, your loved ones, and your assets.