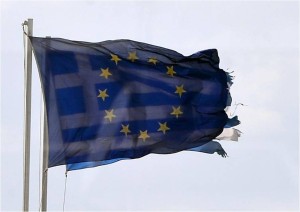 Few images have more succinctly or symbolically captured the essence of what has been happening to Greece recently, than the one above.

A forlorn Greek flag, almost torn to ribbons by storm winds, is shrouded and barely recognizable, behind the dominating overlay of a European Union flag

Similarly, Greece’s national sovereignty, shredded by storm winds of ‘weaponized debt’, is also barely recognizable, suffering as it is, under a suffocating, deadening overlay of European Union and European Central Bank diktats.

The net result, is that not only are millions of Greeks now questioning just how genuine the last 6 months of so-called “negotiations” have been, not to mention the utterly pointless and ignored referendum (didn’t the government call it, and then flat out ignore the result?) but many around the world too, are similarly angry, and are making their feelings loudly known.

So appalled have many been by the ‘tyranny of the terms’ that especially Germany demand Greece “agree to”, that one of the biggest trends on Twitter recently, has been this one …

Now strong language and a reaction like that, could have been simply put down to solidarity from those sympathetic to the plight of the Greek people.

Or it could also have perhaps been put down to a natural empathy and protective reaction, brought on by having to watch the leader of ‘The Cradle of Democracy’ being treated like a “beaten dog”!*

*That phrase was used by two separate attendees (both ‘in the room’ during the final negotiations) to describe how Prime Minister Tsipras was treated during the final humiliating capitulation that was forced on him.

The only problem with such interpretations though, that dismisses the ‘Coup view’ and are overly-charitable to the EU-ECB … is that they ignore one thing.

And that is … that the third member of the Troika, the International Monetary Fund themselves – NOT an institution renowned for taking a soft stance on debt negotiations – have also spoken out strongly against the EU/ECB action!

Action that many people, like them, not only realize CANNOT work, but also see as being “vindictive” (Economist Paul Krugman), vengeful and even spiteful.

So when a split like that occurs, within the very Troika itself, then you know that something is very badly wrong.

Interestingly, the word “Troika” is a Russian word, that refers to the kind of ‘three-horse-pulled chariot’ that dates back to antiquity.

Perhaps then for the first time in this entire sleight-of-hand Greek Debt Tragedy, one of the three horses of the Greek Debt Apocalypse (or more accurately their deficit apocalypse) is finally ‘pulling their fingers out of their ears’, and is showing at least some degree of realism.

Interestingly too, yesterday, tagged as an “Exclusive”, Reuters ran the following story, headlined as :

What they report, even by un-democratic, draconian EU standards, is quite shocking.

They detail how an already exhausted Prime Minister Tsipras … “tried to walk out of negotiations” … long before the so-called “compromise deal” was finally thrashed out and imposed on him; a “walk out” that would surely have resulted in a “Grexit” from the Euro. 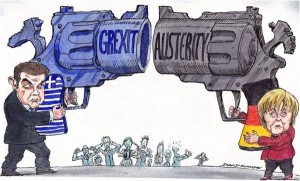 As a side note by the way, there is huge scepticism, even from some Eurozone member countries themselves, as to whether the legal framework even exists, for a member to be “ejected”, Grexit-style, from the Euro currency union.

In fact, some analysts go further, and argue that the very reason that this issue is such a political ‘hot potato’ in the first place, is because under the Treaty-based, unanimous, ‘all-in-or-all-out’ system that the EU imposes on member States, there is actually NO provision for a individual member to even voluntarily leave!

Not without triggering the demise of the entire Eurozone project, that is.

Just one member leaving – so the argument goes – invalidates the entire legal foundation upon which the Euro itself is based. 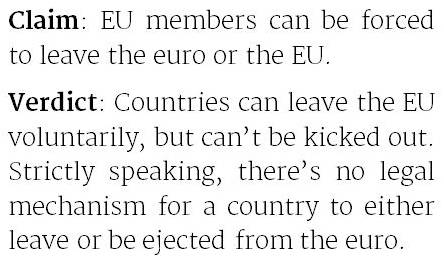 All of this then, adds weight to what the former Greek Finance Minister, Yanis Varoufakis, warned about as recently as April 2015; after he was cynically removed by Prime Minister Tsipras himself, from the country’s Negotiating Team.

He controversially said the following …

“The problem is that once you’re in,

it goes just like the Eagle’s song, ‘Hotel California’ –

“You can check out any time you like, but you can never leave!”

“I’d rather cut off my arm, than accept bad deal!”

Despite the resounding Referendum “NO” Decision, still ringing in his ears, Prime Minister Tsipras on the other hand, was able to accept such a deal 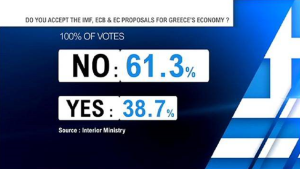 The leather jacket-wearing Varoufakis then, the Maverick Academic Economist- turned Motor-Biking Political ‘Street Fighter’, who was ‘helicoptered’ in only a few months ago, to serve in the highest financial position in the Greek government, did little to disguise his contempt for the political hypocrisy of some of his European negotiating counterparts.

In fact, he wore their hatred of him, almost as a badge of honour! 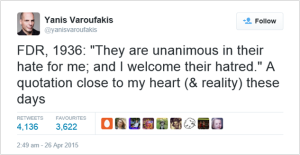 Unfortunately though, the European Union political class, simply has no room for such ‘straight talking’, and it was clear from the very outset, that his style of “Tell It How It Is” communication, would simply have to be marginalised and side-lined.

There were just too many “vested interests” who stood to lose out, were he to gain too much leverage. 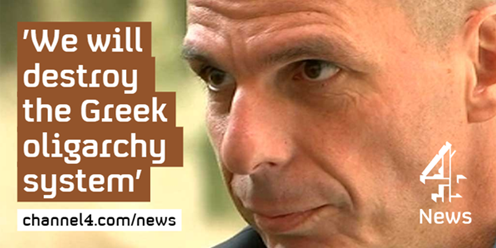 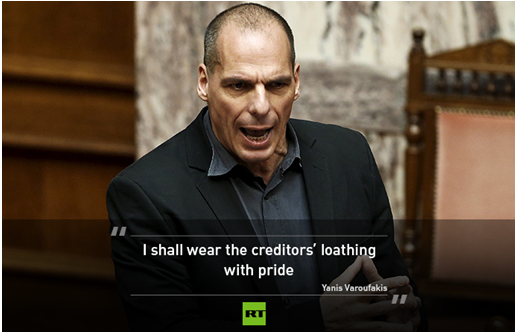 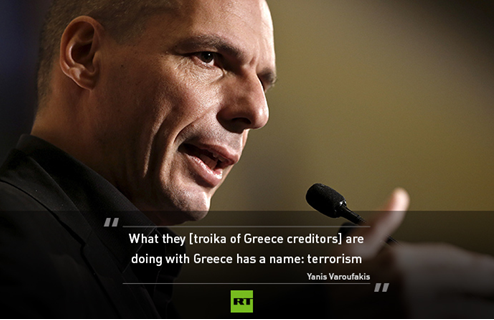 Perhaps it was “fighting talk” like that then, that lay behind why the Troika so quickly and heavily “leaned on” Tsipras, to have Varoufakis removed from the Negotiating Team …

Something tells me that the Troika simply had to make that move though.

While they were eventually and finally able to grind Tsipras down in that room … getting the same level of capitulation from ‘Die Hard Varoufakis’, might just have been a bit more of a challenge! 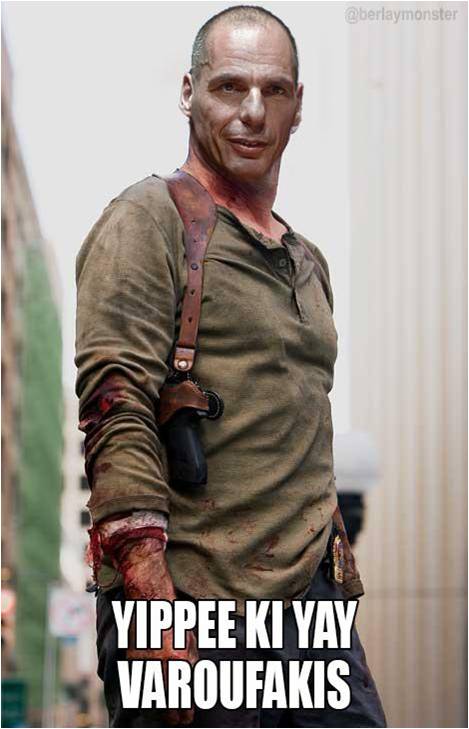 But leaving such speculation aside … the logical question that follows must be this one.

If, as we will soon see via a Financial Times report, that Tsipras was actually prevented from “leaving the room” as he withdrew from the talks … to eventually be made “an offer he couldn’t refuse” … then just who had the kind of uber-power necessary to prevent a democratically-elected Head of State, from using those powers to simply walk out of a room?!

According to the Financial Times though, the bullying wasn’t limited to just Greek Prime Minister Tsipras.

It turns out that the German Chancellor, Angela Merkel, also tried to leave the negotiations, at the same time as Tsipras, and she too was prevented from leaving!

According to the FT then, both the German Chancellor and Greek Prime Minister …

“… rose from their chairs at 6 a.m. on Monday, and headed for the door, resigned to a Greek exit from the Euro.”

Now when two Democratically-elected Leaders, of two purportedly ‘Sovereign Nation States’, both mutually decide to “end talks” and “walk out” of negotiations, then regardless of whether anyone else agrees with their reasons, or not, surely no one has the power to “dictate” to them, that they have to stay!

Well, apparently someone indeed DOES have such power!

It seems that when it comes to Sovereign governments, who are also members of the European Union (or the EUSSR as some prefer to call it) then the normal standards of democracy, simply don’t apply.

The European Union leadership it seems, are simply not prepared to countenance elected representatives of the People, who are delivering the “will of the People”, to interfere with their own undemocratic Grand Plan!

And so it was then, that as the two Leaders both “made for the exit” (in more ways than one) that the REAL wielders of power in the European Union were unmasked for all to see.

The report goes, that as the two Leaders made for the Grexit, that a voice boomed out across the room, saying …

“I’m sorry … but there is no way you are leaving this room!”

And so who was it, that had the ‘authority’ to tell Chancellor Merkel and Prime Minister Tsipras to effectively “return to your seats!” like school children?

It turns out it was the unheralded, and defiantly NOT-democratically elected, ‘President of the European Council’ … 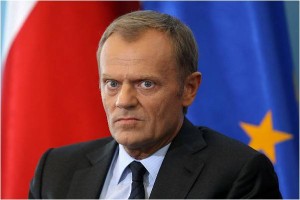 Ironically, Tusk, a former Prime Minister of Poland (a position to which presumably he was elected at some point!) is quoted in the past to have said that …

“I cannot agree to such a coalition, where one party has all the power, and the other party has to deal with all the problems”!

It seems then, that since recently being able to enjoy the relatively ‘stress-free’ lifestyle of a politician who no longer needs to bother with the ‘inconvenience’ of Democracy, or even an ‘electorate’ for that matter, that Tusk has abandoned his principles regarding ‘one-sided deals’!

It must be quite the power trip though I guess, to be able to tell the purported leader of the most powerful country in Europe, to “Get back to your chair!” like she was some rebellious school girl.

So there we have it … the Greek Saga continues as we know, and its clear that “The Fat Lady” has most definitely not sung yet either. This one as they say, is going to rumble on!

How things will eventually play themselves out in the land of the Acropolis, very few know for sure.

But, for those who may be interested, The Q Wealth Report have prepared an 8,000+ word 3-Part Special Report on Greece.

It specifically draws on the historical parallels between Greece’s problems and that of the Central Bank of England, who were suffering their own financial crisis, back in 1914, as the ‘Gold Standard System’ was crumbling around them.

The Bank of England were relatively painlessly “rescued” by the UK Treasury, and the shocking details of how that was done, make for sobering reading when compared with what seems like the deliberate chaos and “punishment beating” going on in Greece right now!

The contrast and hypocrisy are at times sickening to read.

The 3-Part extended Special Report is available in the Q Weath Members Area, along with many, many other valuable reports and resources.