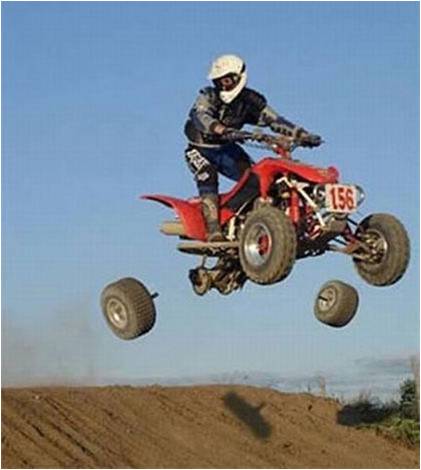 Are the “wheels” about to fall off the Great Recovery?

If they are, then we may be in for a very … “uncomfortable landing” indeed.

While no one here at Q Wealth is making any specific date predictions to that effect, in one very important way, the specific timing of exactly when “the wheels might come off” the latest prolonged Bull Run, is actually less important than simply ensuring that we are prepared “in advance” of it happening.

In this post then, we’re going to highlight a few simple charts that really ought to have even the least prepared investor, scrambling to make sure that their “alternative financial plans” are firmly in place.

The problem can be, that in the “blizzard” of financial news and advice from “TV talking heads” available today, it’s sometimes too easy to just “glaze over” and simply trust that “everything will work out ok” … simply because “it always has done in the past”.

But as all financial services advertisements are legally bound to say …

And yes, that adage works both ways!

The following charts then, serve to remind us all, that we are already living through a great “Disconnect” in the data coming out of the economy.

Such times of great disconnect are always a sure sign of desperate, high level manipulations going on behind the scenes.

During such times, the normal rules of the purported “free market”, become something of a myth!

Whenever a situation develops, where basic “Cause & Effect” rules of economic activity are violated like this, you know that the markets are being artificially contrived; truly the most dangerous of all situations for the private, “small investor”.

Take the following chart for instance.

It is a “composite snapshot”, taken earlier this year, in early March 2015.

The chart began to plot what looked like a classic “Disconnect” pattern that began to form in late 2014. 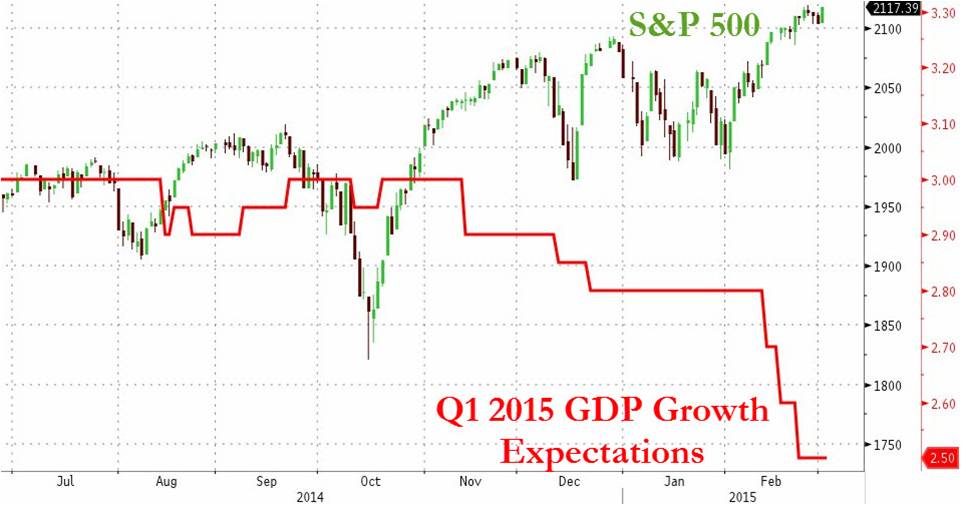 As you can see, a definite divergence started to appear last year, in October 2014.

But what has happened to that emerging, fledgling “pattern” since then?

And they didn’t make for pleasant reading.

Now according to the research of many sceptical analysts, such “official figures” have already long been “massaged” and manipulated.

But even leaving such “shadow statistics” aside for the moment, it is clear even from official figures, that at least “one half” of our “divergence scissors” has only widened further.

A further “tell tale” chart we thought was worth bringing to your attention,is the one that appears below.

It is a chart that tracks the growth rate of US Exports, a key economic indicator.

The chart is interestingly “overlaid” with the two major previous recessions of the 21st century … the “Dot Com Crisis” … and the “2008 Crisis”. 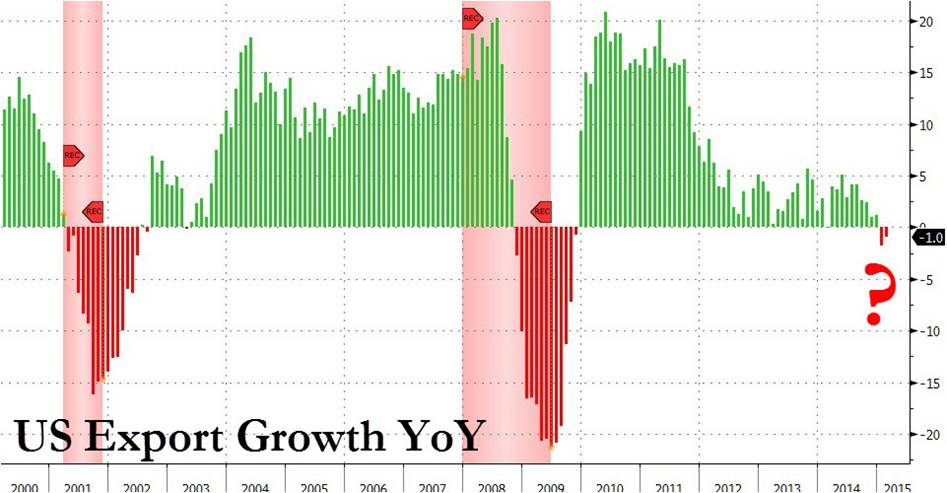 As you can see once again, the signs are not the healthiest that have ever existed.

But all we want to point out in all of this really, is that if you haven’t already got your Emergency Plans in place, then please do so as soon as you possibly can.

The Team here at Q Wealth are ready for your message or call, and we have multiple time-tested, battle-hardened strategies waiting for you.

At the very least, make sure you get the recently released 2015 Edition of “The Practical International Banking Guide” into your hands.

Taking out a full Q Wealth Membership would be even better … Not to mention better value, given the sheer amount of reports and help that is included in the package.

Unlike “Tips Sheets” or “Investment Advisories” though, Q Wealth Report takes a measured approach to “all time highs” in the S&P and other stocks and shares charts.

Playing the “prediction game” regarding “turning points” and “pivot points” with regard to already “frothy” stock levels, is a notoriously perilous exercise; one that is fraught with danger and potential disappointments.

We have all seen stock and share prices that have remained stubbornly “over bought” for a very long time.

Instead, the aim of this post is to simply remind readers of what they really already know …. that “what goes up, always comes down”, but also, that the current “market highs” may be artificially maintained for longer than expected, especially given that bond returns are currently so precarious and deeply uncertain.

The underlying message in all of this then, is that the best precautionary advice is to have your best defensive & diversified strategies in place … early!

There are many alternative, international, offshore jurisdictions, that are far better equipped to “weather the storm” when it arrives, that the USA and the EU.

The longer that this current “divergence” between GDP and S&P goes on, the more likely that a potentially damaging “spring back” to a “closer correlation” is.

So be cautious, of course, but more importantly, be prepared.

Take the best safety advice that we can currently give you right now, and do whatever it takes to access “The Practical International Banking Guide”.

The economy at them moment, is at the very least, heading into quite literally, completely “uncharted” territory in multiple ways.

And so our best defensive strategies need to be in place, “up to the task” and “fit for purpose”.

As the old trading adage goes … “No one ever went bankrupt by taking profits too early”.

Well similarly, we say that “No one ever went bankrupt by taking precautions too early”, either.

So take special care in these strange, complex and manipulated days, and ensure that you are as protected as you can possibly be.