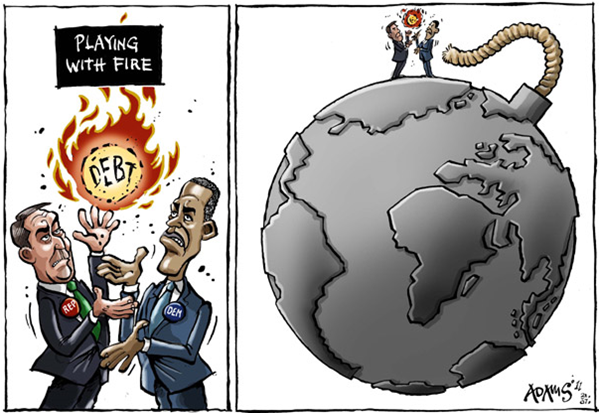 When Debt Crises hit the world’s stock markets, they are not random acts of chance.

They are instead, the artfully contrived inevitable consequences of “Time Bomb” debt policies”, set up at regular intervals to “harvest” the progress that the emerging markets make, in an attempt to effectively make sure they don’t get “ideas above their station”.

There is an endlessly repeatable, but insidiously poisonous, rinse & repeat “Debt Crisis Formula”, that Central Banks have been using for decades now, to ‘asset strip’ entire economic regions.

Right now though, in August 2015, we are once more seeing the exact same Debt Crisis Formula, wreaking havoc in the economies of the Emerging Nations.

All tolled as we speak, 23 stock markets around the world are tumbling or in recession, with more bound to be added in the days ahead, as the ripple effects spread.

All of these national stock markets are tumbling, after experiencing peaks, either towards the end of 2014, or earlier this year.

It seems that after the rout of their Stock Markets in the last few days, the USA is now reaping its own share of “Friendly Fire” and “Collateral Damage”, as a result of the fraudulent folly of Federal Reserve policies.

The collapses that are currently accelerating around the world, are primarily due to the planned ‘Perfect Storm’ collision of the two separate sides of the Fed’s “Debt Crisis Formula”.

This double squeeze, placed initially on emerging nations, is devastating many regions once again.

The Debt Crisis Formula always begins initially, when the Federal Reserve creates the conditions whereby their own satellite US Banks are able to offer irresistibly cheap, dollar-denominated loans, to the banks and businesses in the target countries.

These loans were offered at discount Interest rates, when the Dollar is at a low value, comparative to currencies in these target countries.

These “loss leader” loans are like ‘catnip’ to always stressed local banks corporations, all of whom compete with their international counterparts, often on the slimmest of margins, and all are eager to make savings on the cost of their expansion and investment loans.

When Interest Rates in their home countries have already been manipulated higher, often by their own country’s Central Bank colluding with the Federal Reserve it has to be said (!) they really have no choice but to take out such dangerous, “Time Bomb”, dollar-denominated loans, loans that are mathematically certain to blow up in their faces eventually.

Right now, that is exactly what is driving the multiple declines in one emerging nation after another.

Comparatively higher local interest rates were set several years ago, in preparation for the invasion of cheap, dollar-denominated loans.

Local banks and industries back then, were left with a “no-brainer” no-choice decision to make

Either take the “strings attached” Dollar loans, and temporarily but un-sustainably “succeed”, or don’t take them, and instantly fail to be able to compete with their neighbouring exporting counterparts.

In truth, with the way that the “Global Village” economy has been so fraudulently set up, it would have been economic suicide for any country to walk away from the chance to use such “time bomb” loans.

Because those countries knew perfectly well, that their neighbours were absolutely going to accept them, and they in turn be able to undercut them on price, for the provision of similar goods, to the rest of the world.

So essentially these countries were “on a hiding to nothing”, long before they even signed on the dotted line for such suicide loans.

Add to that, the current turmoil in China, as it seeks to adapt to its new role in the world, after only temporarily being able to take advantage of the 2008 Crash, and it’s no wonder that the Emerging Nations are suffering a contrived set back in growth.

Right now, with the US NASDAQ having just dipped below its “200-Day moving average” for the first time since 2013, that “blowback” this time, may be far more severe than they had ever bargained for.