“ That Was The Week That Was ”

The Chinese have a saying … “May you live in interesting times” … and if nothing else right now, we live in just that.

After the global stock markets suffered an £$11 TRILLION DOLLAR loss in the Quarter of this year, this last week has seen strong rallies in stock markets across the world.

The Dow Jones was typical, up over 500 point on the week, with similar percentage gains reported across most of Europe.

So do the moves reflect a ‘sea change’ in sentiment?

Is the “worst behind us”?

Should we get the champagne out?

Well maybe not so fast.

Many analysts see these recent rises for exactly what they are.

The recent rises are a reaction to the huge short positions that have been accumulated by traders, in preparation to defend against the possibility of a major crash.

These short positions have become huge, and have presented an irresistable money extraction target.

And so the holders of many of these short positions have had to frantically cover their assets, by buying into the market, to cover losses incurred, as market makers and others “ran the stops” in an attempt to flush out all that “troubling” short money, betting against a major fall.

The following graphic then, succinctly illustrates the artificial nature of the current “rally”, sparked as always, by that favourite manipulation trick of Plunge Protection Teams around the world … “running up the futures market”.

Notice the obvious “tell” from the last few days in October … with the sharp rise in futures prices, which led the rally, being accompanied by a sharpe decline in volume! 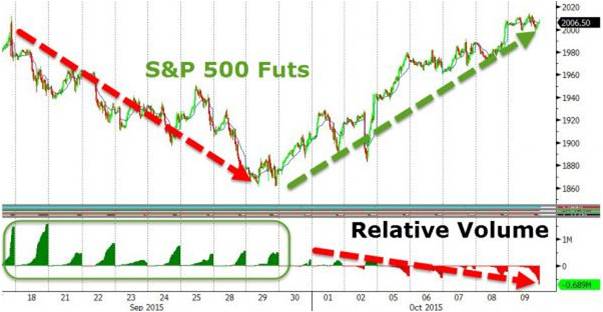