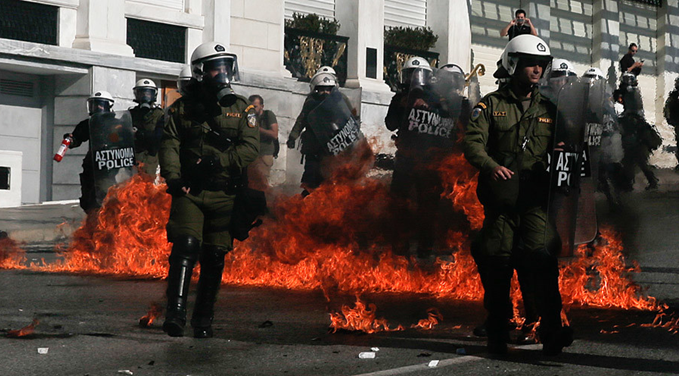 As I start to write this piece, the world’s attention of course is focused on the horrific Friday the 13th Paris shootings, and our thoughts are with those who have died and are suffering.

But undoubtedly there will be millions of column inches dedicated to that over the next few days, so I’ll resist the temptation to cover it, and stick to what I had originally planned to cover.

But, no doubt in the time ahead, we’ll re-visit the events in Paris, and take a look behind the headlines.

But for now, let’s look at Greece … yet again, sadly.

Following further riots in Athens, and the calling of a General Strike at the same time as the government threatens to bring down even harsher reprisals against those with mortgage arrears, Greece, yet again, finds itself grabbing the headlines for all the wrong reasons … albeit inevitably headlines that are “pushed down the page”, by the events in Paris.

Nonetheless, it’s likely that what is going on in Athens right now, will prove to be every bit as likely to change our lives, if not more so, than what has just happened in Paris.

The violence that you see depicted above, broke out ahead of the visit of the Troika monitoring delegation, tasked with overseeing the implementation of Greece’s austerity plans, and her debt repayment schedule.

But given that back on the 13th July, 2015, the Syriza government, led by Alexis Tsipras, “agreed” to the punishing terms imposed by the Troika, then surely the government must have condemned this General Strike, at least, yes?

In fact, not only did they not condemn it, the Labour Department of the Syriza Party actively called on people to participate in the strike, and to join forces against the Creditors!

Syriza government MP’s, and even Ministers, went public and made announcements to the people, that participating in the strike would be “good for the negotiation process”.

Now As we reported some time back, during the fraught days of the ‘Grexit’ negotiations, the EU ended up having to use some of the most extreme, totalitarian measures ever witnessed against a country’s leaders, in order to get their way.  Even going so far as to tell German Chancellor Angela Merkel, and Prime Minister Alexis Tsipras to “Sit down!”, and preventing them from even leaving the meeting room, after they’d both agreed that Greece should leave the European Union.

That “decision” though, was simply deemed as “unacceptable” to the leaders of the EU Collective, and during the following 17-hour meeting, culminating in a marathon, overnight, sleep-deprived final interrogation (I mean “negotiation”! Or do I?) session, a brow-beaten and bullied Tsipras, eventually buckled and capitulated.

He left that meeting to to tell the Greek people, (who had armed him with a 62% mandate from the referendum!) that their decision was indeed “unacceptable” to the EU Politburo.

The subsequent two-faced Janus impersonation that Tsipras has had to pull off since then, has been remarkable in itself, and speaks volumes about the dearth of real choice that exists in Greek politics, as the people are continuously forced to vote between “the lesser of two evils” … which always still results in more evil of course!

Actually, one of the jokes that has been circulating during the General Strike, was repeated yesterday by a former minister of the Greek government.

He said that while “Alexis” was attending the General Strike Demonstration, “Tsipras” was meeting with the Troika! 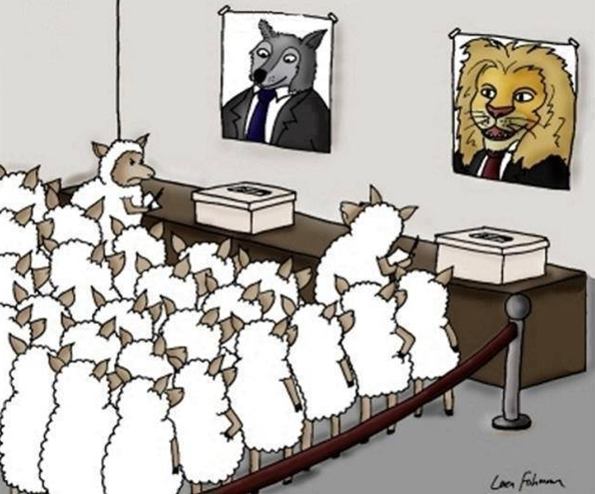 Alexis “Janus” Tsipras then, is becoming quite the slick practitioner of the facing both ways at the same time trick!

Just not 100% sure how the Greek people are going to react to such chicanery in the long run … but I have a pretty good idea.

The same ex-Minister though, went on to make several more serious points, alluding, first, to what we already know; namely that none of the “bail out funds” get anywhere near Greece, but instead, they go directly to restoring European Banks’ balance sheets, in danger as they are, from the ever-present and ongoing risk of a Greek national default, due to a declining Greek GDP … which has almost halved since Greece joined the EU! 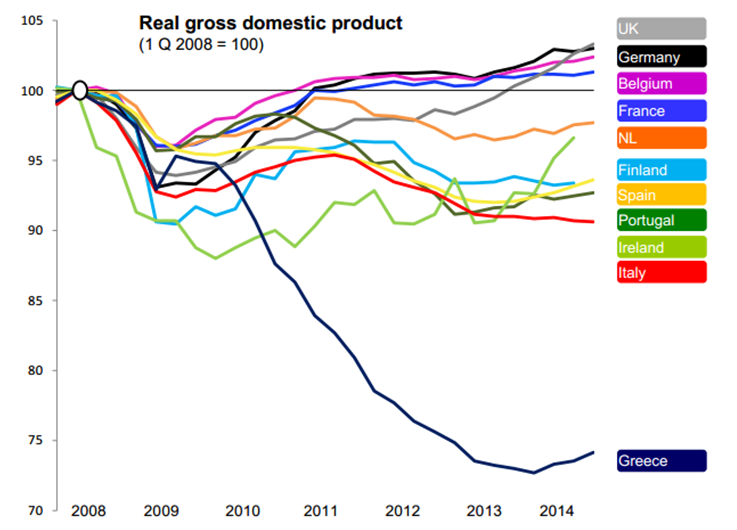 None of the money then, that the European Union is “sending”, ends up in, or helping, Greece. It all goes to prop up the purported “lenders”

And now, of course, inevitably they’re already planning a third bail out! 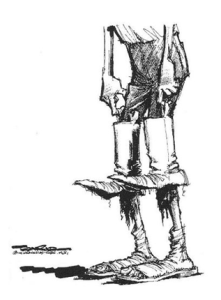 Simply because, contrary to the popular exhortation, you cannot lift yourself up by pulling on your own bootstraps!

And so too, you cannot “borrow your way out of debt”, most especially not, when the “terms” of your debt repayment (Austerity) include the confiscation of much of your means of production, along with many of your previous sources of national income!

Confiscated along with all of that of course, has been the hope of the people.

And once that has gone, history teaches us that violence is never very far away.

Touching on the subject of violence, especially on the Molotov Cocktails that were thrown, the same former Minister had his own take on who was actually throwing them!

He interestingly said this …

“As for the incidents that happened today, most of the so-called ‘anarchism are mainly police officers, who get dressed up as anarchists, to create these ‘tear gas incidents’, which disperses the people, and prevents them from making larger demonstrations.”

Of course there is a mountain of photographic and video evidence that has been accumulated over the years, to support such “conspiratorial” claims, and it’s well known that government agencies do carry out such “false flag attacks”, in order to manipulate and “earth” the justified anger of the people, who feel “ruled over” rather than “represented”. 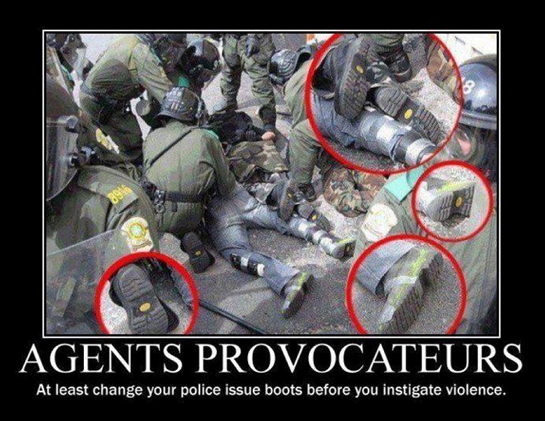 His comments do seem to make sense, especially given that the General Strike enjoyed at least the tacit support of the government, and was encouraged by the Syriza Labour Department in particular.

It seems then, that this may have been the first time in history, that a sitting Government actually incited its people to rebel against its own policies!

We live in strange times indeed.

But perhaps the Syriza Party was gambling on instigating just enough “controlled” street violence, in order to grab some TV headlines, to enhance their bargaining position with their EU debt-masters, but not sufficient violence, to threaten their own stability, via a Romanian-style “Nicolae Ceausescu” moment!

Hence they sent in the crowd dispersal riot police, to “mop up” after their “agent provocateurs” had ensured that the mob didn’t grow too “unmanageable”!  Works every time!

But despite the “stage managed violence”, what remains abundantly clear is that Greece is merely further down exactly the same “road”, down which other counties are currently “kicking” the same “debt can”!

They are all kicking the can of insoluble, un-payable and economically terminal debt.

So in an unavoidably mathematically way, Greece is the early warning system, the “canary down the coal mine” for the rest of the world. And, what happens there, is relentlessly making its way to a country near you, namely you own!. 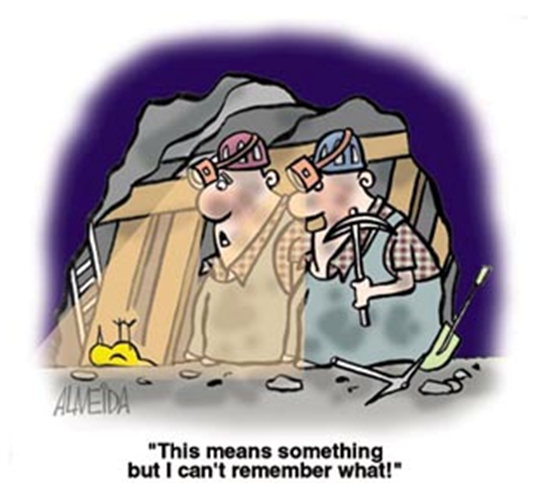 But one thing is for certain, the endless ping-pong soap opera between two wholly controlled Left and Right “Wings” of “governance”, is going to fix precisely nothing, when it comes to that debt problem.

The problem is much, much more entrenched and structural, than can be fixed by the petty vices and devices of the political operatives representing the Banking system.

As Thomas Jefferson once so eloquently put it …

“I sincerely believe that Banking establishments are more dangerous than standing armies; and that the principle of spending money, to be paid by posterity, in the name of funding, is but swindling futurity, on a large scale”

His words back then were prophetic. But today, no such “faith” in a “voice in the wilderness” is needed.

Today we have the benefit of hundreds of years of history, as well as mathematical proof, that Jefferson was right.

Remember that he also said that …

“It is incumbent on every generation, to pay its own debts, as it goes. A principle, which if acted on, would save one-half the wars of the world.”

So whether Greece’s debt crisis, (exacerbated as it is by it ALSO being on the front line of Europe’s exploding immigration crisis) spirals and descends from civil unrest, into civil war, remains to be seen.

But for now it seems, the political puppet masters aren’t quite finished choreographing the dance of debt that they insist that Greek people dance to.

Of course the additional reason why the Syriza government can’t make good on their promises to the electorate, is that they are just as constrained by the “immovable object” of mathematics as the Troika!

Clearly, neither the Troika, not Syriza, are prepared to let the Greek people know the truth. But I guess no one is really surprised to know that.

Both are lying, by telling the people that the current debt-based banking system can help them, or is anything close to sustainable or economic.

The only thing they are economical with it seems, is the truth, and they tell more lies that Tony Blair testifying before The Chilcott Enquiry! 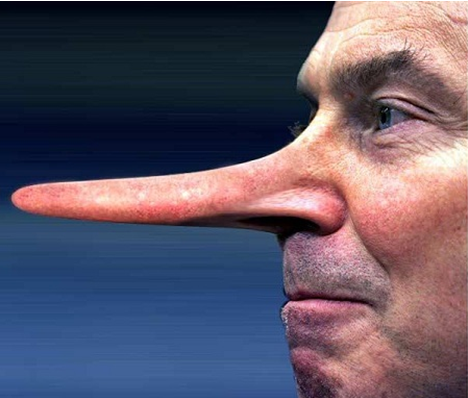 If Syriza were to be really honest with the people, they would tell the them that the Troika are right, in that Greece’s Debt to GDP ratio is terminally “holed below the water line”, and that the generous pensions and social welfare promises that previous governments made to them, are massively and impossibly “under-funded”, and current outgoings cannot be maintained, without going deeper into the very debt hole that has sucked their pension pot dry in the first place! 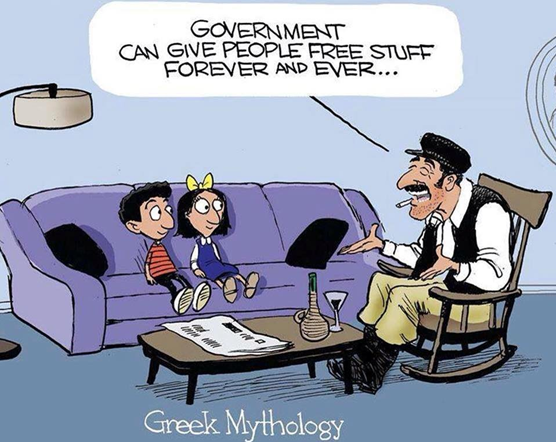 And if the ECB were honest with the people, they would have to tell them that even austerity can only “delay the inevitable” for a short while, and that the real problem is THEIR OWN fraudulent global banking system, that automatically “eats” usurious, never-created “interest payments”, cannibalising them directly from the over all Greek money supply, and siphoning them directly onto Banks’ balance sheets! 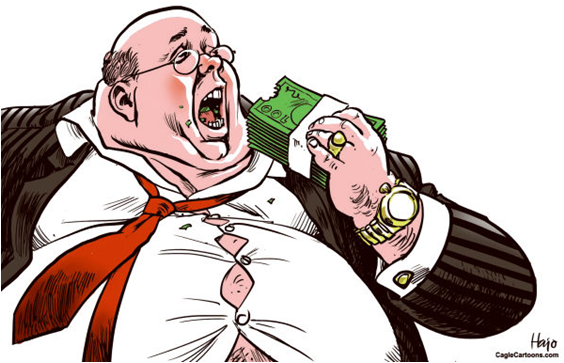 But it’s unlikely that any politicians, or bankers, will be making the Greek People wise the any of that, any time soon!

Until next time then,