Ultimately it is NOT about the money. Taxes collected in the USA cover a very tiny portion of the budget, most of it is deficit money created by bonds purchased by the Fed – the snake eating its tail as it were. It IS about control: chiseling away at the Swiss finance sector’s independence and Switzerland’s stubborn refusal to give up its sovereignty to the EU collective. 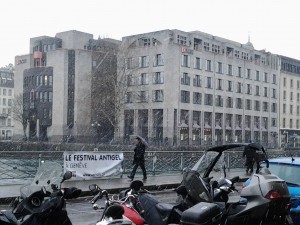 Photo: Icy times for Swiss Bankers. From one of my visits to Geneva in March.


.
If you’ve been following our views on the ongoing Swiss banking saga, you’ll have guessed that we are positively delighted that the Swiss parliament recently threw out the proposal put forward by the Swiss government, that sought to allow a waiver of the famous Swiss bank secrecy laws so that Swiss banks targeted by the US government could hand over information. It’s nice to see a parliament standing up for what is morally right and what the majority of Swiss citizens clearly want – that is, to keep their sovereignty intact.

Whilst I’m sure that the vast majority of Swiss bankers are rather happy about this development too, certain influential bankers are not. According to news site swissinfo.com:

The Swiss financial sector has also expressed impatience at finally finding a lasting solution that covers both future tax relations between the two countries and resolves the legacy issues of the past. “It’s in the best interest of the financial sector and each individual bank to resolve the US issue quickly and completely,” Urs Rohner, chairman of the board of directors at Credit Suisse, told the Neue Zürcher Zeitung newspaper… “A solution that seems painful at first sight is better than no solution,” he added. “To believe that one can push this issue to the back burner and that it will dissolve over time is unrealistic. That will not happen.”

Rebutting this, (now retired) friend of ours who has decades of experience in American-Swiss banking matters – we call him our in-house Swiss Gnome – writes:   “First of all, Mr. Rohner, you need to re-orient your thinking on this matter, as there will never be a ‘solution’ to this ‘problem’. Your capitulation in this matter (as in previous matters related to Swiss finance) will lead to ever greater demands from the IRS for data not even tangibly related to US citizens. Eventually these demands will include the increasingly chic word among American authorities ‘nexus’ – as in “you must give us all account data about all Swiss citizens and companies because we have determined that there may be a nexus between them and American assets somewhere in space and time.”

“Ultimately it really is NOT about the money. Taxes collected in the USA cover a very tiny portion of the budget, most of it is deficit money created by bonds purchased by the Fed – the snake eating its tail as it were. It IS about control: chiseling away at the Swiss finance sector’s independence and Switzerland’s stubborn refusal to give up its sovereignty to the EU collective.

“As an example of the IRS hypocrisy in these matters I need only point to US Treasury Secretary Jack Lew, who was revealed in his confirmation hearings to have a Cayman Islands account. Before him Treasury Secretary Geitner was given a special, one time exemption from paying income tax on a portion of his bonus-claiming that he did his taxes himself using Turbotax and made a silly error because of the software. I could go on and on…”

Besides capitulations inviting further attack from the Americans, each time the US scores a victory against Swiss banking, the European Union (especially Germany and the UK) will be baying at its heels demanding the same. Just over the weekend the English newspapers were again demanding the end to Swiss banking secrecy – including supposedly pro-free-market newspapers like The Times. Then, in no time at all, there will be a line-up of other countries demanding equal treatment to the Americans.

Switzerland as a nation should, as a matter of self-respect, a least try to resist this slippery slope, and that seems to be exactly what its parliament is doing.

Credit Suisse and a few big banks effectively want the Swiss government to authorize and indemnify them to sell out American clients.  They want this for commercial expediency, and to avoid having potential lawsuits hanging over them. They cannot sell out the clients to the IRS on their own, because to do so would be illegal under Swiss law. Therefore they need their government to pass a special law allowing them to sell out clients. The government has agreed. The parliament has rejected it.  Three cheers for democracy in Switzerland!