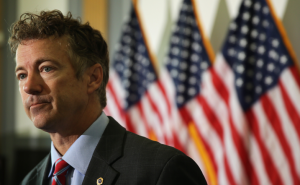 History could soon be made in the USA as Senator Rand Paul appears to be about to join six other republicans in a bid to sue the US government for acting in a manner that goes against the US Constitution. Here’s the full story:

Senator of Kentucky and Presidential candidate Rand Paul is to sue the Internal Revenue Service in pursuance of a court declaration that its Foreign Bank Account Reporting (FBAR) regime and the Foreign Account Tax Compliance Act (FATCA) are unconstitutional.

FATCA requires foreign banks to report accounts held by US persons back to the Internal Revenue Service so that the accountholders can be taxed accordingly. The six US expatriates who appear as co-plaintiffs in the suit (collectively filed under the name ‘Republicans Overseas Action’) say they have been denied normal banking services in the countries where they live, because the US authorities’ use of FATCA, and their wider campaign against offshore tax evasion, has deterred foreign banks from accepting American clients.

The Isaac Brock Society reports that Rand will join the six republicans in the lawsuit although according to Bloomberg a spokesman for Paul would not ‘confirm the Kentucky senator’s involvement’ in the suit, which is reportedly scheduled to be filed today in a southern Ohio federal district court. The US expat plaintiffs claim that the FATCA and FBAR provisions violate the US Constitution’s prohibition on ‘unreasonable search and seizure’, as they mandate the collection and reporting of confidential information without ‘probable cause’ or a warrant. They also claim that the heavy fines associated with the FBAR regime amount to ‘cruel and unusual punishment’.

The central argument deployed by Paul is that he, as a member of Congress, was denied his Constitutional right to vote on the intergovernmental agreements (IGAs) signed by the US Treasury Department with other governments to implement FATCA – which he claims is a violation of article II, section 2 of the Constitution. The Treasury regards these IGAs as ‘executive agreements’, and thus considers that they do not need to be approved by the Senate.

According to US tax law expert Jack Townsend, the case might present a ‘forum where expats’ claims of loss of access to banking services can be tested, to see whether they are anecdotal or systemic affecting large numbers of expatriates’.

An estimated 8.7 million American citizens are living abroad, and the number who renounce their citizenship because of tax filings obligations is increasing each year.

(Please note that if you are looking for assistance in acquiring a second citizenship, Q Wealth’s experts have many years’ experience in this field and can guide through the process. For initial information, check out our Second Passport Report here).