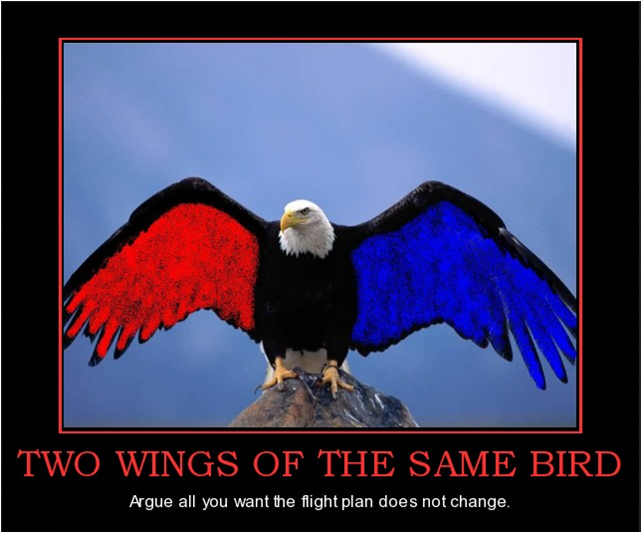 People of Greece! Vote Left “Wing” or Right “Wing”…It Will Make NO Difference …

…The Central Banking Flight Plan Will Stay The Same!

As widely expected, the Greek Prime minister, Alexis Tsipras, has made his move.

Yesterday (Thursday) he resigned as Prime Minister and called a General Election; the second in only 8 months, with a farce of a Referendum sandwiched in the middle, that the Greek People wasted their time even voting in!

The same sentiment could be expressed regarding this next upcoming
election too!

When Democracy is abused like this, and when the People’s so-called “representatives”, vote away the People’s ability to affect meaningful change, then a de facto state of tyranny exists, despite “appearances to the contrary”.

Just because the People are permitted to vote, does not mean that they are going to be “represented … as the People of Greece are finding out the hard way!

This next upcoming election then, is sadly destined to be as pointless as the last.

Tsipras, who has already shown himself to be a devious, slippery and untrustworthy political operator, took the cowards way out, after betraying his own party members in multiple ways.

He most certainly “jumped before he was pushed”, and in so doing, he spat in the face of internal democracy within his own party.

He has also shown himself further willing to abuse the entire electorate, by forcing them into voting so as to try to fix his own internal party political problems.

In taking this “nuclear option”, he flagrantly ignores the fact that he now has neither a mandate from the nation, nor his own party.

In such circumstances, it is a complete travesty that he has been allowed to embroil the entire nation, in his “little local difficulty”, caused by his out and out betrayal of his principles, his party, and the People.

Following a deep rebellion from within his own Syriza Party, Tsipras lost both the respect of his party faithful, and with that, his working majority in parliament.

His position was already completely untenable, and he was reduced to relying on a cobbled together coalition of “unlikely bed fellows”, in order to pass the bitterly contested and highly controversial Bail Out Bill.

In a desperate, last ditch effort then, to avoid a damaging Confidence Vote in his position as leader (which he feared he would lose) he yesterday resigned, barely 8 months after he was swept to power on a wave of optimism and enthusiasm that had ossified into a litany broken promises.

His assurances that the Syriza Party would pursue a “radical Anti-Austerity Program”, have proven to be nothing more than election-winning propaganda.

One by one, buckling under pressure from the Central Banking Troika, every one of his election promises has failed to materialise, and he has ended up only delivering a worse “deal” than the one the People rejected in the meaningless July 5th Referendum; the one he so desperately and disingenuously called.

Having delivered only ever worsening terms for the Bail Out then, his final act on Thursday, was to call for snap elections, moments before resigning.

But the Syriza rebels and the People, can spare themselves from hoping that the move portends any kind of victory.

Tsipras’s manoeuvring has been done in an attempt to circumvent the sentiment of his own Syriza Party membership.

Tsipras is now currently “speaking over the heads” of his fellow party members, and parliament, in the hope that the people will vote against the rebel members of his party, leaving him free to lead a less rebellious government, one that will not prove to be so difficult to whip into line.

These sort of events though are sickeningly reminiscent of the pseudo form of democracy that operates in multiple countries around the world today.

What the Greeks have had to witness in their leader, is a man pushing through exactly the same program of “tax increases” and “massive spending cuts”, that he claimed so vehemently opposed to, when he was on the election campaign trail!

Tsipras went on to then betraying his own Syriza party members, as well as their combined pre-election promises, acting outside the mandate he received from the electorate.

Yet despite such chicanery, he is still somehow being rewarded, by dint of the corrupt internal rules that govern how Greek politics works.

Here’s how that plays out.

How The Central Baking Status Quo Will Be Maintained

Immediately after Tsipras called for this second election (live on national television last night) he went straight around to the office of the President, Prokopis Pavlopoulos, the nominal Greek “Head of State”, and resigned, instructing Pavlopoulos to call fresh elections, which apparently could take place as soon as September 20th.

Bloomberg made an “interesting” comment about the decision to call for a snap election, saying that it would allow Tsipras the chance to …

“… shed unhelpful members of his party”!

Again, this hints at just how much the Syriza Party’s own internal democracy has been brushed aside.

Such a “purge of the Party” is considered a priority, especially before Greece has to face a “Review of Progress” in November by the Troika, as to whether they are meeting the terms of the Bailout, and whether they qualify for yet more “international aid” … that woolly, ill-defined phrase that cover a multitude of sins!

But … here’s the real kicker.

Get this….  Under Greek law, if an election is held LESS THAN 18 months after the previous one, the current Party Leaders, not the people, get to determine who is even ON the electoral lists!

Now consider what that actually means.

A prominent rebel in the Syriza Party, the former Social Security Minister, Dimitris Stratoulis, has already gone on record on television, as saying that the party’s so-called “Left Platform” faction of rebels, will break away from Syriza, and run the election under a separate banner.

He insists that the Greek people WILL get the chance to vote for a genuine  “Anti-Bailout Party”, not a mere propaganda one.

But, given the current and cosy, Left/Right rainbow alliance of the “strangest of bedfellows”, are the Leaders of the existing parliamentary parties likely to allow room for a rejuvenated Syriza Party 2.0?

And even then, is there any guarantee that such a “new improved recipe” Syriza 2.0, an even MORE Left Wing Party, would prove to be anything more than just another “Wing of the same Bird”; one that regardless of how much rhetorical “flapping” it does, has no effect on the direction of the Flight Plan?!

Given the cavernous contrast between the hoopla and Ra Ra optimism of the “Tsipras & Varoufakis Dog & Pony Show” earlier in the year, and what was actually been achieved, the signs are really not good.