Editor’s Note: we have just uploaded the latest version of our Panamanian Foundations Demystified Report to the members’ area of our website. 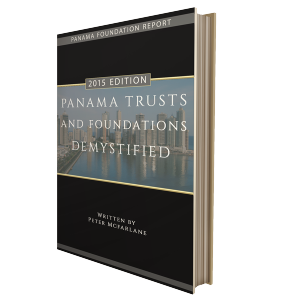 You might well have heard a lot of good things about the strong privacy benefits of the Panamanian Private Interest Foundation. As an asset protection and estate planning vehicle, it’s second to none. Most of my consulting clients who choose this vehicle are seeking to create a legal structure that will reduce tax liabilities, protect their hard-earned assets from lawsuits or claims, and make sure that on death, their estates pass to their chosen beneficiaries without unnecessary legal disputes or fees.

Few people understand what kind of legal animal a Panama foundation really is.

The difficulty for many clients is of course deciding upon the best course of action or structure to use. But I am about to let you in on the secret… The purpose of this report is to demystify the Foundation, explain the concept in plain English, and explain the differences between a Foundation and a Trust of the Anglo-American variety.

Very little, is the simple reply, and although this article is only a general outline of the subject and is not intended to substitute for a detailed analysis of the Private Interest Foundation legislation created under Law Number 25 of 1995 in Panama, it will give the reader a broad picture which will provide an overall view of this useful addition to Panama’s slate of offshore financial services products.

The definition of the Panamanian foundation can be elusive and it has been viewed as an incorporated company without participating members but still having limited liability. It can be argued also that it acts like a trust but operates like a company because it is, in essence, a company with beneficiaries instead of shareholders.

The foundation can be created by one or more individuals and it can also be formed by a company or other legal entity. Although the foundation must have a name, it is not necessary for the party or parties creating it to be recorded in the foundation charter as the founder or founders because a nominee can be used.

In this way complete confidentiality can be achieved. The confidentiality provisions of the local law require both professionals and public servants not to divulge information to unauthorised third parties, except that disclosure will be sanctioned in the case of defined crimes. Unauthorised disclosure can result in a fine and imprisonment.

Foundations in Europe have been used for over 100 years and it is fair to say that the law governing Panamanian foundations is based on Liechtenstein law so the nature of the Panamanian foundation is understood and appreciated by many Europeans. Foundations in Panama, as in Europe, are ideal succession tools, and they can either be inter vivos (active during the client’s lifetime) or testamentary (upon death) but they may not engage in general commercial activities, unlike a trust.

They are also appreciably cheaper to maintain than the European variety and if commercial activities are contemplated, a company owned by the foundation can be utilised.

Although the Panamanian foundation cannot be established for purposes of commercial profit, it can own assets (such as active companies) which do generate profits. It is best to regard it both as a receptacle for the assets of the offshore structure and the means by which beneficial ownership of those assets is determined.

The foundation can serve as a substitute for a will which avoids probate and can effectively isolate a portion of one’s estate dictating the management and succession of specific assets.

Just to confirm… We have just uploaded the latest version of our Panamanian Foundations Demystified Report to the members’ area of our website.