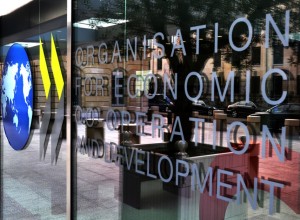 Inspired to crack down on tax dodges such as the Double Irish and the Dutch Sandwich, the Organisation for Economic Co-operation and Development (OECD) says its “base erosion and profit shifting” project provides governments with “international solutions to address the gaps and mismatches in existing rules which allow corporate profits to ‘’disappear’’ or shift to low/no-tax locations, where no real value creation takes place.”

In other words, with QE and other measures failing to staunch the flow of increasing debt, more taxes will be squeezed from entrepreneurs to feed those who sponge from the system…the bureaucrats and civil servants.

Activities targeted by the OECD measures include loading up subsidiaries with related party debt and channelling sales revenues to low-tax jurisdictions. Multinationals such as Google and Apple have been strongly criticised for using the latter technique.

The planned moves are said to herald the biggest change to the international tax rule book since it was put in place before World War II.

Corporate practices on debt deductions are a particularly significant change.

Other areas of focus will involve the definition of “permanent establishment,” which affects the ability to divert sales overseas, as Google and Apple have done, and country-by-country reporting of profits and taxes.

We’ll keep you posted on the outcome of tomorrow’s announcement. In the meantime, if you have not already started internationalising your banking, now is a good time to start. Our Practical International Banking Guide gives you names and contact details of reputable banks all over the world. Free as part of the Q Wealth Membership, it is also available to download here: