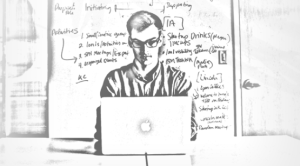 Our usual Q bytes writer is unfortunately unwell right now, and has asked me to step in.

So if Q bytes seems a little different this week, then at least you know who to blame!

I thought this week then, that we’d combine Q bytes, with my usual “That Was The Week That Was” feature, where we try to ‘read between the lines’ of a story or two from around the world.

A few days ago, senior Telegraph reporter, Ambrose Evans-Pritchard, wrote an article about what was, without exaggeration, the “suspension of Democracy” in Portugal …

Here are some of his words.

For the first time since the creation of Europe’s Monetary Union, a member state has taken the explicit step of forbidding Euro-sceptic parties from taking office, on the grounds of national interest.

Anibal Cavaco Silva, Portugal’s Constitutional President, has refused to appoint a Left-wing coalition government, even though it secured an absolute majority in the Portuguese parliament, and won a mandate to smash the austerity regime, bequeathed by the EU-IMF Troika.

He deemed it “too risky”, to let the Left Bloc, or the Communists, come close to power, insisting that Conservatives should soldier on “as a minority”, in order to satisfy Brussels, and appease foreign financial markets.

Democracy must take second place, to the higher imperative of Euro rules and membership!

“In 40 years of Democracy, no government in Portugal has ever depended on the support of anti-European forces, that is to say,forces that campaigned to abrogate “The Lisbon Treaty”,

“The Fiscal Compact”, “The Growth and Stability Pact”, as well as to dismantle Monetary Union, and take Portugal out of the Euro, in addition to wanting the dissolution of NATO”

Now they say that there is nothing quite so permanent, as a temporary government decision!

And when it comes to a hideous, unelected supra-national institution like the European Union, you can bet it’s even worse than that!

But did you notice the specific reason given, for the supposedly temporary suspension of Democracy in Portugal?

It was in order to …

Of course using sly euphemisms like “Brussels” and “financial markets” is simply verbal sleight of hand and code, for “satisfying” and “appeasing” Central Banking controllers.

Interestingly, Evans-Pritchard did mention the Troika, but, he only included two of its component parts, the EU and the IMF, omitting entirely to mention the real driving force, the European Central Bank.

After all, in the end it was the demands, deadlines and diktats of the European Central Bank, that steam-rollered the Greek people into believing that they had no choice but to go further into debt to “foreign financial markets”.

And now, with this tyrannical decision to arbitrarily invalidate the entire Portuguese election, it seems that the Banking controllers are not going to risk a repeat of the Greek debacle, and so Democracy is simply being sidelined!

There is to be no spotlight shone once more, on to the festering core of the EU’s problem … Bank Usury!

Instead, we’re to be subjected to the sight of the unelected, de facto Politburo of the EU (a.k.a. Brussels!) trampling all over the illusory “rights” that, quite clearly, the People never actually ever had in the first place!

Now didn’t they tell us the yarn, that our grandfathers fought and died to defend this “mirage of rights”, and hasn’t the West been “exporting democracy” to the Middle East and beyond for decades?

By trundling out their secret weapon … the purportedly only “rubber stamping”, ceremonial and constitutional Portuguese President … the EU/IMF/ECB Politburo has taken a calculated risk, because surely people will now question what really lies behind such draconian measures.

Or maybe they won’t!

It seems that so many have simply become too worn down by the relentless, Terminator-like “mission creep” of the Troika, to offer up much resistence.

But, regardless of that, the Portuguese people that need to wake up and smell the port, because right now, there’s something rotten, not just in the Kingdom of Denmark, but in Portugal too.

What has become abundantly clear from this paradigm-shifting act of tyranny then, is that the Troika has now been forced into “crossing the Rubicon” in their mind games with the European people, and their short-lived flirtation with even a fake form of Democracy, is effectively over.

Those ‘behind the scenes’, who direct these unelected EU leaders, have now made it clear that when overt tyranny suits their purposes better than covert tyranny, that they will absolutely not hesitate to use it.

Even tyranny now it seems, has has become “too big to jail”.

Whether it be the “Left Wing” administrations in Greece and Portugal, or a potentially “Right Wing” Le Pen party surge in France (which is entirely possible should the EU’s current stealth immigration plan continue) then Democracy is bound to, yet again, play “second fiddle” to the “Banking fiddle”.

Henry Ford once famously said to his customers, regarding his Model T Ford cars …

“You can have any color you like … as long as its black”!

Well it seems that the People of Europe too now, can have any color of political representation they like, so long as it retains a Central Bank-controlled, faux-debt-based form of economic slavery.

Of course neither fake “choice” is worth Jack … nor are they in any way viable or sustainable.

Both only perpetuate a deliberately ill-defined problem, one that can only ever truly be fixed, when a fair and just monetary system, free from usury and Banking obfuscation, is implemented.

Talking about that subject, as you know, I do tend to bang that “debt drum” quite often, essentially because “the third way” solution that that drum beat represents, is just SO ridiculously suppressed and overlooked, by even the so-called alternative media, never mind the sickeningly “lame stream media”.

So for any who are interested in finding out more about how that holy grail “third way” could be implemented, please watch the following video.

The video leads to an entirely non-commercial series of videos that were created by a very dear friend of mine, Mike Montagne, of “Mathematically Perfected Economy”.

The series is called “MATHEMATICALLY PERFECTED ECONOMY vs USURY”.

The videos do an excellent, if not unique job, of explaining the basics of exactly how we have been so viciously and deliberately misled and deceived, by the current Central Banking system.

And as you will soon see, the real monetary debate is less about what money might be “backed” by, and more about who the entire “money creation” process actually belongs to!

Hint: It isn’t Banks … and it’s not governments either!

The good news is, that Mike Montagne has agreed to do an Q&A style webinar interview, exclusively for Q Wealth and Q Bytes members.

So if any do have questions after reading Mike’s critical solution, then please feel free to send him any questions you might have.

No firm date for the webinar has been set yet, but you will be the first to know!

Watch this space … because the material he presents, genuinely represents a brand new paradigm in the very definition and structure of money.

Anyway, I hope you enjoyed a glimpse into a couple of what were actually quite complementary stories in the end!

Take care of yourselves, as always