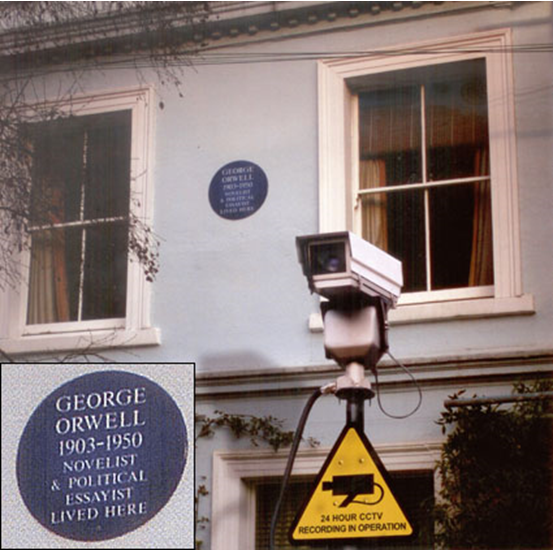 The above picture isn’t real.

And no … as deliciously ironic as it would be … there isn’t a snoop camera, lurking outside George Orwell’s old window.

The image has been proven to be ‘photoshopped’.

But … in defense of whoever created the image, the reality on the ground is actually very little different to that mock up, and what the satirical image does so well, is it shockingly highlight an issue that is not only rapidly getting worse, but more worryingly, is now widely accepted by a whole new generation, as being “normal”.

And in a Facebook-dominated world, where suddenly, NOT “liking” or “sharing” something, is often considered to be rude, then appreciation of just what privacy even means any more, is rapidly diminishing.

Astonishingly, for a country that makes up less than 1% of the world’s population, Orwell’s former home, the United Kingdom, is “blessed” with more than 20% of the world’s CCTV cameras!

But don’t feel left out if you’re from elsewhere, because others countries are catching up fast, as Orwell’s dystopian masterpiece/nightmare/prophecy, finds itself now being surpassed by reality. 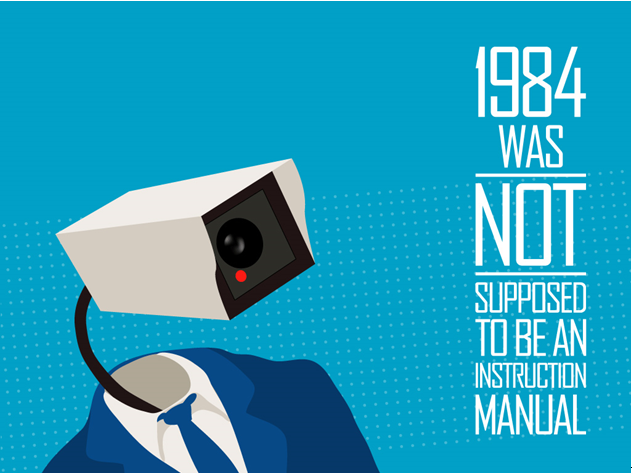 SUBSCRIPT : “1984 was not supposed to be an instruction manual”

The building shown in the image at the top of the page, where Eric Blair (a.k.a. George Orwell) lived, in the 1940’s, still stands today, and is situated in Cannonbury Square, London.

And while we now know for sure that there isn’t a camera right outside, the map below does show the location and distribution of just some of the public CCTV cameras that are close by. 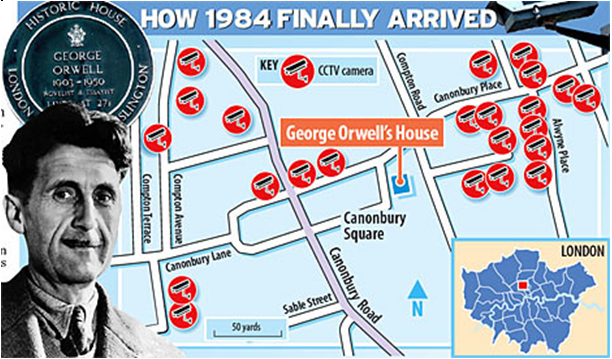 All told, there are over 30 State-run CCTV cameras within just 200 metres of Orwell’s former home, along with what must surely be hundreds more, private cameras, monitoring people from shops and other commercial premises and businesses.

But ironically, the Big Brother-style “all seeing eye” cameras that Orwell warned about, were perhaps the least dangerous aspect of the fictional society he foresaw.

He saved many of his most dire warnings though, in describing something altogether more insidious and dangerous.

That danger, was quite simply the indoctrinated frame of mind that the INGSOC Party had managed to instil into the minds of the people. It was a soporific form, of ultimately self-regulating, State-sponsored mind-control, that manifested itself in the people’s reluctance to even think about questioning “the party line”.

“Loyalty”,“patriotic duty”, and “defending our freedoms” became everything; mantras not unfamiliar today, that can be heard tripping from the tongues of millions.

Precariously though, this unwillingness to criticise, or even see, the root of the problem, was all that kept their abusive rule in place,

And so encouragingly, and partly because of what Orwell wrote, we are at least somewhat forewarned.

Similar to us today, the inhabitants of Orwell’s fictional world were deceptively indoctrinated into believing such blatant lies as …

“War is peace, Freedom is Slavery, and Ignorance is Strength”. 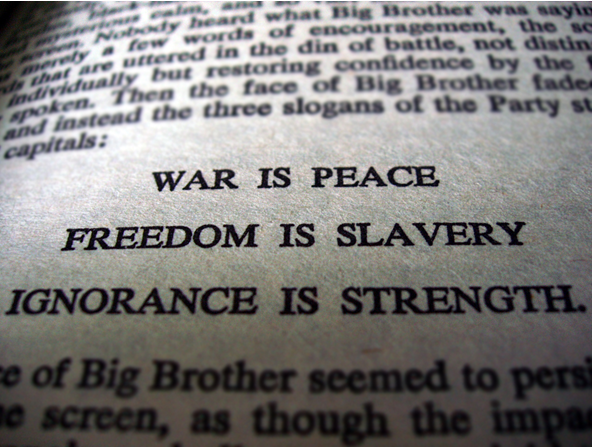 The acceptance of such blatant absurdities of course, was only possible as a direct result of that same mind control processes, dubbed by Orwell as “doublethink” and “blackwhite”.

The current, fabricated, and seemingly endless “War on Terror”, accurately mirrors that same “state of fear” that Orwell described, but it is only the most obvious example of the current, “War is Peace, Freedom is Slavery” doublethink propaganda, that we too are forced to put up with via 24-hour, around the clock news indoctrination. 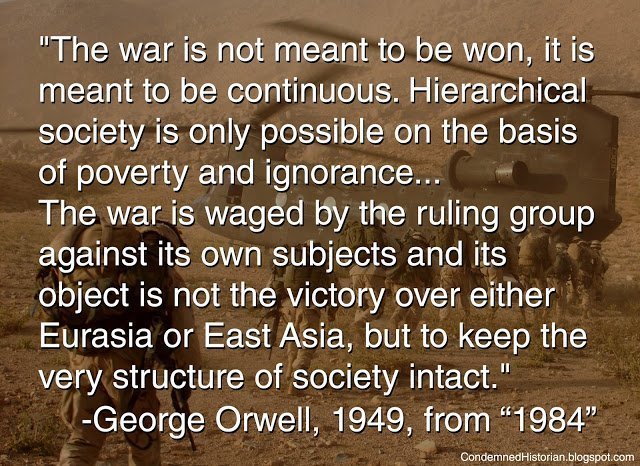 Critically though, just like the rulers of Oceania, the manipulators of our world too, know that they can only maintain their tyranny by keeping the majority of the population in a permanent, and debilitating state of manufactured, but ultimately artificial, fear.

Even a short time spent watching the controlled mainstream media “News” channels, and observing how they impossibly parrot each other, with near identical interpretations of complex events, is enough to convince anyone, that we too, are being ruthlessly conditioned to accept false realities. 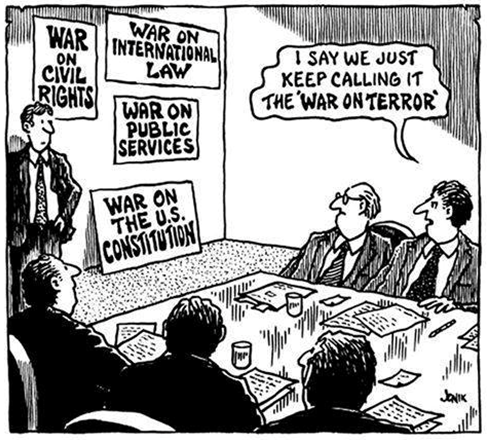 During the recent World Economic Forum held in January, 2015 in Davos, Switzerland, the CEO of the much criticized Google corporation, Eric Schmidt, delivered a speech, outlining Google’s vision for the future.

In it, he predicted what he described as a move away from an “external internet”, cryptically adding that … “the Internet will disappear”.

Of course the Internet isn’t going to “disappear”. What he was alluding to, was that he knows what the plans are, in that soon, we will soon be interacting with the Internet in a wholly different way; one that does not involve traditional external devices.

Head of Engineering at Google, Scott Huffman, has also recently chipped in on the conversation.

He is on record as saying …

“If you think hard enough about certain words, they can be picked up by sensors, fairly easily. It’ll be interesting to see how that develops.”

The kind of sensors that he is talking about, can only be sensors or chips, that are attached directly to the brain.

The bottom line is that Google knows that the technology already exists, to enable direct communication between information networks, and our brains.

Now this not just some wacky bit of wishful thinking, or some far our piece of science fiction. Research using such chips is already well under way, with the ostensible aim, as Hoffman recently put it, of “helping disabled people to steer their wheelchairs for instance”. 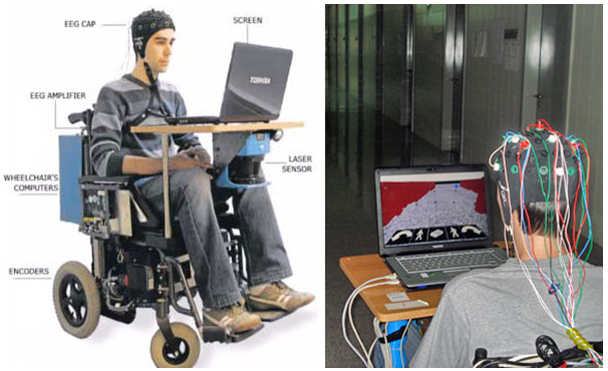 Of course, these sort of “advancements” will always need to be cloaked in talk of “convenience”, or in “helping the disadvantaged”. But that sort of language is always simply a “feel good”, Trojan Horse, a pretext, not to mention precursor, for later “full scale roll outs” to the masses.

When pressed on the obvious moral and security concerns, posed by such ‘transhumanist’ technology, especially given that Google is self-admittedly, “vulnerable” to being hacked into, Google’s CEO Eric Schmitt dismissively said …

“If you have something that you don’t want anyone to know, then maybe you shouldn’t be doing it in the first place.”

How that comment contrasts with other statements that Google (whose motto is “Do No Evil”) has made in the past.
Like this one.

“We are outraged, at the lengths to which the government seems to have gone, to intercept data from our private fiber networks, and it underscores the need for urgent reform.”

But despite such “for public consumption” statements, purely designed to mollify and pacify the public, that something is being done about privacy, there is undoubtedly, a relentless march towards “total information exchange” between the public and increasingly centralised agencies, and “total information privacy”, for governments themselves.
One look at what happens to high profile whistle blowers, like Julian Assange, Bradley Manning, and Edward Snowden, tells us all we need to know about how that one-sided “deal” is going.
So there may be no camera, lurking outside Orwell’s house, but we face infinitely more sinister methods of tracking, and even fabricating, our very thoughts themselves in the future.
We may well need to be, not just vigilant, we may at some point need to actively “push back”, against the worst excesses of Orwell’s dystopian vision.

P.S. Again, as always, Q Wealth Report is here for you, to help stem the tide, and preserve and strengthen your privacy.
And with that in mind, I would refer you to the recent excellent Articles from SecureLaptop.org, written recently in this blog.   Also watch out for the very informative new laptop / pc security report that is being released and uploaded in the next few weeks.

3 thoughts on “What lies beyond “Big Brother Is Watching You” ?”