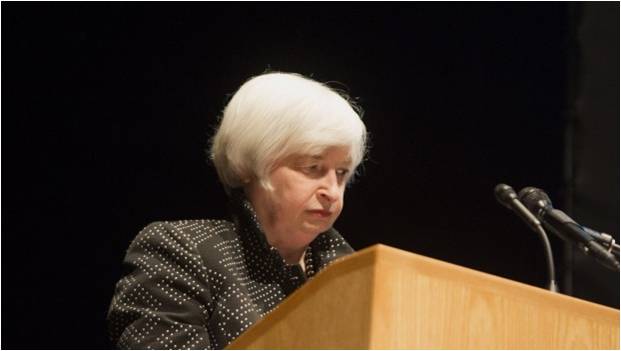 A few moments ago, the Reuters News Agency released a post, that carried the following headline …

Fed’s Yellen gets medical attention, after struggling with speech


“Federal Reserve Chair Janet Yellen received medical attention on Thursday, after coughing, pausing and struggling to finish a speech, in which she said the U.S. central bank was on track to raise interest rates this year for the first time in nearly a decade.”

With the markets poised at such a precarious state, and with the FED finding themselves unable, yet again, to raise rates even by 25 basis points, health concerns about Yellen herself, is the last thing that the FED’s already trashed credibility needs.

Following on from three straight days of losses for U.S. Stocks this week, the Federal Reserve’s Janet Yellen came out on Thursday, with the intention of “reassuring the markets”.

And while her speech does seem to have resulted in a small spike in the Dow Futures in Friday’s pre-open, it was her floundering, flailing performance during an error-strewn speech, littered with what were described as “scary” pregnant pauses, that drew much of the attention.

Seeming to almost choke on her words, Yellen visibly struggled to deliver what should have been the rousing, reassuring and confidence-inspiring conclusion to her speech.

Yellen received medical attention afterwards, oxygen was seen by observers, and the incident was finally and officially put down to “dehydration”.

Given what seems to have been her speedy “recovery”, many who saw the speech, have been left wondering if she wasn’t simply struggling to deliver such nosensical claims, such was the sheer number of increasingly un-likely, un-believable, and in-credible forecasts that she was making.

Below then, is a video clip of the conclusion of her speech, and so perhaps we ought to let readers judge for themselves whether Yellen was simply unwell, or whether she was just “choking” on her increasingly difficult to deliver “words”.

1 thought on “Just How Well, Is Janet Yellen?”