Walking around Aviadores del Chaco, the new financial heart of Asuncion, reminds me of Panama City eight or ten years ago – just a few degrees cooler and with less humidity. Almost every block the pedestrian has to take his life in his hands to circumnavigate huge trucks pumping concrete into new skyscrapers.

Paraguayans in this part of town prefer to travel in late model SUVs so these blocked pavements don’t bother them too much – but I believe in literally putting into practice the expression “boots on the ground” and like to walk around to get a feel for the place.

And the feel here has changed – even since I was last here, on this same street, only six months ago.

There are big changes going on in Asuncion.

Apparently, a number of developers from Panama, where the real estate bubble has burst, have set their sights on Paraguay… now served by a direct daily Copa Airlines flight. And the word on the street in Panama City is that Asuncion is their new competitor.

Trust me, I didn’t invent this!

From the window of my room in the hotel where our event has just finished, I see the rising towers of the new Asuncion World

Trade Centre. A new Hilton is also under construction, just steps from the Sheraton and the Ibis. These construction sites are surrounded by numerous residential projects, including one where the developers are investing over $160 million in the one project.

This, to put it mildly, is a surprise.

I knew five years ago that investing in urban real estate in Paraguay was a good deal, but I didn’t expect things to unfold in quite this way.

Paraguayans joke that because they are descended from Indians they like to live in the countryside, with lots of space, and Asuncion is still a very green city (like Panama in the 1970s) However, I can see more and more 6 to 10 floor condominium buildings going up in neighborhoods where traditionally buildings are one or two storeys and it is not unusual to find single-family houses occupying a whole block.

For most English speakers, Paraguay is an off-the-radar country.

If we think of it, we associate it more with agricultural investment opportunities. Those agricultural opportunities still exist – big time – and indeed, this was one of the main reasons for our meetings over the past few days.  However, on this trip, I really noticed that Paraguay has acquired ‘safe haven status.’ Brazil is a bubble that will burst any minute after the World Cup, and Brazilians know it.

Argentinians, quite reasonably, don’t trust their government an inch. Uruguay, their traditional haven, has signed some rather unpleasant tax information exchange treaties recently. Paraguay, on the other hand, is booming and offers a secure and stable home for their dollars.

It’s not just the neighboring countries that are taking note, though. The single biggest source of foreign direct investment in Paraguay last year was Mexico. One of the new skyscraper projects is funded by Guatemalan capital. At lunch today I sat next to two businessmen from Barcelona who are investing in real estate here. Russians are moving in too, since they can now travel visa-free to Paraguay. (Russia is also now the biggest export market for Paraguayan meat.)

Basically, all of these investors are people who feel their hard earned money is not safe in their home countries. But Paraguay offers stability and safety. That is why I say Paraguay has achieved ‘safe haven’ status. And this is where the comparison to Panama is valid.

The economic conditions are right. 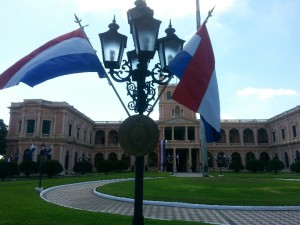 The Paraguayan government, while bureaucratic, does not over-regulate. There is a flat tax of 10%, payable only on income earned on Paraguayan territory.

The Paraguayan tax collectors have no interest in offshore income of local residents and don’t ask questions. There are numerous incentives to encourage foreign businesses to come in, sector by sector, and you don’t have to be a multi-millionaire to take advantage of them.

Despite all this, Paraguay is not a tax haven under the traditional definition, and never has been. It does not have the same stigma that some attach to Panama.

Paraguay is still affordable, though living costs are rising.

Is it a good time to buy real estate in Asuncion?

It could be, if you are aiming for a fast turnaround. This development is in a new phase – as I said, it wasn’t like this only six months ago.

But I would have to hang around here longer to give you a definite answer on this one.

One other thing we have seen ample practical evidence of on this trip is that the residency and citizenship process here in Paraguay is also tightening up. It’s still the easiest and cheapest in the region – the benefits and the process are fully described in our Q Wealth Second Passport Report.

This tightening of the screws is partly because as Paraguay becomes wealthier, it can choose to be more picky. Unfortunately, it’s also due to a number of second passport scams, that the immigration authorities have become aware of.

Our attorney who hosted the meetings showed me two emails that had arrived just in the past week from people who had been offered “instant citizenship” in Paraguay.

Yet it’s very clear that there is no instant second passport program in Paraguay and anybody who claims otherwise is acting illegally!

The conclusion of this trip?

Paraguay continues to be one of the most interesting countries in South America, both for investors and for those seeking a new tax-haven residence. I do believe that this recent inflow of capital is only the beginning of a much bigger wave. Paraguay is one to watch and we will be watching.

A more in-depth article on investment opportunities in Paraguay will appear in next issue of The Q Wealth Report, set to be published in our Members Area within the next few weeks.

8 thoughts on “Is Paraguay the Next Panama?”