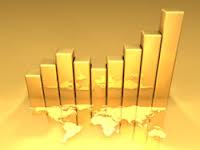 But we are not so sure as Bloomberg that US growth is really quickening. The Federal Reserve has printed trillions to liquefy banks and other financial entities, but little of this has found its way into the “real” economy. Instead, this money has boosted stocks around the world, and especially in the US.
Meanwhile gold has traveled down, though much of the downdraft can be attributed to “paper gold” rather than physical gold that people take possession of. Paper gold is much more apt to be manipulated and the price is set in London via estimates rather than the market.
Thus, gold prices are not perhaps any more trustworthy than stock market signals. Those who claim that markets are signaling a US recovery may be mistaking monetary stimulation for economic growth.
Nonetheless, Bloomberg tells us hedge funds in particular are once again cutting gold forecasts – and that goes for physical delivery as well as mining stocks, ETFs, etc.  And of course silver is in the same boat.
Hedge funds lowered bullish gold bets for the first time in five weeks as signs of accelerating U.S. growth contributed to the longest retreat in prices in a month.
Money managers cut their net-long position by 6.5 percent to 65,517 futures and options by July 30, U.S. Commodity Futures Trading Commission data show. Holdings of short contracts rose 6.8 percent, the biggest increase in six weeks. Net-bullish bets across 18 U.S.-traded commodities contracted 15 percent as investors cut wagers on higher crude prices for the first time in a month and more than doubled bearish bets on copper.
Gold futures declined 0.9 percent last week, the first drop since the week ended July 5. Prices capped a four-day losing streak on Aug. 2, the longest since June 27.
… The U.S. economy grew at a faster pace than previously forecast in the second quarter, the Commerce Department said July 31. Manufacturing expanded in July at the fastest pace in more than two years, and the unemployment rate dropped to the lowest since December 2008, government reports showed last week. Gold tumbled 22 percent this year as U.S. expansion prompted speculation the Federal Reserve taper stimulus.
“The economy is healing, and if the economy is healing then it doesn’t require the assistance of the Fed,” said John Stephenson, who helps oversee about C$2.7 billion ($2.6 billion) at First Asset Investment Management Inc. in Toronto. “Whether tapering happens tomorrow or next year, it’s coming, and the market knows it.”
One of the funds managers that has suffered the most from gold’s decline is John Paulson, who has been seeing steady losses to his flagship funds. Meanwhile, Bloomberg claims that 100 or more economist estimates see the US economy headed upwards over the next year.
Some who are metals-oriented are willing to fight the current trend however, including Greenlight Capital Re Ltd., a reinsurer whose manager David Einhorn, sold “a small amount” of bullion to buy shares of gold-mining stocks. Einhorn has claimed that the miners were in “free fall.” Indeed, according to Bloomberg, the Philadelphia Stock Exchange Gold & Silver Index of 30 mining companies “plunged 34 percent in the three months ended June 30.”
Einhorn may be right about gold mining stocks given that the current Golden Bull has not completed its cycle. In the 1970s as in the 1930s, gold mining stocks ultimately appreciated considerably despite economic difficulties. In the current era, physical gold and silver have appreciated a great deal but mining stocks have not participated.
But this may not be telling us that the economic cycle has shifted back to stocks and economic renewal. The current scenario may simply be one where the larger business cycle itself has not run its course. If this is the case, then the miners are still due for a considerable upwards move and stocks – and the US economy in particular – may not hold its gains.

It may be a long time before gold mining bets pay off, but those who are students of business cycle history, especially in the US, may wish to buy now to participate in a powerful mining recovery that investment history would indicate is still to come.

Others, of course, scoff at such notions and confidently await a resurgent US economy and an additional 20-year moderation in gold prices.
These are the scenarios that many are considering and a goodly amount of wealth hangs in the balance.

Articles provided to Q Wealth are original compositions not to be found elsewhere. He welcomes your comments at [email protected] or below.

1 thought on “Is It Time to Buy the Gold Miners?”