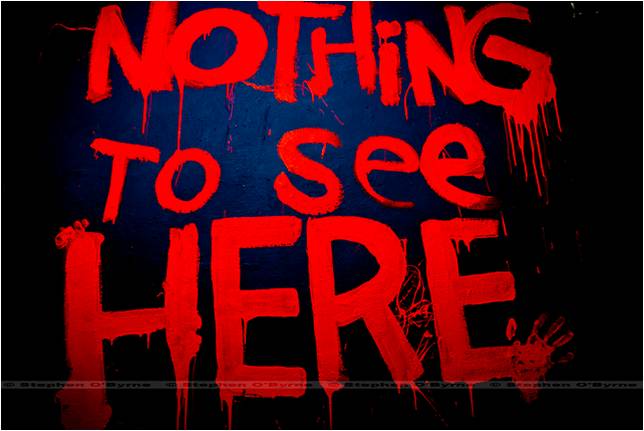 “Move Along … Nothing To See Here” Is China Being Unfairly Blamed? What Is The West Hiding?

The market tumbles that we’ve seen recently, have been pretty much universally blamed on … “China”.

Now while it is absolutely true, that China is undergoing its share of adaptation issues, which certainly haven’t helped the performance of Western stock markets, it’s equally true, that as far as the western financial system and their media poodles is concerned, China’s problems have actually come as something of a God send.

In that China’s woes have given western markets a chance to partake in a disguised decline; a decline that was vital, but that could use China’s troubles as an excuse to avoid drawing attention to some of their own deep-rooted systemic problems.

One such problem has been that since 2008, the Federal Reserve has been making credit available to its satellite banks, at ridiculously cheap rates …

… sometimes as cheap as around one-tenth of 1%!

In turn, those Too Big to Fail/Jail Banks, have then lent money out to brokers who have in turn lent money to the big institutional investors, traders, and speculators.

And what these guys have obviously been thinking, is that if they can borrow at say 1%, and leverage that money even further, and then use the result to buy stocks, stocks that can return 5% or 6% percent, then they can make money all day long.

And that’s exactly what they have been doing, which is why there has been such a huge disconnect between Wall Street and High Street.

But we all know that such highly-leveraged, debt-money-funded speculation, can only works while the markets are going up.

But once the “music stops”, and the stocks go into a correction phase (or heaven forbid, turn “bearish”!) then those Goose-with-the-Golden-Egg type income streams of theirs, go into lightening fast reverse gear!

At that point the cost of even servicing the debt, let alone paying it down, becomes crippling uneconomic, making the the entire exercise unprofitable, and forcing the holder of those derivative-based debt instruments to offload of the underlying Stock assets!

So while they’ve probably made a healthy profit through debt-fuelled purchases on the way up, they’re now haemorrhaging huge leveraged losses, unless they sell the underlying assets and close their positions.

As in the Sub-Prime Crisis, with its dizzying array of Collateral Debt Obligations and Credit Default Swaps, much of the very recent leveraged and derivative-“protected” asset purchases, have require accelerated selling of those underlying assets, as the sharp decline in share prices has kicked in.

This type of “trading” is short-term thinking, on a massive scale, but unfortunately, Central Banking policies have positively encouraged such insane short termism.

Some readers will remember the Long-Term Capital Market crash of the late 1990’s.

That was when two Nobel prize-winning economists, convinced the financial world that the whole economy could survive purely on “short term considerations”.

Well a lot of people found out to their great cost, that in the final analysis, all short-term considerations, no matter how many pairs of rose-tinted glasses they come adorned in, must bow to the long term view.

Now some commentators are amazed that today’s press “just don’t seem to get it” … and of course they have a point. But in saying that, perhaps they miss the point that the bought and paid for financial press, is hardly in the business of “exposing the hand that feeds it”!

But putting aside a discussion of the media cesspit for a while, it’s understandable why some slightly less partisan commentators, criticize say, Paul Krugman of the New York Times; a man who has made a career out of being a Central Banking apologist, advocating ever-increasing, debt-fuelled spending … essentially the economics of the mad house.

Thinking like his, essentially posits that the problem is that there is a savings glut, and to fix it, the Central Banks should print even more debt-based credit money.

Undoubtedly when the time comes, he will also welcome with open arms, the Trojan Horse of “Negative Interest Rates”, along with the end-game of a Cashless Society that hides away in its bowels.

Raging Big Government Statists like Krugman, never see people’s money as truly their own, but only see it only as a proxy asset of The State, there to be manipulated at their discretion, and always “for the Greater Good” of course (that fallacious notion that doesn’t exist, but that is nonetheless used as the cover-all excuse for all manner of State theft against the individual!)

Corporations themselves, the subject of so much Stock Market speculation of course, have not been slow to take advantage of this ocean of virtually free money, and are in may ways, just as guilty as the sharpest of speculators, in fuelling the current problem.

Well, companies like Amazon, Google, and especially Apple, saw the opportunity to take advantage of virtually free money, and borrowed funds in order to purchase their own stock from the market.

But far from merely using accrued profits to fund such “Share Buy Backs”, they sheltered their profits, and instead borrowed extremely cheap money in the form of bond issues and capital loans.

These companies knew full well, that such activity on their part would be lead to share price rises, without necessarily requiring the same historical levels of profit growth.

It was an almost irresistible temptation, especially as major increases in profit levels have become increasingly difficult to attain and retain.

So of course these companies all made a lot of money “in the short term” (where have we heard THAT before?!) on the way up, but if the markets falter, as they have begun to do, then their net worth is at huge risk, only further fuelling any potential slide in Stock Markets.

All of these issues then, help to illustrate that it is far too simplistic, not to mention unfair, to “blame China” for all the recent stock market corrections.

Many commentators of course do “blame China”, not least of whom, is presidential hopeful, Donald Trump, who has been extremely vocal and pointed …

“I’ve been talking about China for years.

Because China’s going bad, it’s going to bring us down too,

because we’re so heavily coupled with China.

I’m the one that says, you better start un-coupling from China,

because China’s got problems.”

Yes, I know, that quote is so riddled with issues, that it would take an entire special report to unravel it, but I include it, to illustrate the extent of the contorted blame-shifting that’s going on right now, in an attempt to divert attention away from West’s own systemic problems.

Perhaps though, even the Fed realise that they simply “have to do something”, but find themselves “caught between a rock and a hard place”, unable to either “Stick or Twist”!

Despite all of the Fed’s bluster and sabre rattling about “raising rates soon”, it now looks increasingly unlikely that they will be able to do so … But, that they may do so nonetheless, simply because to back track, after being so bullish, could in itself spark a serious lack of confidence in their ability to handle the economy.

I’d suggest that such lack of confidence in their ability to handle the economy, perhaps ought to have been recognised by Congress over 100 years ago, when they first treasonously allowed them to take over the monetary system.

“This Federal Reserve Act, establishes the most gigantic Trust on earth. When the President Wilson signs this Bill, the invisible government of the monetary power will be legalized … the worst legislative crime of the ages, is perpetrated by this Banking and Currency Bill … From now on, depressions will be scientifically created.”

“Most Americans have no real understanding of the operation of the International Money Lenders.

The accounts of the Federal Reserve System have never been audited.

It operates outside the control of Congress, and manipulates the credit of the United States”