Destination Uruguay:  Investing in real estate and quality of life.

At a time when the social, political and economic crisis has historically affected strong countries, and where uncertainty is the only certainty in most of the world, you could do worse than considering Uruguay, the small country sandwiched between the South American giants Argentina and Brazil. Prosperous in its tourism and investment activity, Uruguay currently works to consolidate as an investment destination.

Uruguay’s average annual growth of 6 percent from 2005 to 2013 surpassed that of Brazil, Colombia and Peru, South America’s heavyweights. Its GDP per capita is a remarkable US$ 16.905 with an investment grade debt rating currently at BBB-Baa3/BBB. The country has a stable political system and assures foreign investors with the independence of the judiciary, therefore guaranteeing legal certainty.

It isn’t only the economic indicators that are catching investors’ attention!

In the most recent annual Democracy Index – assembled by the Economist Intelligence Unit, a research firm with ties to The Economist magazine – Uruguay was the only South American country in the “Full Democracy” category. Its overall 17th rank was even ahead of the United States, at 19, and the United Kingdom, at 18.

Uruguay surpassed the United States in the index in civil liberties, functioning of government, and electoral process and pluralism. In a separate ranking, Reporters Without Borders, a journalism advocacy group, ranked Uruguay 27th in press freedom; it placed the United States 47th.

Uruguay ranked highly for its innovation, its high living standards and for being a great platform for business. The country has achieved a great position in indexes that measure transparency and political stability. It went from being number 33 in the Global Peace Index to being 24th, an accomplishment that positioned Uruguay as the most peaceful country in Latin America, whereas Transparency International ranks the country as the least corrupt on the continent and 19th worldwide.

Praised in the past as the “Switzerland of the Americas”, Uruguay, the once best kept secret in Latin America, is now a popular tourist destination. Its attractive cities, excellent infrastructure, beautiful and laidback beaches plus the country’s overall affordability are enticing many suitors. Ideal also because of reversed seasons with summer temperature of 24-29C (75-85F) between December and March. Cash rich baby boomers from Europe, the US and Canada are beginning to cast lustful eyes towards this small South American country.

Uruguay has become especially popular with early retirees and those who work independently or online thanks to fast and reliable fibre optic cables that connect Uruguay with the world, a virtual meeting point for expatriates and travelers alike. The Economist recently labelled Uruguay as the country of the year, whereas the New York Times urged its readers to make Uruguayan beach resorts a top destination for 2014.


High on the list of things that make Uruguay a desirable place to relocate are its low crime rate, a transparent legal system, and a strong respect for private property.

It’s also relatively easy to establish residency after which citizenship is available within a time frame of five years, depending on your situation. Furthermore, the financial infrastructure of the country is reliable with a sound banking system. Many foreign banks having a presence and branch network in Uruguay. Funds brought into the country don’t even have to be converted into the local currency as all property transactions are done in Dollars or Euros. Additionally, there are no waiting periods to take out any capital gains you make, or withholding taxes.

What sets Uruguay real estate opportunities apart from many other offshore locations is that foreigners can buy and sell real estate in Uruguay with the same rights and protections as Uruguayans. The government of Uruguay encourages foreign investment, the real estate registration system is solid, and property rights are actively enforced.


While many countries saw its property prices tumble during the last financial crisis in 2008, Uruguay’s property market has remained remarkably stable. The country has not seen a slump, partly because Uruguay has a very small mortgage-backed-lending market, so the country did not experience an asset bubble. 90 % of property transactions are done with ready cash in the bank. It also helps the market that there is a decent trickle of foreign buyers, despite the recent dearth of traditional Argentine clients. Steady growth in the local property market, also offsets any discernible fluctuation in the foreign market. 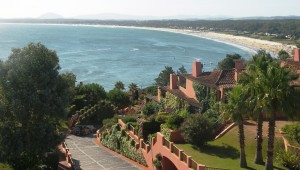 business district, or the up market sections of the capital like Buceo, Pocitos, Carrasco. Needless to say, most property investors aim for the well known beach resorts/lakes that stretch from Laguna del Sauce, Punta del Este, La Barra, Manantiales to Jose Ignacio and beyond to the department of Rocha where there are still plenty of untouched oceanfront plots land for sale at reasonable prices.

Punta del Este, traditionally known as the ‘Pearl of the Atlantic’ is one of South America’s premier seaside resorts. Its beautiful pristine beaches, dazzling casinos, jazz and pop concerts, fashion shows, world-class restaurants and upscale shops have kept international celebrities, European royalty and jetsetters coming for almost a century, earning it the title of the Saint Tropez/Sylt of South America.

Yet, Punta also very much appeals to families with children being offered a choice international schools and facilities, it attracts the health conscious who appreciate hormone free meat and organic produce and the sports crazy are kept busy with competitions such as sailing, tennis, polo or the marathon. The great attraction of this city is the broad range of choices for visitors and residents alike. From simple inns or B&B’s to deluxe international hotel chains; local family-style dining to gourmet international cuisine; tango shows, night long discoing or shopping malls, there is always something to do in Punta del Este, day or night.

Historically, the ownership makeup of Punta del Este used to be 80% Argentine, with the remainder shared among wealthy Uruguayans and other Latin Americans. This has shifted in the last few years, as investors from abroad want a share of the Uruguayan investment pie. For the last 10 years, many North Americans and Europeans have been discovering this exceptional property market with its beachfront and ocean-view real estate values and many relatively young Californians, Italian, French, and German retirees acquiring a 2nd residence here.

Even Mexican, Chilean, and Central American tourists are discovering Punta and are investing here. What’s more, wealthy Brazilians being appreciative of the excellent personal security in Uruguay, have been investing here steadily and now dominate several neighborhoods. Investors from everywhere also increasingly appreciate Uruguay’s vast open spaces with more agricultural land per person than any other country in the world. New agro tourism projects now abound in regions also known as the ‘Tuscany of the South’. Small farms, vineyards, olive plantations, citrus orchards, and cattle ranches are being snapped up by gentlemen farmers and investment funds alike. 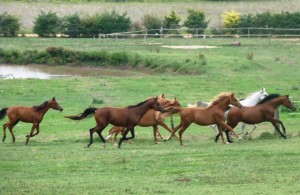 Overall Uruguay is a safe place for international property investors. Uruguay values and respects its competitive advantage and is a country with clear, predictable rules. Still, buyers should assume nothing. For example, if buying a condo in Punta del Este, you may want to verify the condo fees and whether the building has a heating system designed for year-round living – if you are looking for a home, not just a vacation home. Finding a reliable individual who will manage your estate during your absence is also recommended. It is best to engage with a real estate professional well versed in the cultural aspects and language of the particular client.

Looking ahead.  Is it time to invest in Uruguay?

Uruguay has some positive trends going for it with a growth forecast of 3,2 % for 2014. In the still difficult international economic environment, most realtors in Uruguay foresee steady, non-speculative growth. In areas such as Montevideo’s coastline and the Old City, demand will be stable. In resort areas – Punta del Este, la Barra and Jose Ignacio and Rocha – there will be continued growth, albeit at a steady pace. Farmland, after having reached a peak in prices in mid 2008, has adjusted and continues at a slower but steady growth with renewed pick up in demand. 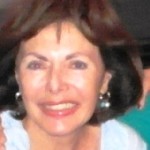 Margret Holzer de Baez is the CEO of Uruguay Property Partnership, with a background in TV, diplomacy and consultancy for executive relocation of multi nationals. Her well known and respected company, Uruguay Property, offers multi-lingual, tailor made property solutions to individuals and corporations.