By Mark Wallace of CapitalistExploits.at

Will There be a Parabolic Rise in Gold Equities..?

This is the question on the mind of many a gold share “bug.” I can say with relative certainty that the answer is YES. Why? I think the reason should be fairly obvious. Everything moves in cycles.

As we’ve discussed ad nausea in our newsletter, gold has had a dismal few years.

In 2011 gold hit a high of around $1,900 USD per ounce, fueled by easy money and fears of a currency debasement. Money printing continues to this day, but the dollar is alive and well. As of December 2013 gold sat below $1,200 USD per ounce. Silver fared worse yet, declining from almost $50 USD per ounce, to under $20 USD per ounce.

When we look at the gold mining equities it’s really ugly. The NYSE Arca Gold Miners Index lost about 70% of its value in that time frame. Many junior companies lost 90% plus, and some just blew away like so much pixie dust in the wind.

Chris (the other half of Capitalist Exploits) and I were casualties of this decimation ourselves. Most of our junior stocks, and almost all of our recommendations related to anything gold/silver were just taken out back and shot.

In general though 2013 was a bit of an anomaly, in that gold declined while the broader equity indexes rose substantially. Over the past 13 years prior, gold had outperformed equities. With the decline in gold it’s no surprise that gold stocks got clobbered so badly, as the fundamentals were awful.

Bellwethers like Goldcorp and Barrick Gold had massive losses and reduced reserves in anticipation of lower gold prices. In the last quarter of 2013 Goldcorp lost a whopping $1 billion USD, while Barrick claimed a $2.83 billion USD loss. These “big guys” were forecasting gold could be as low as $1,100 going forward.

As they so often are, the “big guys” were wrong. Gold has risen to $1,335 USD per ounce as I write this, and the stocks of the senior miners have risen over 25% on average. The old axiom, “Buy when there’s blood in the streets” seems to have held once again. The time to buy a stock, whether its a resource stock or otherwise, is when they begin rising on negative news. This is precisely what has happened with the miners. 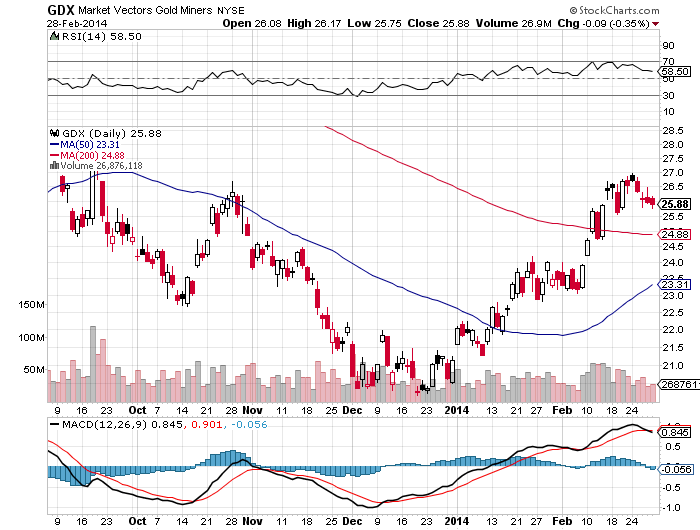 Our very own Brad Thomas put out a Trade Alert to subscribers on Barrick saying the following: 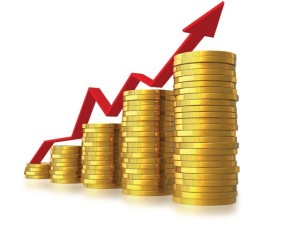 “I continue to hold the view that there will be an ultimate price to pay for all of the unprecedented monetary “stimulus” and money printing that we have observed over the last 5 years across most developed markets. This ultimate cost will be inflation, with a resulting dramatic rise in precious metals.

If ever there was a time to invest in gold stocks now is probably the best time due to a number of factors:  (learn more about how to invest in these and other stocks here)

Why ABX specifically? In essence while the price of gold has continued to fall over the last 8 months, Barrick’s share price hasn’t, which suggests that Barrick’s stock price has probably found a long-term bottom.”

Taking a look at the weekly chart of ABX, that price level being achieved within the next 2 years looks to be a good bet!

The moral of this story is that the bear market in the precious metals and the associated equities may be coming to an end. The bad news has been delivered, and now we are seeing prices rise. This is likely a new trend forming, with the classic higher lows patterns developing in the individual equities.

Institutional and retail investors are starting to take notice. Reuters reported on February 27th that,“The world’s largest gold-backed exchange-traded fund, New York’s SPDR Gold Shares, is on track for its first monthly inflow of metal in more than a year after a run of weaker U.S. data boosted investment interest in gold. The SPDR fund added 10.5 tonnes to its reserves so far this month. That means that, barring a large outflow on Friday, February would be the first month to show an increase since December 2012.” 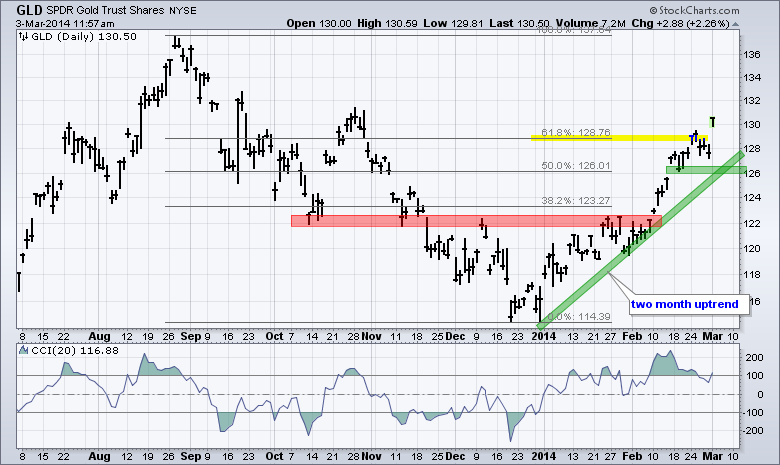 The chart above is courtesy of StockCharts.com and John Murphy, an EXCELLENT technical analyst that I’ve followed for the last 15 years. According to John, the chart, “Focuses on the two month advance in the Gold SPDR (GLD). With GLD trading near 130, it has retraced just over 62% of the prior decline. Even though the 62% area could mark a reversal zone, the trend since early January is clearly up. The trend line zone and late February lows combine to mark supportin the 126-127 area. The indicator window shows the Commodity Channel Index (CCI) moving into positive territory in early January and remaining largely positive during this advance.”

Everything seems to be lining up for gold at this point in time.

Brent Cook, former associate of Eric Sprott and one of the best mining analysts in the world believes that, “2014 should be a good year for investors to begin positioning themselves in the better metal deposits, mining companies, and the most competent explorers. The reason is quite simple: the industry is not finding enough economic deposits to replace mine production.”

To further that, Grant Williams, the prolific editor of Things That Make You Go Hmmm, in regards to an impetus for a potential violent upwards move in the gold price has stated, “I fear that it will be a shortage in physical metal because that could be very, very extreme…”

For an excellent timeline of important developments in 2013 that will affect the gold price going forward, I recommend reading Alasdair Macleod’s (Gold Money) recent post, Gold in 2013: The Foundation For 2014.

If you want to skip to the conclusion, which by the way we agree with, Alasdair states:

“The events of 2013 persuaded investors in western capital markets that gold’s bull market had definitely been broken, and that gold would probably go lower or at best move sideways in 2014. The underlying reality is very different, with China in particular managing to corner the physical market with trend-following Western analysts caught unawares.

So far, instead of continuing to fall the gold price actually bottomed on 31 December at $1182, and since then has rallied over 13% to $1340. The position today is that some hedge funds which were short have closed their positions and there are more yet to do so. There is growing evidence for the trend-chasers that the price is entering a new bull phase, with the 50-day and the 200-day moving averages both rising and about to complete a golden cross.

Central banks appear to be facing a problem of their own making. The lesson from Germany’s attempt to repatriate her gold appears to have provided prima face evidence that central banks have little or no physical liquidity left. Minor central banks, such as Finland’s, must now be wondering if gold out on lease will ever be returned to them, so may be increasingly reluctant to make their gold available for further leasing. Instead they are likely to end current leasing agreements as they mature rather than extend them.

In 2014 there is likely to be a growing realisation that the vaults in the West are very low on stock.”

Turning once again to Grant Williams:

“Gold is a manipulated market. Period.

“2013 was the year that manipulation finally began to unravel.

“2014? Well now, THIS could be the year that true price discovery begins in the gold market. If that turns out to be the case, it will be driven by a scramble to perfect ownership of physical gold; and to do that you will be forced to pay a lot more than $1247/oz.”

Well, gold is now well on its way, having risen $100 since Grant penned those words last month. Don’t get left behind!

“There’s going to be a bubble in gold stocks.” – Doug Casey

Capitalist Exploits Trade Alert service is opening for new members in March 2014.  Their track record until now has been outstanding and so we’re glad to give you exclusive access to one Free Trade Alert.  Get It Here