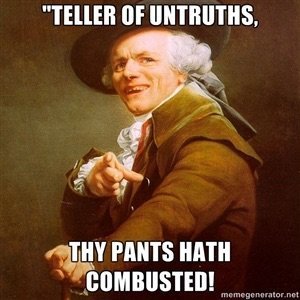 Based on English Common Law, dating back to the 12th century, The    Constitution of The United States sets a high standard for public officials.

Those standards include the following …

“The President, Vice President, and all civil officers of the   United States, shall be removed from office, on    impeachment for, and conviction of, treason, bribery, or  other high crimes and misdemeanors.”

The high crimes and misdemeanors accusation has always been left  suitably vague, and even though it was originally confined by the framers,  to government officials, over time, it come to be used more generally, to  encompass the conduct of other trusted officials within society.

One such set of “trusted officials” would be the Ratings Agencies; that small group of highly trusted companies, responsible for assessing the the creditworthiness of various asset classes and securities, traded mainly by banking institutions.

For decades, this highly specialised sector of the financial community, quietly got on with its business of “rating”, evaluating the worth of everything from mortgage-backed securities, to the finances of entire countries.

That was, until the financial crisis of 2008 erupted, when suddenly “the buck stopped” at their door, and they suddenly found themselves thrust under a critical, global spotlight, with millions of people asking …

“Just how honest are these so-called “ratings”?

That level of scrutiny and attention, inevitably led to “Department of Justice” investigations, with those investigations eventually leading to full blown charges being levelled.

The charges essentially accused them of what amounted to high crimes and misdemeanours.

Now putting aside the really rather obvious question, of just precisely why the S&P were paying compensation, to the very agency who’s job it was to make sure they were being honest, the “settlement”, raise many decidedly “unsettling” issues.

One of the most intriguing, but one which was to be expected, appeared in the official response statement of the S&P themselves, to the decision.

In part it, they declared that …  “the settlement contains no findings of violations of law”.

Well that was “convenient”, wasn’t it! For a moment there, I thought that fraud was against the law!

And I suppose that no lies were told either?

Well no, not really, because lies have been redefined as mere “misrepresentations of the facts”.

So perhaps they just “misrepresented” what was going in, or maybe just everyone else “misunderstood” what they were saying?

Or maybe … just maybe … someone should check their pants for signs of fire damage!

In this politically correct and increasingly litigious society we live in, we have somehow lost the ability to “call a spade a spade” and even identify ducks! You know the walk, quack story. It’s a duck!

But you see, if you were say, Goldman Sachs, or one of the other banks who conspired and colluded in perpetrating the Sub-Prime crimes, then your scam would never even get have got off the ground, if those “pesky ratings agencies” had “inconveniently” told the truth, about what was ACTUALLY in those “sealed boxes”, those “bundles of mortgage debt” that you were selling.

If the world knew that those serious sounding “financial investments” that banks were selling, to everyone who would buy them, from governments to workers pension funds alike, were in truth, only guaranteed to fail and default, then that would have been just too “inconvenient”.

The further fact, that these banks were not only taking out huge bets that their own products would fail, but they were also manipulating Central Banking policy (they are after all, on the board of the Federal Reserve) in order to ensure that they failed, should then come as no surprise.

As we all now know, the ensuing fallout cost us all trillions of dollars, and it was all eminently avoidable, despite the mock feigning of surprise by the banking community.

But it wasn’t always quite as bad as this.

In the early days of the advent of Corporations, as business, shareholders not only “shared” in the dividends of success, they also “shared” in the liabilities of failure too.

But much has changed since those early experiments with company law and status, and the current concept of “Corporate Personhood” has shielded executives from personal liability, to really quite an excessively cosseted degree, resulting in incalculable losses to society.

Back in the 19th century, a shareholder or executive in a bank for instance, was not simply an “armchair investor” as he is now, he was literally personally liable for the activities of the bank, and could find himself dragged down all the way to the poorhouse, if those running the bank behaved recklessly.

That level of accountability, created a real sense of healthy fear in the minds of both those running, and investing, in local banks. And as always, accountability breeds responsibility.

Contrast that, with the recent HSBC cases for instance, where executives have been completely shielded from any responsibility whatsoever.

And again, witness the astonishing level of “weasel words” deployed, to ensure that no “liability” even needs to be admitted to.

They may indeed have been freed from “liability”, but they had plenty of “lie-ability” to make up for it, that’s for sure.

Notice the headlines on Bloomberg for instance, regarding the judge’s ruling in the HSBC case.

Is it me, or was it a “drug cartel money laundering” racket that we’re talking about here?

Now that word “accord” threw me a bit, especially in the case brought before a criminal court. So I looked it up.

According (no pun intended) to Black’s Law Dictionary, an “accord” is …

“an agreement between parties, to settle their claims and differences.”

So despite a court handling the matter, the case was deemed to be a mere “disagreement” between two parties, that needed to be “settled”.

Crucially, again, no liability for any “high crimes and misdemeanors” was ever going to be sought or admitted to.

So the moral of the story, is that the bigger the bank, the more they are protected from the kind of responsibility that we’d all like to think we are protected by.

The logical conclusion to all of this, is clear to see from the present reality, where the “Too Big To Fails” are in fact now “Too Big To Jail” too.

Q Wealth can put you in touch with a wide range of service providers, who can help you avoid being affected by some of the worst excesses of the financial world.

So get in touch, and let them navigate a safe course for you, away from the world of zero-responsibility banking.

Protect your assets, your family and your freedom.