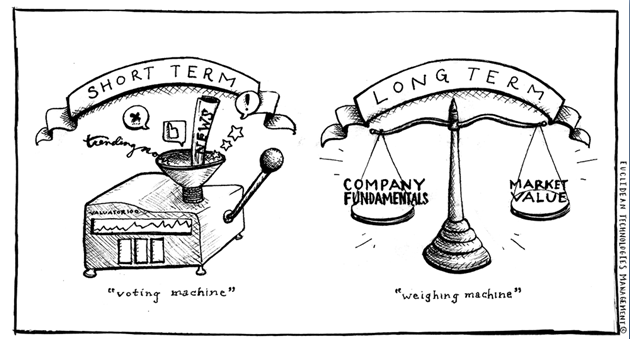 “In the short run, The Market is a voting machine.  In the log run, it’s a weighing machine.”

It has now become clear, that the Chinese authorities are no longer prepared to rely on threats of arrest against those aiming to sell large numbers of shares (those who they recently described as “malicious sellers”) in order to stabilize its Stock Markets.

It seems that they are now “ensuring” that shares are not sold at “inconvenient” moments, by setting up a new, State-funded ‘share buying’ and ‘liquidity-providing’ Fund.

China has set up a subsidiary to their State regulators, the “China Securities Regulatory Commission”.

The new entity though, is no mere talking shop, advisory Commission, it is a full blown Corporation. Unlike its progenitor though, it has “teeth” … “teeth” made of massive Chinese Central Bank-supplied loan funds!

The new China Securities Finance Corporation (CSF) has been set up and funded with a war chest of literally hundreds of billions of US dollars, and it has already been hard at work buying up millions of shares.

Perhaps we are now seeing “the method in the madness” behind why China has been persevering for so long, in holding onto trillions upon trillions of dollars worth of U.S. Dollars?

Regardless, the desperate move effectively means that China’s Central Bank has now moved into the ‘underwriting business’.

The CSF has been set up to act as an ‘interface’ between Central Bank funding, and the Brokerage houses, so that they in turn can engage in “margin lending”, in order to fund and stabilize share purchases.

The result is that the Central Bank of China, the so-called “People’s Bank of China”, is now, de facto, in the business of financing leveraged stock buying.

The development means that the Chinese Government and Central Bank, have opened up a virtual bottomless pit of debt money, with which they intend to keep the Chinese stock market flowing, regardless of any adverse external sentiment it seems.

As Bloomberg reported only yesterday, the new Chinese ‘plunge protection’ Corporation has been set up with what it described as …

“While it’s unclear how much the CSF will ultimately deploy into China’s $6.6 Trillion equity market, the financing is up to 25 times bigger than the ‘Market Support Fund’, started by Chinese brokerages earlier this month.”

If the move sounds familiar, then that’s because it has all the hallmarks of the U.S.A’s own PPT … “Plunge Protection Team” … part of America’s own “centrally planned economy”!

Long gone are the days when even the pretence of “free price discovery” in a “free market” was even claimed, either in the ‘Centrally Planned USA, or in ‘Capitalist’ China!

The two Markets have so much in common now, that China’s ‘draconian’ moves are unlikely to have the devastating effect that they might have had only a few years ago.

It seems that the 2008 Crisis really did change paradigms around the world.  `

The dramatic Chinese moves do seem to have worked though, and have stabilized both the Chinese markets, as well as China’s 90 million individual share holders too.

Although what any current “share price” right now actually tell us about the company involved, in this ‘brave new world’ of massive State intervention and price distortion, is hard to say.

In years gone by, they had a word for this kind of wholesale State purchase of assets … it was called “Nationalization”!

Although I’m sure that’s a ‘dirty word’ these days, one that no self-respecting politician in either China, or the USA for that matter, would ever use, it’s hard to avoid when the following major businesses in China, already admit that the brand new ‘China Securities Finance Corporation’ is one of their “top 10 shareholders”!

But before anyone starts ‘tutting’ and ‘’deploring’ what the Chinese have done, maybe it should be remembered that for many years now, the Federal Reserve itself has done far more to prop up their own markets and institutions, either alone or in conjunction with ‘Citadel’, a shadowy Hedge Fund that ex-FED chairman Ben Bernanke now “advises”, than anything that the Chinese have yet to unleash.

The fact is, that in many ways, even when manipulating their own market as they have been doing recently, the Central Planners in Beijing have more integrity.

Unlike the US, at least China’s Plunge Protection Team openly reveals its holdings!

Good luck trying to penetrate or get any details about the labyrinthine US government share ownership network! I think you’ll find your FOIA requests might just go unheeded.

Such speculation, used to be confined to the the fringes of economic research, and those who dealt in it were, at best, politely ignored and sniggered at.

Now, such analysis has become mainstream.

Recently, Société Générale released a report, in which they stated the following …

“China is not alone in trying to influence equity prices, Central Bankers the world over have become obsessed with asset prices, to the extent that the notion of Central Banks making outright purchases of equities, is no longer confined to the lunatic fringe”

Regardless of all that though, one thing is certain.

The new Chinese “Big Gun”, the CSF Corporation, currently has a 3 trillion Yuan stack of chips in front of it, and a remit to buy up stocks and shares “whenever needed”.

Only a fool would bet against it using them whenever necessary.