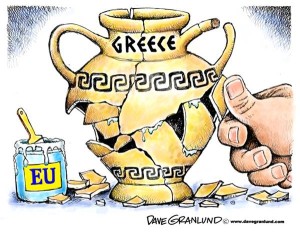 Just a quick heads up for Q Wealth Members regarding the next upcoming “Special Report”.

The rapidly unfolding, and possibly now possibly climaxing, events surrounding the Greek Banking & Debt Crisis, have led to Finance Minister, Yanis Varoufakis making it clear over the weekend, that Greece will not be paying the 1,600,000,000 Billion Euros, demanded by the IMF by midnight tonight, 30th June. 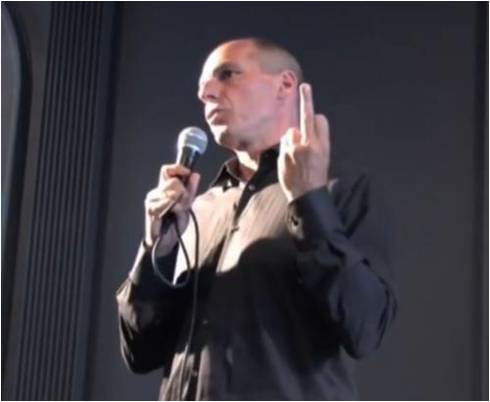 Meanwhile, despite having been flagrantly and brazenly, not to mention illegally, breaking its own rules for quite some time now by continuing to fund what it knows to have been “insolvent” Greek Banks, the 2nd member of the Troika Gang, the European Central Bank, are now also bracing themselves, in the face of Greek resistance, intransigence, and monumental stoicism.

Only the passage of the next few hours and days, will reveal the full scale of how this particular Greek Tragedy will finally unfold.

But in the meantime, the plight of the ordinary Greek people, caught up in the middle of this politically motivated crisis, has captured the attention and imagination of the world.

It even prompted one person from the UK to start a “By The People, For The People” crowd-funding campaign, via the site, IndieGoGo.com, to desperately try to raise the 1.6 Billion Euros needed.

At time of writing, his www.indeigogo.com campaign had raised just over 250,000Euros … a drop in the ocean in truth of course, with the fund still officially registering a 0% success figure.

However, as word began to spread, the IndieGoGo servers hosting the offer page, crashed, such was the interest in the issue!

The page currently reads in part … 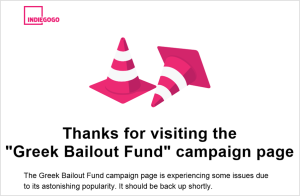 Ironically though, such seemingly “desperate measures” actually hint at the way that the entire Greek debt problem ought to have been, and could have been, handled in the first place.

Greece was given astonishingly corrupt, not to mention fraudulent advice many years ago, when it was attempting to even qualify to join the Euro.

Not only that, but the Banking system that “advised” the country’s political leaders at the time, deployed a wholly different system when they themselves needed to be bailed out, many years earlier at around the time of the outbreak of World War One!

And so it is in an attempt to take deeper a look at the origins of the Greek Debt Crisis, as well as the alternative route that could have and should have been taken initially, that forms the basis of the next Q Wealth Special Report.

The Report will be available in the Members area, and it will contain information that has only very rarely ever been shared; information that hopefully Members will appreciate knowing about and being able to share.

Of course the ever-present risk associated with what transpires in the Greek Crisis, is the unquantifiable matter of “contagion”; in other words, just how far will the “fall of the dominoes” spread, once Greek government finally shows their full hand.

It is a game of financial “Brinkmanship” that could have an enormous impact on how all our financial futures pan out, hence why we feel the importance of exploring all avenues, in trying to understand what is really going on in Greece right now.

We would therefore encourage all readers, to join existing Members in reading this upcoming Special Report.

We feel certain that it will add different perspective to the current rash of fear-mongering headlines that will undoubtedly be flashing around the mainstream media over the coming few days.

Let us know what you think once you have read it.