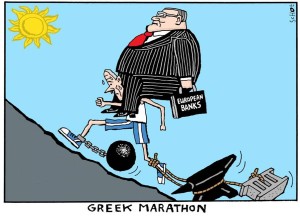 “Greece Is Now In Arrears, And Can Only Receive IMF Financing Once The Arrears Are Cleared.”

The Following is taken directly from the IMF’s own website

Statement by the IMF on Greece

Mr. Gerry Rice, Director of Communications at the International Monetary Fund (IMF), made the following statement today regarding Greece’s financial obligations to the IMF due today:

“I confirm that the SDR 1.2 billion repayment (about EUR 1.5 billion) due by Greece to the IMF today has not been received. We have informed our Executive Board that Greece is now in arrears and can only receive IMF financing once the arrears are cleared.

“I can also confirm that the IMF received a request today from the Greek authorities for an extension of Greece’s repayment obligation that fell due today, which will go to the IMF’s Executive Board in due course.”

Below too is a screen shot of the quote, taken from the same official IMF website. 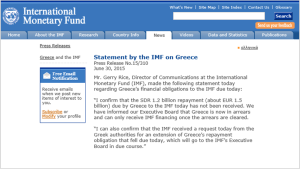 So … the wait and the endless column inches of speculation are finally over, and the worst kept secret in global finance is finally out.

At midnight last night, Greece became the first developed nation ever, to default on an IMF loan.

In the 70 years since the IMF was formed, in the wake of World War Two and as a result of the Bretton Woods Agreement, no “developed country” has ever missed an IMF payment.

Clearly Greek Finance Minister, Yanis Varoufakis has been unable to keep his promise to the IMF that he would “squeeze blood out of stone” to pay IMF loan.

But for a Member of the European Union to default like this, is not just a tragedy for the Greek people, it is also a massive blow to the credibility of the entire EU European project.

But Greece’s problems don’t end with the IMF missed payment.

Greece has other major creditors breathing hard down their noose-chafed neck, whose demands too, are steadily “piling up on the door mat!”

With no respite in view, the increasingly desperate Syriza government in Athens is due to have to pay another €6.6 Billion Euros, to the European Central Bank alone, during the months of July and August!

If it were possible though, there is an even more serious knock on effect, caused by the IMF default, one that Greece not even need to wait for those ECB repayments to be missed too.

According to the terms of the “Master Financial Assistance Facility Agreement” that Greece entered into with the ECB, if country defaults on their IMF loan, then they are automatically considered to be in default to the ECB too!

However THAT logically works!

(A copy of the Master Agreement is available at the following link http://www.efsf.europa.eu/attachments/efsf_greece_fafa.pdf )

So what happens next?

Well, according to the IMF’s own protocol, Christine Lagarde could extend a 30-day “grace period” to Greece, but, given the acrimonious and protracted nature of the conflict so far, she is highly unlikely to extend such a courtesy.

Hence the wrangling and arrears chasing could theoretically continue indefinitely.

What is also interesting about the wording of the IMF Press Release, is that the arrears have already been calculated in what many are predicting could form the basis of a future global currency … in SDRs, or “Special Drawing Rights”, with only an approximation in Euros being added in parentheses.

After the collapse of the Bretton Woods system in 1973 though, SDRs were redefined against a basket of “floating currencies”. Hence their value is now entirely in the hands of the IMF and the Forex Trading Rooms of the world’s major banks, who have of course just been caught and fined billions of dollars, for rigging the price of those same currencies!

So that should work out just fine as a solution I guess! All the IMF needs to do, is “cook up a fresh batch” of SDR IOU’s, out of that “thin air” that they keep in that exhaustible larder of theirs, and all will be well.

Subtly of course, “sky falling in” talk of “Default” will be changed to that of “Arrears” (as already seen from the wording of the IMF Press Release even!) as “the can is kicked yet further down the road”, until such times as sufficient unrest can be manufactured, or pressure brought to bear, to get what they want. War after all is such a messy business, when merely “control” is what is required.

Anyway, regardless of however the Greek Tragedy pans out, “Phase 2” of the IMF control system will undoubtedly begin to be implemented soon … “Structural Adjustment” … the real purpose of of course of the entire, politically motivated so-called “bail-out loan” strategy. Loans which do little but bail out the very banks that helped Greek politicians, years ago, to even “qualify” to join the Euro in the first place. 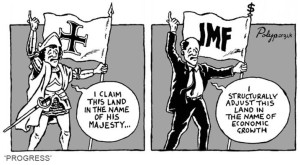 But these additional topics will be delved into a little more deeply in the upcoming Q Wealth Special Report on “The Greek Debt Tragedy”.

Until then, all we can say is please be aware that the “contagion” from the “uncharted” Greek situation could be significant, and we urge all readers to protect themselves by implementing the highly detailed step-by-step guidance contained in “The Practical International Banking Guide”.

We cannot stress enough, that heavy over-exposure to banking jurisdictions that have already shown themselves to be “legally entitled” to help themselves to some of what we only believe to be “our” money, in “our” bank accounts, as they did in Cyprus (and as they may yet do in Greece) is currently highly inadvisable.

The smart money has already “got out of Dodge”, and diversification, into the calmer “offshore waters” of International banking jurisdictions, is the very least that we ought to have already been doing for quite some time now.

So please go to the Q Wealth Report Members page or contact the Team to find out about the huge amount of additional help available there, and just make sure you are as protected as you possibly can be.