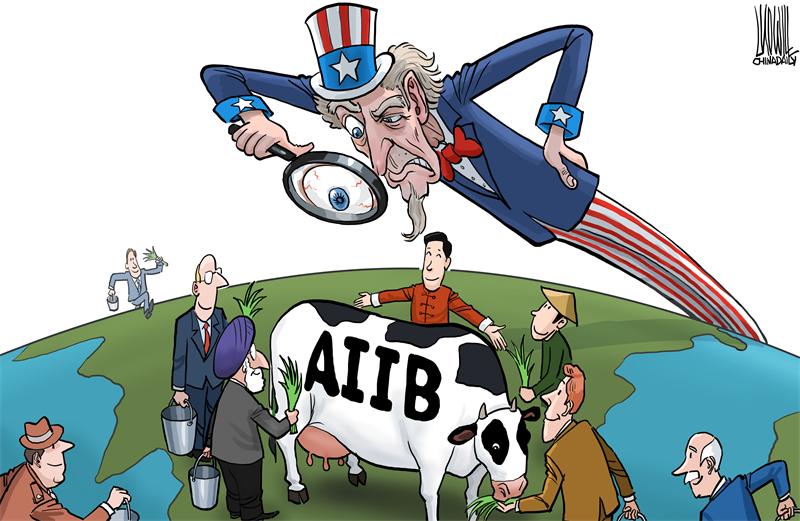 A view from Q.

Just what is the AIIB?

We have talked before about the behind-the-scenes move by banks to pull the world’s currencies into a small number of controllable “blocks”. It has been apparent for some years that “central” banks are looking to minimise their exposure by creating a number of global zones between which they can easily manipulate interest rates – and create profits.

With this in mind, we think the following developments are interesting.

Of course, the mainstream media will likely focus on differences between East and West, but our opinion is that this is just a smoke-and-mirrors game, a trick to keep up the outward façade of differences between one group of nations and another in the minds of the people, when in reality those who run world economies are in cahoots.

If you have never heard of AIIB, here is a snapshot of recent developments.

The Asian Infrastructure Investment Bank (AIIB) is an international financial institution proposed by the government of China. The purpose of the multilateral development bank is to provide finance to infrastructure projects in the Asia region.

The United Nations has addressed the launch of AIIB as “scaling up financing for sustainable development” for the concern of Global Economic Governance.

As of April 29th 2015, almost all Asian countries and most major countries outside Asia had joined the AIIB, except the US, Japan and Canada. North Korea’s and Taiwan’s applications for Prospective Founding Member (PFM) were rejected.

The bank was proposed by China in 2013 and launched at a ceremony in Beijing in October 2014. The Articles of Agreement (AOA) are due to be finalized and open for signature by PFMs in June 2015. The AOA is expected to enter into force and AIIB to be fully established by the end of 2015.

The first news reports about the AIIB appeared in October 2013. The Chinese government, frustrated with what it regards as the slow pace of reforms and governance, wants greater input in global established institutions like the IMF, World Bank and Asian Development Bank which it claims are dominated by American, European and Japanese interests.

The Asian Development Bank Institute published a report in 2010 which said that the region requires $8 trillion to be invested from 2010 to 2020 in infrastructure for the region to continue economic development.

In June 2014 China proposed doubling the registered capital of the bank from $50 billion to $100 billion and invited India to participate in the founding of the bank. On October 24, 2014, a signing ceremony held in Beijing formally recognized the establishment of the bank. Twenty-one countries signed the Memorandum of Understanding (MOU), including China, India, Thailand, Malaysia, Singapore, the Philippines, Pakistan, Bangladesh, Brunei, Cambodia, Kazakhstan, Kuwait, Laos, Myanmar, Mongolia, Nepal, Oman, Qatar, Sri Lanka, Uzbekistan, and Vietnam.

Hong Kong’s Financial Secretary John Tsang announced in his budget speech in February 2015 that the territory would join the AIIB.

In early March 2015, the United Kingdom’s Chancellor of the Exchequer, George Osborne, announced that Britain had decided to apply to join the Chinese-led Asian Infrastructure Investment Bank, becoming the first major Western country to do so. The announcement was criticised by the Obama Administration in the United States.

In response to the US criticism, the UK claimed that the subject had been discussed between the Chancellor Osborne and the US Treasury Secretary Jack Lew for several months preceding the decision. It was further stated that joining the bank as a founding member will allow Britain to influence the development of the institution.

By encouraging Chinese investments in the next generations of nuclear power plants, Osborne announced that “the City of London would become the base for the first clearing house for the yuan outside Asia.”

The White House National Security Council then declared, “Our position on the AIIB remains clear and consistent. The United States and many major global economies all agree there is a pressing need to enhance infrastructure investment around the world. We believe any new multilateral institution should incorporate the high standards of the World Bank and the regional development banks. Based on many discussions, we have concerns about whether the AIIB will meet these high standards, particularly related to governance, and environmental and social safeguards.”

Make of that what you will…we will continue to keep you posted on developments.

In the meantime, if you are interesting in opening an account in a jurisdiction outside that in which you live or operate, why not download a copy of our newly updated 2015 Practical International Banking Guide, available free to all QWealth members?

2 thoughts on “Global Banking Update – Just what is the AIIB?”