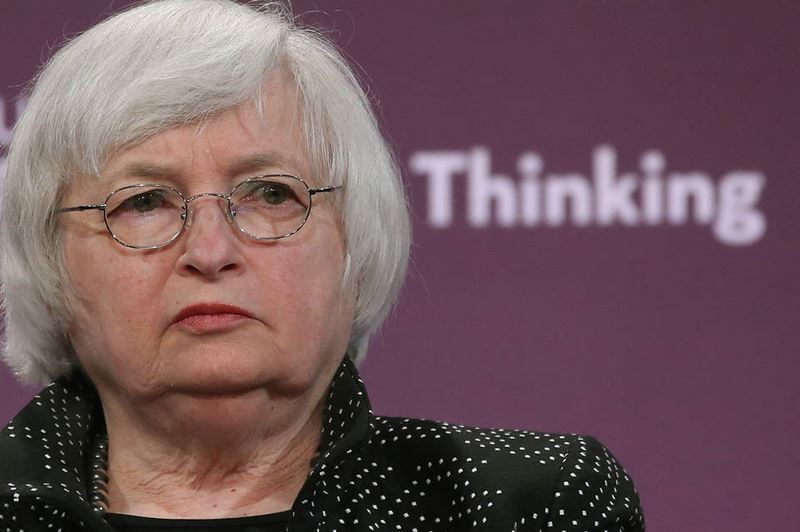 So … the “back pedalling”, the “goal post-shifting” and the internal disagreements have begun already.

No sooner had the Federal Reserve’s Janet Yellen (and other senior figures in the Ivory Tower on Constitution Avenue) signalled that they would “soon” be “raising interest rates”, up from the “floorboards” of an unprecedented flat-lining run of 7 years, than a frothy, cresting U.S. Stock Market had a “wobble” after a 200%+ bull run, and then a slew of other bad economic data comes along too, to take much of the shine it seems, not to mention the certainty, from the FED’s recent bolshy hubris and bravado-strewn rhetoric.

It boils down to the fact that eleven of the last thirteen days on the Dow, have been Dow-n days!

So perhaps those sobering statistics, as well as other conflicting data, has had an impact on the thinking of certain Fed governors, despite a surge in confidence in recent weeks, in the likelihood a cut; a surge that began in mid-July …

But it only takes one look back from mid-July to mid-May, to realise that it is in fact “volatility of opinion” that has increased significantly.

On Friday though, seeming to back pedal on Yellen’s recent increasingly bullish sentiments, several media sources quoted what they described as an “influential governor at the US Central Bank”, who had stated that …

… “Federal Reserve policy-makers have not yet decided whether to raise interest rates next month.”

It was later confirmed that the figure in question was Fed Governor, Jerome Powell.

Powell said that he and the other members of the policy-making Federal Open Market Committee (FOMC) will “analyse labor market data” between between now and their always closely watched meeting, coming due on September 16th and 17th.

Powell went on to say that …

“Nothing has been decided. I haven’t made any decisions about what I would support, and certainly the committee hasn’t”

The reason why Powell’s unscheduled appearance on CNBC morning television came as such a surprise though, was that the day before, the President of the regional Atlanta Fed, Dennis Lockhart, went on the record as saying that it would take what he called a …

“ … significant deterioration in the U.S. Economy” …

… for him to not want to start tightening monetary policy in September.

Now whenever a senior Federal Reserve governor feels it necessary to make an unscheduled intervention, to contradict a regional governor, then you know that something is being “tidied up”, a few wrists are being slapped, and the message is being tightened up.

So with such an unscheduled public “correction”, the question that is now being posed by many Fed watchers, is far from raising interest rates next month, is the FED actually instead preparing the ground and heading in the direction of joining Germany and Switzerland, in introducing “negative interest rates” by next year?

Few doubt that the current stasis is any longer going to send out the right message. Is it time for “put up, or shut up”?

The doubt is spawned from the now perennial fears that many analysts increasingly have, that there is a huge disconnect between “The Wall Street Economy”, and “The High Street Economy”.

Let’s just say that so soon after the life support of Quantitative Easing was “out-sourced” through more opaque channels in Europe and Japan, it will be well worth keeping an eye on just how flexibly the term “we’re raising interest rates soon” actually is!

To Your secure Financial Future, as always