From Robert Schulze (note:  this is an excerpt from a longer article that is featured in the latest Q Wealth Report available now to Members)

In Paraguay many things work differently compared to other countries – in many ways!

The same goes for the exchange rates.  One cannot always understand why our guarani increases or decreases, in occasions notwithstanding the trends in the international markets.

When I first arrived in Paraguay, a little less than 20 years ago – the euro did not exist, those were the days! 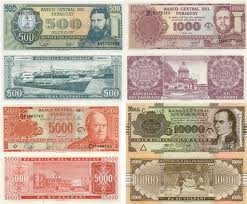 The US dollar (USD) to the Paraguayan guarani (PYG) Rate was roughly 1.00 USD = 1,000.00 PYG.  Subsequently, the Paraguayan currency kept decreasing steadily until July 2002 when the USD hit its maximum rate at 8,000 PYG, partly due to some highly speculative moves by some commercial banks. Later, upon a strong intervention from the Central Bank of Paraguay, the USD rate decreased remarkably.

The Paraguayan currency has thereafter been quite stable, experiencing a steady increase, practically ever since the year 2002.

At the beginning of this year, the guarani kept increasing, supposedly due to the weakened economic situation in the US, with its government attempting to uphold a weak dollar, especially against the Latin-American currencies.

Furthermore, large amounts of dollars were entered into Paraguay, by means of direct investments.

In addition to the traditionally strong agricultural sector, a clear increase in the economic activity was evident, with a GDP increase expected at about 11%.  By March, the USD even decreased lower than the mark of 4,000 PYG per USD ( the guarani has not been that strong in years!)

A devaluation of the guarani was rumored at the beginning of June, for the purpose of discouraging  shopping by Paraguayans in Argentina, and the massive import of Argentinian products, which were cheap as a result of a very weakened Argentinian peso.

But the Central Bank rushed to show such plans of devaluation to be false by means of massive purchases of foreign currency. Such a measure would have provoked a general price raise of all imports from every country, thereupon increasing the inflation.

But suddenly, the situation changed, the dollar started to increase against the guarani.

Is it possible that the rumors about a possible devaluation came into effect?

The official explanation was that the US Economy was recovered and the dollar had become stronger worldwide.  However, the main reason for the sudden strengthening of the dollar in Paraguay was a very different one: the massive purchase of dollars by the Argentinians, who, back in their country, rapidly sold the acquired dollars, obtaining a good profit, as they do not exchange those dollars in an official exchange house, but on the streets, under the “blue” exchange mode.  We would just call it a black market exchange.

The black market offers a considerably more attractive rate than the official exchange, as a result of the monetary restrictions imposed by the Argentinian government.

Everyone tries to obtain foreign currencies, for the purpose of outbalancing the permanent loss of value of their own currency. This high demand of dollars from Argentina generated the increase of the dollar, and, therefore, the decrease of the guarani in the Paraguayan market. Now the objective is to maintain the number of dollars in the Paraguayan market at a minimum level, so that the Argentinians may go to other countries in pursuit of their desired dollars.

Experts agree on that the two parallel exchanges system (the official one, and the “blue” one) in Argentina, will not be sustainable in the long term.

Finally, we have reached an exchange rate of about 4,500 guaranies per dollar.

This rate is very favorable for foreigners, as they will receive more guaranies for their currencies. As for future fluctuations, the Central Bank is confident of being able to overcome the same, as it has reserves of foreign currencies amounting to 6 billion dollars.

Nevertheless, it is worthy of mentioning that the guarani is quite overvalued (e.g. for the high inflation), reportedly up to 30%.

Therefore, in the not too distant future, the quotation may decrease once again, consequently increasing the rate of the euro and the dollar even more against the guarani.  There is another very important aspect which forecasts a rather cheap guarani for the future: the export capacity of Paraguay is increasing strongly, particularly in the beef and soybean markets that are widening considerably. Not to mention an overvalued guarani might restrain Paraguayan exports.

Robert Schulze is “our man on the ground” in Paraguay.

Robert is an attorney and the owner of RS Translations and Immigration Services in Asunción, Paraguay.