“Free” can be one of a person’s favorite four-letter words. It used to be that combining “free” with “WiFi” was a great thing that allowed you to stay connected wherever you went. Now… not so much. Connecting to free WiFi while outside of your home can have all sorts of risks now. Not convinced? Read this article from Market Watch and see what you think. 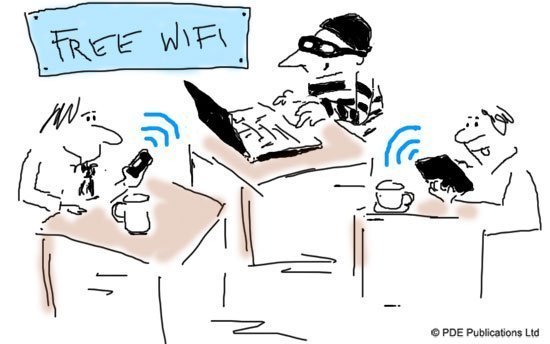 5 tourist destinations with the most malicious Wi-Fi networks

Simply having your cellphone in your pocket in some tourist destinations can put your personal information at risk.

That’s thanks, in part, to the fact that hackers target tourist destinations (since these spots tend to attract lots of people, many of them relatively affluent) with malicious Wi-Fi networks, says Varun Kohli, the vice president of marketing for Skycure, a mobile security company.

“Unlike your computer, your phone is always on, even when you’re taking in the sights,” says Adi Sharabani, the company’s chief executive. “Mobile tourists are a lucrative target for cybercriminals.” (And you can get attacked simply by having your Wi-Fi turned on, as many of us routinely do.)

Indeed, the company looked at how many of the available Wi-Fi networks near the top 50 most-visited tourist attractions in the world were malicious, from June 2014 through June 2015. “We found hundreds,” says Kohli.

The problem: If a hacker gets access to your phone, he may be able to get access to your Social Security number, bank accounts and other private information. Furthermore, hackers don’t even have to physically be in the location to grab your data using their malicious Wi-Fi network.

Here are the five riskiest tourist destinations for cellphone users in terms of the percentage of Wi-Fi networks that are malicious, according to the Skycure study:

Nearly every tourist who comes to New York City takes a trip to Times Square, most of them blissfully unaware that this is the runaway No. 1 tourist destination in the world when it comes to malicious Wi-Fi networks that a cellphone user could connect to (21.55% of all the malicious networks found in these 50 tourist destinations were in Times Square). Kohli says that part of the reason there are so many malicious networks in Times Square may be that there are a lot of people there even for a popular tourist destination (which means more opportunities for hackers) and a lot of high-profile people (which could yield higher profits), both tourists and non-tourists. “You can turn off Wi-Fi to avoid most of these attacks, but it does not protect you 100%,” notes Kohli.

Tourists come here for its impressive beauty and tranquility; Cybercriminals come for personal data. The study found that Notre Dame had 8.659% of all the malicious networks found in these top tourist destinations. One easy tip that you likely already know (but may still not do) for avoiding problems with networks is to only use networks you already know and trust, says Chad Carroll, the senior partner and vice president of information operations for cybersecurity firm Chiron; even network names that sound legitimate may not be.

Disneyland Paris comes in a close third to Notre Dame Cathedral with 8.45% of the malicious Wi-Fi networks. Experts say that those worried about the risks of malicious networks may want to avoid free Wi-Fi. “One of the most important cellphone security issues that not enough people are talking about is the increasing presence of ‘free Wi-Fi,” says Jim Lastinger, the owner of VPN provider Ghost Path. Indeed, the Skycure survey found that 8% of the total threats it discovered originated from free Wi-Fi networks. Disney has not yet responded for our request for comment.

More than 6% of all the malicious networks were found in Golden Gate Park in San Francisco. We hope that all the techies there know this tip: You can help protect yourself by making sure that if your phone begins crashing a lot or you get a warning notification, disconnect from the network immediately.

More than 5% of the Wi-Fi networks near Ocean Park, an amusement park and marine park in Hong Kong, are malicious. Rounding out the top 10 riskiest destinations on this list are the Las Vegas Strip; Hollywood Walk of Fame; Union Station in Washington, D.C.; Faneuil Hall Marketplace in Boston; and Disneyland Park in Anaheim. Those hoping to keep their information secure may want to avoid using an unlocked phone, says Todd Inskeep, an advisory board member for the security-focused RSA Conference.

Our thanks goes out to Catey Hill for putting together the research for this article. If you would like to read the entire article then please click here.

Is there a solution to protecting yourself when on public wifi?….. Yes!

We outline all that is required in our newly released report in the section “Secure Your Internet Use”.

You will find many practical and useful tips in The Complete Guide to Computer Security… for Mere Mortals. The security and privacy of your personal information is within your control. Read the report and start to protect yourself now.