The underlying theme was simple and clear… now, while the U.S. dollar is strong, is the time to consider diversifying into depressed, non-dollar denominated assets. Take advantage of the dollar’s strength… while it is strong. 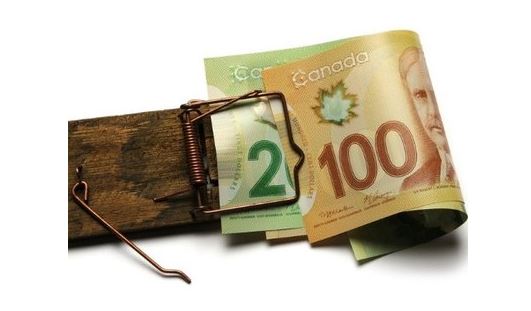 It’s no secret that the greenback rules the currency markets today. Its recent gains against the yen, the euro, the pound, the Aussie, the loonie and the kiwi have been stupendous, to say the least. And the greenback has scored even larger gains against exotic currencies like the Malaysian ringgit, the Indonesian rupiah, the Indian rupee, the Russian ruble and the Brazilian real.

The dollar is strong almost everywhere. Yet most investors are just sitting on their hands when it comes to currency diversification.

Last week, I spent a few days in Canada. Last month, I spent a few days in Mexico. A few weeks prior, I spent some days in Europe. What I quickly recognized is that there are massive bargains out there in the currency markets. These bargains may get even better, but they won’t last forever. And, as an investor, you’ve got to take advantage of low-hanging fruit when you see it.

The Canadian dollar is one of the choicest fruits.

The modern currency market is a “faith-based” system. There is no currency on earth that has true intrinsic backing. They are all backed by confidence and faith. It’s up to you as an investor to determine which countries are doing the right things to enhance future stability and growth and which ones are just existing on a precipice, one bad economic cycle away from a currency crisis.

Argentina comes to mind as one of the latter situations. A country rich in natural resources, but poor in governance and transparency. It is a debtor nation that has defaulted on its obligations more than once in recent memory. A nation where the government vilifies the wealthy while government officials enrich themselves on the backs of the poor. The peso devalues frequently for a reason: The world believes it to be worthless.

On the other end of the spectrum are two countries that offer strong prospects, but suffer through cyclical declines based on their economic DNA. These two countries, Australia and Canada, fare very well during commodity booms, but fare less well during busts. Right now, we are in a commodity bust. Prices of everything from iron ore to crude oil have crashed. Accordingly, the Australian and Canadian dollars are both depressed.

Four years ago, a nice dinner in Toronto would cost about the same as a comparable meal in Chicago. Today, that same Canadian dining experience is about 25% cheaper thanks to the falling value of the loonie. 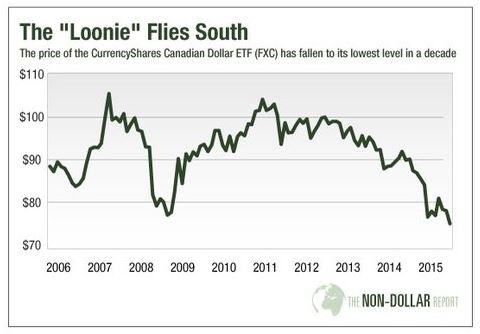 But the Canadian economy has not plunged by 25%. Its debts have not increased by 25%. In fact, Canada’s federal net debt stands at around 34% of GDP, which is only about one-third the quantity of net debt that the U.S. government has amassed.
So why has the Canadian dollar been so weak? What gives?

Oil is a major export, as are other resources like nickel, gold, etc. But what investors fail to realize is that the Canadian economy is not as dependent on resources as it was in the past. If it was, the currency would have plunged even lower. Furthermore, the Canadian government is not as indebted as it once was. Compared to the U.S. and most other developed nations, Canada has become a paragon of fiscal responsibility.

For these precise reasons, I suspect the Canadian dollar, like many other major foreign currencies, is very close to a major low against the U.S. dollar.

Bottom line: It’s time to look outside your borders, and maybe even your comfort zone, and prepare to profit for a dollar decline.

Karim Rahemtulla
For The Non-Dollar Report