Can Americans still hold secret offshore private bank accounts? A controversial question for sure – and one the most people are afraid even to talk about today. So much for a free press.

I’ll give you my answer to this question later, but first let me tell you about a little case I’ve been working on recently.

If there’s one thing that gets up my nose it is the presumption of guilt, not giving people the benefit of the doubt. Lawyers, of all people, should know that citizens are regarded as innocent before the law until proven guilty.

Is it ethically right, then, that U.S. lawyers are now going after Swiss bank account holders trying to get them into voluntary amnesty programs without first investigating the circumstances to see if that is really the right course of action for the investor? Is it right to ask somebody to own up to a crime without at least first asking if they committed it? Of course not.

There seems to be a presumption that any American with a Swiss bank account is guilty of tax evasion. This is purely based on a hysteria whipped up by the media at the behest of the IRS, and I personally think it’s time Switzerland stood up for itself better and told the truth instead of being walked over by the U.S. That, however, is a problem for the Swiss. A big, rather expensive problem, as you will see in a minute. 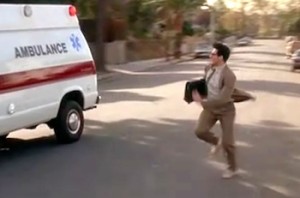 The following text is part of an email that was forwarded to me recently by a client. It was sent by what is normally regarded as a reputable international law firm, one that I would not normally expect to engage in such ambulance-chasing tactics.

“On behalf of XYZ Bank in Switzerland, we are contacting you regarding your beneficial ownership of ABC Corporation at the bank and the consequences under the U.S. Swiss Bank Agreement.

“Under the terms of the U.S. – Swiss Bank Agreement, your account has been identified as a U.S. related account, which meets the criteria for which the United States will submit to Switzerland a treaty request to hand over the account data. As a result, you may face monetary penalties and criminal charges. Please contact me at your earliest convenience.”

The fact of the matter is that the recipient of this e-mail, whilst a US citizen, has not lived in the US for all his adult life. He lives in a place where there is, literally, blood in the streets – not a very safe place to keep assets. So, logically enough, he happily held a Swiss bank account for many years.

This account was purely for asset protection – nothing to do with tax evasion. I know for a fact that this client has, via a US-based CPA, diligently filed his tax returns and FBAR forms every year with the IRS for longer than he can remember.

About four years ago his Swiss bank closed down the account, because of the fact he was a US citizen. He therefore moved it to another mountainous European country that still accepts Americans, where he is happy today.

Yet now, it seems, the US lawyers have got hold of the mailing list of account holders – from the Swiss bank that closed his account 4 years ago. This happened as the result of an agreement signed between the USA and Switzerland aimed at rooting out undeclared accounts.

The point of the text above is obviously to scare people. A direct-response copywriter trying to sell a miracle cure pill would be proud of this language. My first advice to my client was to ignore the communication. He is under absolutely no obligation to reply.

First and foremost, he’s not guilty of anything.

There is nothing illegal about having a Swiss bank account. Ultimately if his information gets reported to the IRS there is nothing they can do about it, because the account was fully reported.

Secondly, let’s examine that language again. “…meets the criteria for which the United States will submit to Switzerland a treaty request to hand over the account data.” What is that supposed to mean?

Basically it means that the Swiss bank will be obliged to hand over certain information, without actually identifying the account holder, which theoretically might enable the US to form a treaty request to get information on that account.

This system is a kind of hotch-potch that was scraped together by U.S. and Swiss negotiators that certainly won’t achieve its stated goal of getting information on account holders. I just can’t see it working in practice for actually getting information. However, it suits the US very much, for two reasons:

In order to participate in this program, Swiss banks must agree to pay the Americans a civil penalty of between 20% and 50% of the total value of the American-related accounts they held.

What we have in this particular case, is the absolutely amazing situation of a Swiss bank agreeing in principle to pay a monetary penalty on this particular account even though no crime was committed. I use the word “agree” because the word “volunteer” would not really be appropriate, even though it is theoretically a voluntary program. It is rather like the shopkeeper when a thug shows up and promises to set fire to the shop unless the shopkeeper “volunteers” to pay a security contribution.

Can the Swiss bank legally avoid the penalty in this case, since the account was fully declared all along? Hmm, they are really between a rock and a hard place here. Here’s what the IRS have to say on the matter:

The determination of the maximum dollar value of the aggregated U.S.-related accounts may be reduced by the dollar value of each account as to which the Swiss bank demonstrates , to the satisfaction of the tax division, was not an undeclared account, was disclosed by the Swiss Bank to the U.S. Internal Revenue Service, or was disclosed to the U.S. Internal Revenue Service through an announced Offshore Voluntary Disclosure Program or Initiative following notification by the Swiss Bank of such a program or initiative and prior to the execution of the N.P.A.

So, maybe the bank can prove to the IRS that it was not an undeclared account? But how?

This particular account holder is certainly in no mood to co-operate with the bank, having been first thrown out as persona no grata then sent threatening letters years letter by ambulance-chasing lawyers.

In this particular case, the account holder could apparently save the bank over a million dollars in penalties by proving that his account was declared. I suggested to him, half in jest, that he could reply to the bank that he is prepared to provide documentation that he is compliant, if the bank agrees to split the penalty savings 50-50 with him. I’m not sure what the IRS would think of such an arrangement but I can imagine that monetary incentives might encourage more co-operation from former account holders. That said, the whole morality of it is questionable, and demanding payment for co-operation really would amount to playing dangerous games with the devil.

However, my friend whom we are talking about here is elderly and just wants a quiet life. He has no desire to get involved in lawsuits. He’s therefore going to sit tight, seal his lips and ignore all communications from the bank and its lawyers. I guess the bank will end up paying the IRS.

And in many similar circumstances, who knows if the account holder might even have died or simply can’t be reached. The bank will not have documents on file, because back in those days it was just not normal to ask for proof of tax compliance from account holders.

Even, for that matter, if the account holder had hypothetically already gone through one of the voluntary disclosure programs in the last four years without telling the bank (and why on earth would he tell them, since they already terminated their relationship with him?) then that doesn’t help the bank either… they are screwed again, because the disclosure was not done “following notification by the Swiss Bank of such a program.”

Wow, what a convoluted situation.

In a way I can feel sorry for the bankers… they already closed down the account 4 years ago, losing and upsetting a good long-term client, to keep the Americans happy… and now they are being dragged through this again.

On the other hand, they had an option not to participate in this extortion. Ultimately, if it had been my bank I would certainly have stood up and said no to the IRS… but the bank’s management are of course not taking decisions with their own money and they want to be able to travel to Disneyland with their kids without fear of being arrested, so I can see why they would agree to this.

What can we learn from all this?

The whole world of international diplomacy is a game of smoke and mirrors. I’ve been saying for years that the American crackdown on Switzerland amounts to scare tactics and that it’s unlikely that any information would be revealed if account holders would just sit tight and not turn themselves in. That said, and for the avoidance of doubt, I certainly cannot recommend that course of action! And it would not be for the faint hearted!

These days, Americans and others should always expect full transparency in international banking. Although bank secrecy still exists in some places, it is indeed dying out.

There are certainly ways to bring money back under the radar, completely legally of course, without attracting undue attention and without going through a voluntary disclosure program. Unfortunately these methods typically make less money for the lawyers involved, so the lawyers in the US and elsewhere will continue to push people into government-mandated programs.

One thing is for sure: any Americans, or others, who receive this type of ambulance-chasing letter should take serious professional advice BEFORE they reply or even acknowledge receipt of such correspondence.

Even a simple “I’m considering it and will get back to you” could be taken as acknowledging the existence of such an account, something that might be a huge mistake. And this professional advice should be from somebody who knows what they are talking about and has experience of similar situations. For Q Wealth Members, we can make referrals to suitable professionals.

Fortunately, the banking scene for Americans is looking brighter and more international private banks are accepting American clients again, provided the clients provide evidence that their accounts are being reported.

Our Practical Offshore Banking Guide is a good option for those looking for new international banking alternatives. Also very important is to consider residence and citizenship planning.

Stay tuned and watch this space for more, undoubtedly exciting, developments in this game of smoke and mirrors!