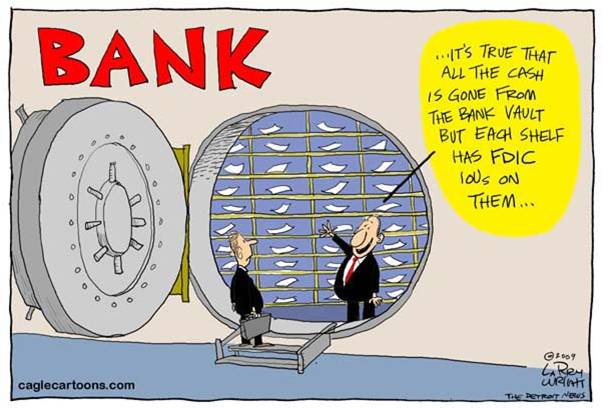 But All U.S. Bank Accounts Are “Insured” by the FDIC … Right?

Well the answer to that question very much depends on how we define and understand the term … “insured”.

The Federal Deposit Insurance Corporation (FDIC) is a private corporation, that was set up under the instructions of the United States government, under the recommendations and provisions of the “Glass Steagall Act” of 1933.

As an aside, 1933 was the same year that President Franklin D. Roosevelt used the powers of the 1917 “Trading with the Enemy Act” to issue an Executive Order that demanded that every citizen in possession of gold coins, gold bullion or gold certificates, turn them in to the Federal Reserve Bank.

The FDIC then, provides “deposit insurance”, which purportedly “guarantees the safety of deposits in member banks”.

Below is an extract from the Chairman’s Message from the 2014 FDIC Report.

… the Chairman has the following to say:

“Under a long-term plan based on the Dodd-Frank Act, requirements to rebuild the DIF, the FDIC has had a steady increase in the year-end fund balance from 2011 through 2014.

Recently, lower than estimated losses for past bank failures, together with assessment income, have contributed to the increase in the fund balance to $62.8 billion, as of December 31, 2014.

The fund is on track to reach a reserve ratio — the ratio of the DIF fund balance to estimated insured deposits — of 1.35 percent by September 2020, as mandated by statute.

Now just let that sink in for a moment.

The FDIC is saying that their Deposit Insurance Fund, currently only has enough er … “funds” … to cover just 1.01% of the bank funds at risk!

Ridiculously, the same FDIC, forecasts that they will not even reach the, still pimple-sized, government-mandated minimum ratio requirement of just 1.35% … until 2020!

In other words, even if the FDIC does meet such a target, which would require no banking crises until then, they will still be in worse shape than the banks that they are supposed to be underwriting, all of whom are mandated to hold much larger, if still wholly inadequate, so-called “reserves”.

But it gets worse!

So essentially, the FDIC is now supposed to pay out more than twice as much money as before, with unlawfully inadequate levels of funding.

So the answer to the question posed in the title of the post, is yes, technically bank accounts are “insured”, but in such an inadequate fashion that it beggars belief really.

The report goes on to say, that on top of all that, banks (and their activities) are larger and more complex than ever, and that their current policies and capabilities are …

“… not sufficient to mitigate the complexities of large institution failures.”

So out of their depth do the FDIC feel, that they openly admit that they are …

“… seeking comment on what additional regulatory action should be taken …”

So the US government is in a situation where it is now having to buy up much of its own debt, its banks are carrying just as much if not more risk than ever, and the company tasked with “insuring” them, is asking for advice on how to handle the situation!

So sure, we can rely on all of that … or … we can realise that they are all “out of control” and are just waiting for “the next shoe to fall”.

Right now, savvy Q Wealth Report readers are not hanging around to “see how this one plays out” … and they are taking things into their own hands.

In case you missed it, a few days ago, Q Wealth Report released the latest 2015 Edition of “The Practical International Banking Guide”.

If you are not yet a member of the Q Wealth Report, then we would urge you to make that a priority.

That way you can access the Banking guide for free, as a part of your exclusive member benefits package.

The step by step Guide walks you through the steps that can be taken to become YOUR OWN form of “deposit insurance”!

So we cannot encourage you enough, to take the steps necessary to secure your financial future, as we face the potential of yet more turbulent times in the years ahead.

The days of relying on “the government” to look after our financial affairs, are long over … if they ever existed at all … which they didn’t.

So make sure you sign up today, or at least obtain your own copy for just $97

Either way, do whatever you can to get that Guide into your hands …

You’re going to need it!

To Your Secure Future as always