Financial column writers around the world must have had their “Black Monday” headlines already written over the weekend, leaving just details of the exact numbers to be filled in today.

Qi Yifeng, senior analyst with CEBM, a prominent Shanghai consultants probably put it best, only moments before trading on the Shanghai Composite began.

“The market is in a down-trend.

and there’s no fresh money coming in.

With no RRR [reserve requirement] cut over the weekend,

the market will head directly south.”

The Shanghai Composite Index tanked virtually all day, eventually plunging by over 8%, down to 3,192.

In so doing, it has now surrendered ALL of the gains that it had secured in 2015.

Below is an at-a-glance graphic depicting the scale of the slide of the last 7 days. 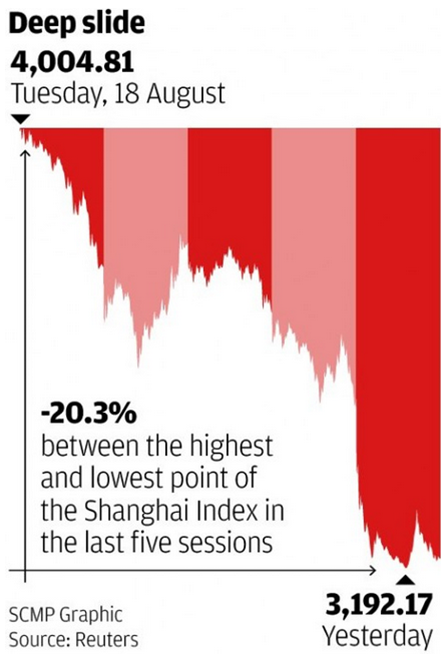 “This is a real disaster, and it seems nothing can stop it.

If we don’t cut holdings ourselves, the fund faces risk of forced closure. Many newly started private Funds have suffered that recently.

I hope we can survive.”

The catalyst is that after today, more than $5 trillion has been wiped off the value of global stocks, ever since Beijing devalued the Yuan a fortnight ago.

The Yuan devaluation has been the trigger for the current market mayhem. What that move did, was it fuelled fears that China’s economy was in worse shape than the authorities admitted.

Inevitably the contagion spread to one country after another, with many posting their worst daily percentage declines since the 2008 Crash.


The Philippines Stock Market crashed by 7%

The Australian ASX 200, especially heavily exposed to China, suffered badly, dropping by more than 4%, only just cling to its psychologically important 5,000 points level, but seeing 70 Billion Dollars of its value wiped out. In so doing, it posted its worst 1-day fall in more than 6 years.

In a recent Q Wealth report post, we touched on the double ‘pincer movement’ that has been crushing Commodity prices in recent times, along with the consequent devastation that that has caused to the markets of the Emerging Nations.

Today’s carnage then, did Commodity prices no favours at all, with oil, copper, aluminium and host of others, all feeling the brunt, with all of the consequent knock on effect that had on mining stocks.

According to Kit Juckes of French Bank, Société Générale, commodity prices have now hit their lowest level in 16 years.

We won’t create a list here, but sufficient to say that today, the Malaysian Ringgit for example, hit a 17-year low against the US Dollar. Those who have read the recent Q Wealth Report on Commodity crisis, will understand the implications of that.

Futures prices in both London and New York were already reacting to the carnage, with both indices showing hundreds of points of decline, in over night trading.

That means that the FTSE is down 17% from its high, only 3% away from officially entering a Bear Market, and seeing almost £74 Billion wiped off its value.

Glencore, the mining conglomerate, so heavily exposed obviously to to both China and the Commodity crisis, was one of the hardest hit, crashing by 13% to a new record low.

The pan-European Stoxx 600 Index, suffered its worst day since 2008.

It ended the day 5.4% lower, bringing its total losses since the start of the month of August, to €1 trillion, in what was the worst day in European markets since 2008.

Even before the US Markets opened officially, US Stock Market authorities were forced to react.

The Dow, S&P 500, and NASDAQ Futures Indices all went “Limit Down” close to the open, and were suspended.

In response, European Stock Markets plunged further, dipping by almost 8% on the day.

In an incongruous moment, light-hearted moment (although I suspect he was quite serious!) U.S. Presidential hopeful, Donald Trump, insisted that he could sort out the mess, tweeting that …

“Markets are crashing – all caused by poor planning

and allowing China and Asia to dictate the agenda.

This could get very messy!

Sorry, I just don’t seem to be able to find the “head slap” icon!

Meanwhile, back in the room, at one point even Facebook was down 14%, and Apple down 11%, so it wasn’t all bad news! They both were to dramatically recover later in the day by the way, with Apple actually likely to finish the day in positive territory.

At one point, the VIX Index, a.k.a. The Fear Index, peaked at 53 points, a level not seen since the Lehman Brothers disaster. In fact, many observers suspect that it was worse than that, with Bloomberg even reporting that the Index failed to “update” at one point, for a period of 30 minutes!

Of course you know that things are bad, when the Whitehouse steps in, as they did at one point, with Josh Earnest, the president’s chief spokesperson, reassuring everyone (or maybe not!) that would listen, that …

… which I guess is stretching things to say the least, but that’s the subject of another post entirely!

Speaking of other posts to come, it’s clear that the fabled “Plunge Protection Team” were out in force as the day has progressed, which will again be the subject of an upcoming “Karlsson Report”.

With 30 minutes to go before the Closing Bell, prices are sliding again, on heavy volume, already the heaviest of the year, with 11.6 Billion shares already have been traded.

The wild swings and volatility are continuing into the Close, with the Dow now down just 390 points, with a few minutes to go. Given that is was down over 1,000 points earlier in the day, and was again down almost 600 points just 30 minute ago, can we describe it yet as having a good day?

The Closing Bell came with the three majors looking like this …

Bloomberg’s Alix Steel, called the day “one of the craziest trading sessions” she had seen in years.

Could have been worse, but it was still a decidedly un-comfortable day, and comfortably the the worst day in US Markets since 2011.

Tomorrow as they say, is another day, and we haven’t even made it to September and October yet!

If a day like to day has been enough for you to want to seek the protective, calmer waters of offshore, then we could not agree with you more.

There are strategies that “the smart money” has already taken advantage of. We’d love you to join them!

Please get in touch, join as a Member, or call our help desk.

If indeed there are worse days to come that this (as many observers firmly believe) then you may look back on your decision to join us, and know that it was one of the smartest moves you could ever have made.