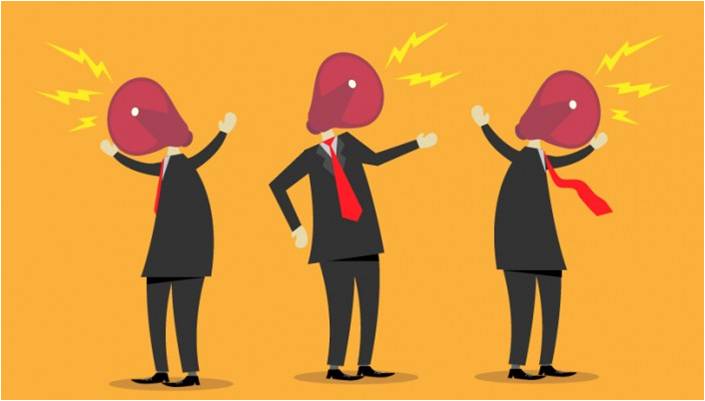 Sorry … but you sometimes just have to laugh, at the “straws” to which some financial media “Talking Heads” are seen “clutching” at times!

Yesterday morning, during what was prematurely dubbed by some as “Recovery Tuesday”, following on from “Black Monday”, a well known financial pundit (who will remain anonymous to spare his blushes) said that he had discovered some …

“… encouraging news on the US economy”

Well that had to be good I thought, right?

So I pricked up my ears to hear the details of precisely what this “encouraging news” was that he was about to share.

Turns out, he wasn’t referring to any ‘hard numbers’ that had come in, but to a survey; a survey from The Conference Board’s monthly “Survey of Sentiment”.

What it showed, was what he triumphantly described as a “spike in consumer confidence”, with the headline figure rising from 91 points in July, to 101.

He then also referred to what the Board call their “Present Situation Index” (yes that really is the nebulous name they give it!) and that too, had also “spiked” … surging from 104 in July, to 115.

Intrigued and a little baffled by this Present Situation Index, given the …er … “present situation” that existed … I did a little digging, as I tend to do.

Well let’s just say that it didn’t take long to find out that Talking Head guy’s interpretation of the “Present Situation Index” had really rather a serious flaw!

You see when I checked out the time period during which the survey was conducted, it the failed to include something rather important to a “Present Situation Index” …

In fact, as another journalist was to not so put it later in the day …

“The Survey was actually taken before China

People may be reassessing the situation now.”

Now that was just an unimportant, you could say, insignificant snapshot, of the sort of thing that goes on every hour, on the often-times trance-inducing TV screens of the financial media.

Today, financial Talking Heads are the de facto “spin doctors” of the Banking and Financial World.

Part of their role is to aid and abet in the efforts to “kick the can down the road”; the fraudulent activity which today has replaced all notions of “free market” economic activity.

The Talking Heads are there to ensure that nothing “scares the horses” too much, while the greatest money extraction system ever devised by the mind of man, has its wicked way with the populace!

George Orwell used to work in the Ministry of Truth. His job was to sanitize the news, and ensure that the Party’s “Double Speak” became the only “truth” there was.

Today we live in a world beyond that which even Orwell imagined. Not only do we have to endure the “double speak” of pundits who spin their own data, we are oppressed by the “triple speak” of a system that hides the under-lying reason for the lying.

In upcoming Blog article and Karlsson Reports, we will be shining a light into some of the very darkest crevices of the banking and financial world.

We have already looked at some of the overtly fraudulent scams and cover ups that Banking engages in, and we aren’t going to stop exposing those as they arise.

But we’re also going to open up a discussion of the foundational fraud that has allowed the infestation of minor “side show” frauds to multiply.

As a hint, here is a cartoon that was sent to me my a colleague who I have been working with for several years now. 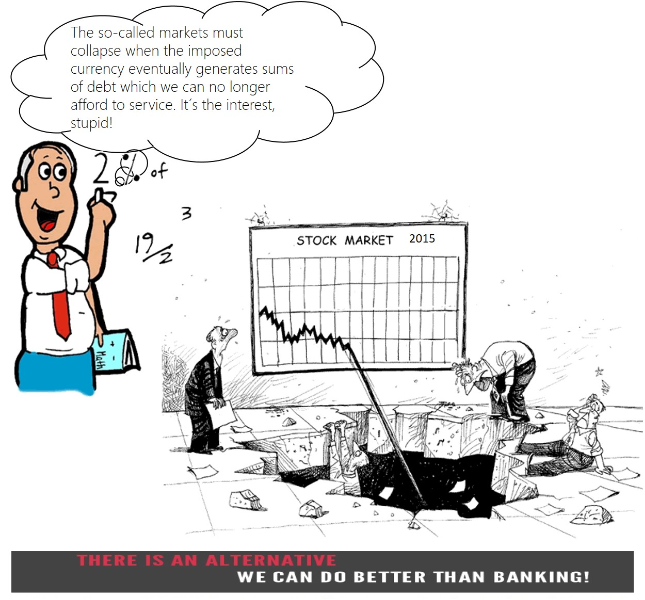 The speech bubble, in case you can’t make it out, reads as follows …

“The so-called markets, must collapse,

when the imposed currency eventually generates sums of debt,

which we can no longer afford to service.

And it is that final line, adapted from the line that Bill Clinton’s scriptwriter wrote for Slippery Willie, that holds one of the two keys to unlocking, what is in truth, an ancient mystery.

“Mrs. Clinton’s Husband”, and her house of cards business partner, made famous the line … “It’s the Economy, stupid!” … in the run up to his first election as President.

Yes, we’ve all talked before about the “Debt Elephant In The Room”, and it’s true, even talk of debt is horribly obfuscated or even ignored and swept under the carpet as a “necessary evil”.

But, under-pinning the already “double speak” issue of “Debt”, is the virtually ignored and taboo subject of “Interest” … or “Usury” as it used to more accurately be called!

Usury is a word that has had its true meaning virtually expunged from the record. It has even had it very dictionary definition “modified” over the years, to mean merely “excessive interest”. In it’s original form, usury was the charging of any interest.

Now when we are faced with a Central Banking System, through which all money is created as “debt loans”, any yet ZERO money is ever created to pay the Usury/Interest that will be extracted, then what we have been burdened with, is an evil game of “Monetary Musical Chairs”, where some human beings are guaranteed to be “not find a chair” and be declared bankrupt.

And that, I’m afraid to say, is a mathematical certainty!

Anyway, all of this this will be expanded on in much more detail in future Karlsson Reports in the days ahead.