On January 23rd, the Bulletin of the Atomic Scientists announced it was setting the Doomsday Clock forward to 100 seconds to midnight.

‘The Doomsday Clock’ sounds like something out of an apocalyptic sci-fi thriller, and you would be excused in thinking it is some kind of gimmick.

The problem is, it isn’t.

In order to properly explain the significance of the Doomsday Clock – and how best to react to it from a wealth, health and security perspective – it will make sense to first outline a bit of its history.

In 1945, a group of scientists and physicists that had worked on the Manhattan Project producing the world’s first nuclear weapons (which were ultimately dropped on Japan, ending WWII) concluded that the world required some kind of measurement to quantify just how close humanity was to total annihilation.

They had witnessed (and made possible) the incredible power of destruction humans were now in possession of, and so felt a responsibility to create a system of measurement that could be used to prevent human-induced destruction.

In 1947, this non-profit group of scientists announced the creation of The Doomsday Clock. The clock is a metaphor for how close humans are to Armageddon, and it has been moved 24 times since its inception.

Its most recent move brings it the closest it has ever been to the figurative ‘midnight’, where humanity manages to destroy itself through unchecked scientific and technical advances.

What that means is according to The Bulletin, which includes 12 Nobel laureates and many other non-partisan, respected scientists, is that humanity is currently in a more precarious place than it was during the heigh of the Cold War, or indeed any other point since 1947.

According to the Bulletin, the reasoning for the new move is as follows: 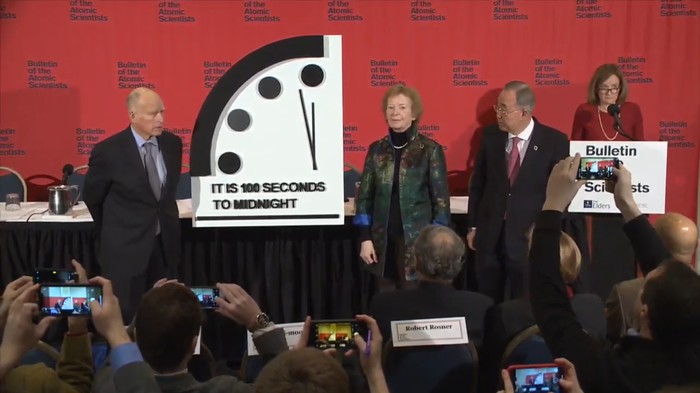 The Bulletin of the Atomic Scientists announcing the move of the Doomsday Clock forward to 100 seconds to midnight. 23 January, 2020

So are we doomed?

The idea that the world faces serious challenges probably comes as no surprise to you.

Whether we agree or disagree with the science surrounding climate change, and whether it is human-caused or not, does not change the fact that people are often affected by climate-related problems and natural calamities.

Global tensions are rising, and the international order is in a period of potentially dangerous transition and upheaval.

There are obviously large-scale dynamics at play that are out of our control.

What is in our control is how we navigate these dangerous times. Being paralyzed by fear of enormous existential threats – human induced or otherwise – such as nuclear war, climate catastrophes or total economic breakdowns, is not the answer.

For many people, we seem to be faced with three choices on how to react:

Here at Q Wealth, we want to offer another option. And that is to move forward, enjoying life as best as possible, while also taking precautionary measures to protect our wealth, health and security.

We’re not saying either of the first three choices are bad or misguided – we just want to offer a different avenue that allows us to prepare for the worst while continuing to live as independent people that are connected to the world around us, though not totally reliant on it.

One of the best and most simple ways of protecting our wealth is by buying gold. We’ve outlined the ways to do that in the 2020 Gold Report, which was released to our members last week.

Our next members’ report is going to be more focused on security, and the ways in which you can establish residency in foreign countries, so that you are never held hostage to one particular group of politicians, or single territory.

Following that, we will also have a special healthcare report focused on the different countries that offer world-class private healthcare, often at a fraction of the cost of what it is in the West.

If you want to get an idea of some of the other topics that we will be covering as the year progresses, we invite all of our subscribers to download the free 2020 Survive and Thrive Guide. That provides a basic outline of the kind of areas we will be looking at in greater detail in our members’ reports.

Ultimately, the way to make the most of our research is by becoming a paid member, which is still at the very discounted price of $5, which it will be kept at until we release our second residency report.

If you would like to find out more on what membership gets you, we invite you to read our article outlining the key differences between an ordinary subscription and membership.

Our goal is to provide the most comprehensive information out there for you to live your life as independently and happily as possible.

We might not be able to control Doomsday, but we can affect the quality and wealth of our lives in the meantime.