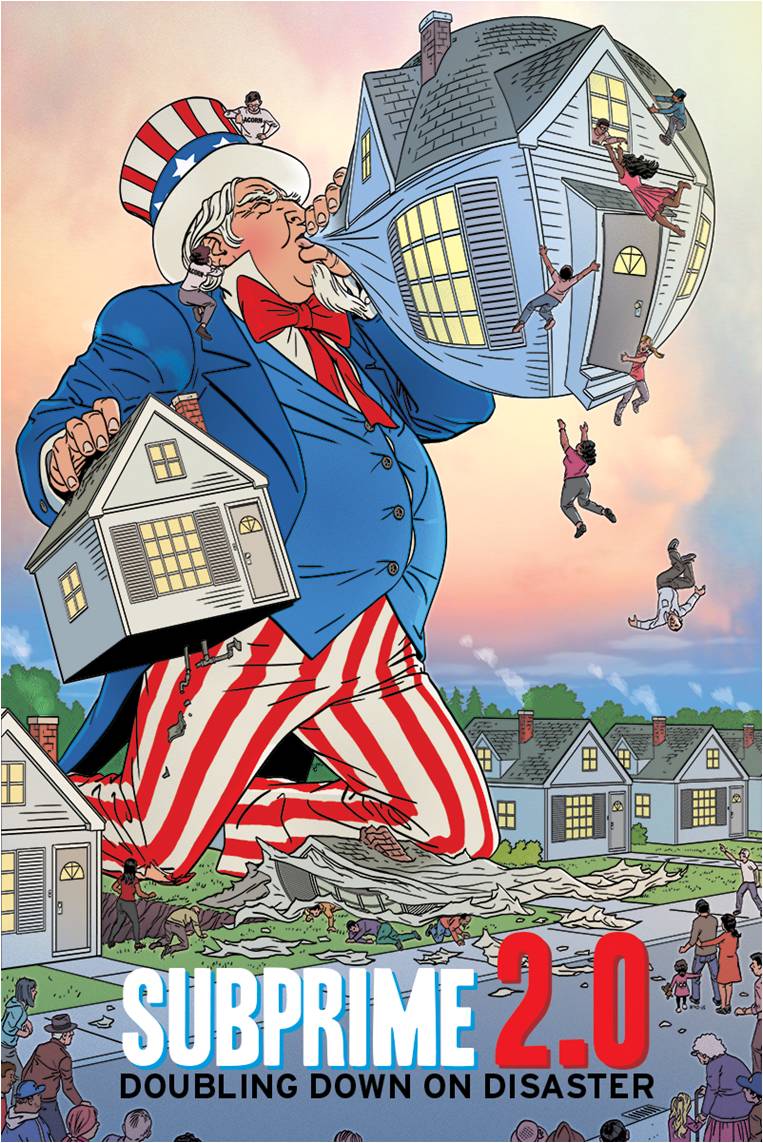 to the financial sector, and

the economy as a whole”

When it comes to respected Establishment Economists … the kind that Central Bankers, increasing it seems, merely claim they take heed of … then few can claim to rank as highly as Martin Feldstein.

Feldstein’s list of achievements include being resident “Professor of Economics at Harvard University”, as well as President Emeritus of “The National Bureau of Economic Research”.

And that pedigree of his goes back a long way too.

For decades now, the name of Martin Feldstein has been one of the very first names on the lips and lists of Presidents, when time of economic crisis have called.

From 1982 to 1984, he was invited to chair President Ronald Reagan’s “Council of Economic Advisers” … and by 2006, he was also appointed to President Bush’s “Foreign Intelligence Advisory Board”.

More recently, in 2009, Feldstien was also invited by President Obama, to play a major role as part of his “Economic Recovery Advisory Board”, in the wake of the 2008 Crisis.

On top of those specific emergency assignments and appointments, Feldstein also serves on the Board of Directors of the “Council on Foreign Relations”, the “Trilateral Commission”, as well as the “Group of 30”, a non-profit, international body that “seeks greater understanding of global economic issues.”

Now regardless of what we personally may think of institutions such as these, there is no doubt that Feldstein is a towering figure in the world of economics.

So when an Ivory Towers figure of the stature of Feldstein, starts telling The Fed that their policies have created …

“ … dangerous risks to the financial sector, and the economy as a whole …”

… then you know that the Fed might just be “playing with fire”.

The reason why this is important, is that only a few days ago, Feldstein wrote a damning piece, from which that previous quote is drawn.

The article was entitled “America’s Risky Recovery”, which as you know, is a theme to which Q Wealth Report constantly returns.

As readers of The Q Wealth Report know, the team here have also been warning, for a long time now, that the current financial ‘control systems’, are are in fact, dangerously ‘out of control’ … and that precisely because of this reality, we all need to individually protect our families, and our assets, from such unacceptable and above all, unnecessary risks.

Increasingly it seems then, that advice like we have been providing, that at one time was deemed “extreme” or “fringe”, is now attracting establishment support from major econimists!

“The very low interest rates that now prevail, have driven investors to take “excessive risks”, in order to achieve a higher current yield on their portfolios, often to meet return obligations, set by pension and insurance contracts.

This reaching for yield has driven up the prices of all long-term bonds to “unsustainable levels”, narrowed credit spreads on corporate bonds, and emerging-market debt, raised the relative prices of commercial real estate, and pushed up the stock market’s price-earnings ratio, to more than 25% higher than its historic average.

The low-interest-rate environment has also caused lenders to take “extra risks” in order to sustain profits.

Banks and other lenders are “extending credit to lower-quality borrowers”, to borrowers with large quantities of existing debt, and as loans with fewer conditions on borrowers (so-called “covenant-lite loans”).

Now, you might want to pause at this point, and do a “double take” on what he just said!

What Feldstein is saying, is that Banks are, once again …

… and that Banks are, once again, offering

“… loans with fewer conditions on borrowers”

Felstein very politely refers to these as …

In the industry, they’re given a far more accurate name ..

They’re referred to as … “liar loans!”

Haven’t we “been here before”?

And does anyone else have the words …

Feldstein’s report then, released only a few days ago, highlights the intractable, harsh realities of Central Banking’s “Catch 22” dilemma; and it’s the same one that Q Wealth Report have been highlighting for some time now.

And that reality of course, is why we’ve been urging readers to get their “B-Plans” in order, immediately. And it’s why in fact, we feel that those plans really ought to immediately be promoted to being your “A-Plans”.

Which in turn is why we’ve been stressing the critical importance of getting “The Practical International Banking Guide” into readers’ hands.  Or why not check out our full Q Wealth Report membership packages here, the membership includes the Offshore Banking Guide, many additional high value benefits, as well a numerous other essential reports offering advice on protecting your hard earned assets.

The Feldstein’s report then, is nothing short of a scathing endictment of Fed policies, as the impact that they are already having on your life and financial well being, unless you do something to counteract it.

Below then is the full article from Feldstein, outlining the grave issues that The Federal Reserves core activities have caused.

CAMBRIDGE – The United States’ economy is approaching full employment and may already be there. But America’s favorable employment trend is accompanied by a substantial increase in financial-sector risks, owing to the excessively easy monetary policy that was used to achieve the current economic recovery.

The overall unemployment rate is down to just 5.5%, and the unemployment rate among college graduates is just 2.5%. The increase in inflation that usually occurs when the economy reaches such employment levels has been temporarily postponed by the decline in the price of oil and by the 20% rise in the value of the dollar.

The stronger dollar not only lowers the cost of imports, but also puts downward pressure on the prices of domestic products that compete with imports. Inflation is likely to begin rising in the year ahead.

The return to full employment reflects the Federal Reserve’s strategy of “unconventional monetary policy” – the combination of massive purchases of long-term assets known as quantitative easing and its promise to keep short-term interest rates close to zero.

The low level of all interest rates that resulted from this policy drove investors to buy equities and to increase the prices of owner-occupied homes. As a result, the net worth of American households rose by $10 trillion in 2013, leading to increases in consumer spending and business investment.

After a very slow initial recovery, real GDP began growing at annual rates of more than 4% in the second half of 2013. Consumer spending and business investment continued at that rate in 2014 (except for the first quarter, owing to the weather-related effects of an exceptionally harsh winter). That strong growth raised employment and brought the economy to full employment.

But the Fed’s unconventional monetary policies have also created dangerous risks to the financial sector and the economy as a whole. The very low interest rates that now prevail have driven investors to take excessive risks in order to achieve a higher current yield on their portfolios, often to meet return obligations set by pension and insurance contracts.

This reaching for yield has driven up the prices of all long term bonds to unsustainable levels, narrowed credit spreads on corporate bonds and emerging-market debt, raised the relative prices of commercial real estate, and pushed up the stock market’s price-earnings ratio, to more than 25% higher than its historic average.

The low-interest-rate environment has also caused lenders to take extra risks in order to sustain profits. Banks and other lenders are extending credit to lower-quality borrowers, to borrowers with large quantities of existing debt, and as loans with fewer conditions on borrowers (so-called “covenant-lite loans”).

Favorable borrowing costs have fueled an enormous increase in the issuance of corporate bonds, many of which are held in bond mutual funds or exchange-traded funds (ETFs). These funds’ investors believe – correctly – that they have complete liquidity. They can demand cash on a day’s notice.

But, in that case, the mutual funds and ETFs have to sell those corporate bonds. It is not clear who the buyers will be, especially since the 2010 Dodd-Frank financial-reform legislation restricted what banks can do and increased their capital requirements, which has raised the cost of holding bonds.

Although there is talk about offsetting these risks with macroprudential policies, no such policies exist in the US, except for the increased capital requirements that have been imposed on commercial banks. There are no policies to reduce risks in shadow banks, insurance companies, or mutual funds.

So that is the situation that the Fed now faces as it considers “normalizing” monetary policy.

Some members of the Federal Open Market Committee (FOMC, the Fed’s policymaking body) therefore fear that raising the short-term federal funds rate will trigger a substantial rise in longer-term rates, creating losses for investors and lenders, with adverse effects on the economy.

Others fear that, even without such financial shocks, the economy’s current strong performance will not continue when interest rates are raised. And still other FOMC members want to hold down interest rates in order to drive the unemployment rate even lower, despite the prospects of accelerating inflation and further financial-sector risks.

But, in the end, the FOMC members must recognize that they cannot postpone the increase in interest rates indefinitely, and that once they begin to raise the rates, they must get the real (inflation-adjusted) federal funds rate to 2% relatively quickly.

My own best guess is that they will start to raise rates in September, and that the federal funds rate will reach 3% by some point in 2017.

Only time will tell then, how the Fed’s self-imposed “Catch 22” dilemma will pan out. But in the meantime, make no mistake, those with the “smart money” have already made sure it’s safely cared for … offshore.

So we’d implore every reader of this article to similalry move their assets to the relatively calmer waters of “offshore.”

Safeguarding your families future is in fact MUCH easier that you perhaps think.

Don’t put off taking action until … “tomorrow” … because “Procrastination” remember, is not only “the thief of time” … in this case, it’s also, quite literally, the thief of your money as well!

We look forward to your call

To Your Secure Future … as always