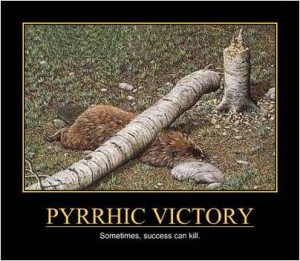 Pyrrhus, was a Greek military general, who was born close to the time when Alexander the Great died.

Not only was he a great military leader, he also grew up to be King of three separate Kingdoms, within what we now know call Greece.

He is perhaps especially well known to us, because he inflicted several heavy defeats on Roman Armies.

Latterly though, those victories came at a very heavy price.

After one too many such “hollow victories”, one that cost the lives of the majority of his best generals, Pyrrhus was reported as saying …

“If we are victorious in one more battle with the Romans, we shall be utterly ruined!“

Pyrrhus’ words live on, in the phrase “pyrrhic victory” … categorized as a victory, gained at too great a cost. 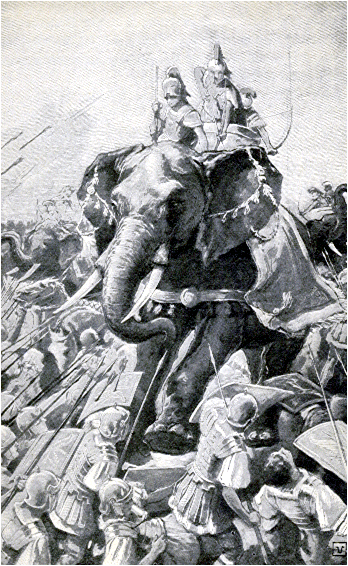 Like Hannibal long after him, Pyrrhus used “war elephants” against Rome

The modern day inhabitants of Greece perhaps have have the wise words of Pyrrhus ringing in their ears this morning, as they wake up the latest “pyrrhic victory” that Prime Minister Tsipras has rammed through that now mockery of a “bought & paid for” Parliament of theirs

Faced with a rebellion from the members of his own Leftist (and now clearly only purportedly “ruling”) Syriza Party, Tsipras now looks likely to face a “Confidence Vote” in his leadership, as early as next week.

But crucially though, that vote will NOT come in time to alter the vote that took place overnight.

The decision to agree to the terms of the Bailout though, was the one that the Troika Debt Controllers had demanded, and that now their ‘messenger boy’ Tsipras, has successfully delivered for them!

Despite the rebellion from within his own ranks, Tsipras did just enough “horse trading” and offered just enough “inducements” it seems, to garner the necessary number of Opposition votes, to pass the 85 Billion Euro Bailout Bill.

In the bruising process though, he side-lined many now furious members of his own now hopelessly divided Party; a party that now simultaneously smells both Tsipras’ “blood in the water”, and the same reek of ‘betrayal from within’ that led to previous maverick Finance Minister, Yanis Varoufakis, resigning and leading a revolt against the Troika deal.

In the end, well over 40 Syriza Party members defied Tsipras, and voted against the Bail Out Bill, including obviously Varoufakis himself.

All were furious at the punishing “fine details” of the 400-page deal; a deal that, spitefully was far more punishing than the one that the People had already rejected in the phony Referendum that Tsipras had so disingenuously called last month.

The purported Leftist, Tsipras … who was forced to ally with and rely on a coalition of RIGHT WING MPs (!) in order to push the Bail Out Package through … was reduced to speaking in gobbledygook and oxymoronic terms, at one time even telling parliament that the Bill was a … “necessary choice”!

So that would be no “choice” at all then!

The Mafia have a phrase for a “choice” like that … they call it “an offer that you can’t refuse”!

In this case, the dictatorship comes in the form of a Trojan Horse-style gift, of fraudulent faux debt; debt that is nothing short of being “weaponized”.

How else could you describe something that can prevent the so-called “representatives” of a People, from actually “representing” the People? 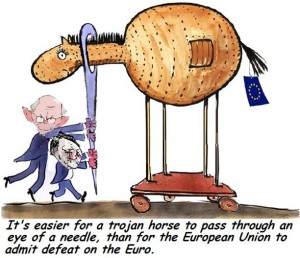 The package still has to be “rubber stamped” by both EU Finance Ministers and EU member State Parliaments of course, but these perfunctory steps are widely seen for just what they are, “token gestures” and a mere “nod” towards even inadequate democracy, sought only after the Debt Dictators have already got what they wanted!

The looming “deadline” that focused minds in Athens last night of course … such that they began debating the Bill at 2.00am in the morning (!) and passed it, bleary-eyed and sleep-deprived, at 9.45am (!) … is the 20th of August; the date on which the European Central Bank demand that Greece pay the latest tranche of 3.2 BILLION Euros to them!

The terms of the Bailout led to one Syriza Party member after another, to accuse Tsipras of essentially betrayal of the People.

They accused him of personally “misleading the Greek people”, and of pushing through a “shameful Bail Out Bill”.

One member though, saved his most withering tirade, for the new and embattled Finance Minister, Euclid Tsakalotos, saying …

“After all the Anti-Austerity struggle that they led, they are now introducing another lovely bailout!

So what kind of government is this?

Where whatever the Greek people vote for,

no matter what they fight for,

or what the outcome of a referendums is,

It has a name: the annulment of Democracy,

and the dictatorship of the Eurozone over the neo-colony of Greece!”

Harsh words indeed, but all lovers of freedom and sovereignty find it hard to argue with the underlying sentiment.

But the root of the problem, isn’t anything to do with what “Wing” of governance “fake rules” over any given country, it’s that sovereignty itself, personal and national, has now de facto become a thing of the past; kept alive now “in name only”, and only then, simply as a convenience to the dictators, in order to prevent the people from truly rebelling over what has been surreptitiously and insidiously stolen from them.

The malaise that infects Greece though, is by no means confined to Greece.

Their sovereignty is merely the “Canary in the Coal Mine”, lying dead on the bottom of the cage, while her politicians prop it up on its perch, and speak through its long dead mouth.

That failure of ALL purportedly sovereign countries around the world, is a signal failure to recognize what Thomas Jefferson seemed to have had tattooed throughout his very being.

That spirit manifested itself when he said …

“The modern theory of the Perpetuation of Debt,

has drenched the earth with blood,

and crushed its inhabitants under burdens, ever accumulating.”

James Madison too, intimately understood the insidious, invasive, and cancerous danger that Tsipras and the rest of the treasonous false “representatives” of the Greek People, still woefully, if not deliberately, stubbornly fail to grasp.

He once insightfully said …

“History records, that the Money Changers have used every form of abuse, intrigue,

deceit, and violent means possible, to maintain their control over governments,

by controlling money and its issuance.”

Few politicians have ever come so close to distilling the true source of the problem.

Greece then, the very “Cradle of Democracy”, has found out the hard way, that Democracy, as important as it was in our march towards justice, is very much NOT the pinnacle of humanity’s attempts to organize their affairs.

But stupidly and sadly, we have allowed our “systems of representation” (not to mention our “systems of money issuance”) to be completely infested, once again, by that same band of pestilent Central Banking Money Changers.

As Jefferson further put it …

“The bold effort the present (central) Bank had made, to control
the government … are but premonitions of the fate that awaits the
American People [and at this point, we can certainly insert … “the
Greek People” … as well as every other “People”!] should they be
deluded into a perpetuation of this institution, or the establishment
of another like it!”

So long as then, people remain afraid and “lost” under the poisonous delusion of “Party Politics”, inflicted on them by politicians who in fact represent Banking, and not “The People”, then the current death of sovereignty “by a thousand cuts”, will unfortunately continue.

The “take away” from this sorry and painfully ongoing story then, is that personal sovereignty, and privacy too, are equally under assault.

But unlike it seems entire countries, for now individuals can still take measures to protect what is left of their sovereignty.

Before matters deteriorate even further then (as they seem inexorably destined to do) we would strongly urge all readers to take the steps that so many other savvy investors have already taken, and allow the Q Wealth Report Team to help you to protect yourself and your family.

Visit the members Area now, and you too will see the ‘no-brainer’ list of Member benefits.

Simply sign up, and see how many of your fellow readers here, are feeling so much more secure, as we all face an uncertain future.