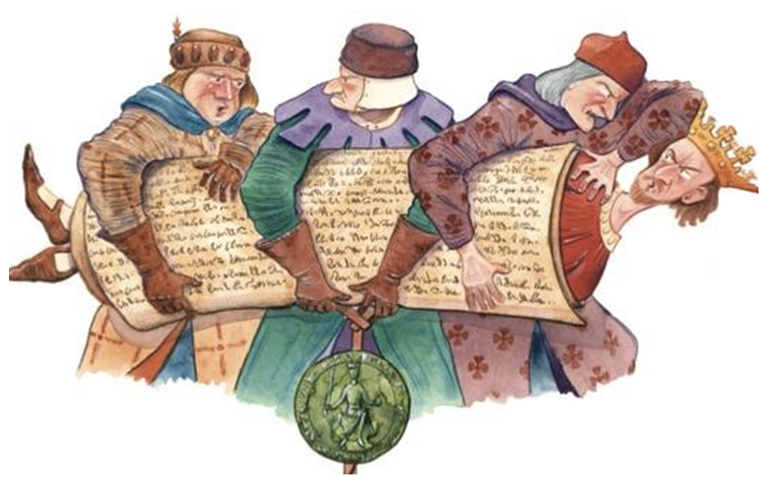 If the Magna Carta didn’t exist, then it would have to be invented.

Following yesterday’s anniversary, 800 years ago, the nearest thing, still, that England ever had to a Constitution, came into being.

Much adored by the legal profession, and hailed as the basis of their considerable authority, the traditional view of the Magna Carta was voiced by Lord Denning, this way …

“Magna Carta is the greatest constitutional document of all time; the foundation of the freedom of the individual, against the arbitrary authority of the despot.”

Having severely punished many of the Barons, for their failure to support his attempts to win back land he had lost in France, King John (whose deserved nickname became “John Lackland”, after having squandered the inheritance that his big brother Richard had gifted him) found himself on the brink of civil war.

The swords are important really, because it was the threat of the swords that soon led to John being able to have the entire Magna Carta document annulled by Pope Innocent III.

But it was eventually at Runnymede though, that John grudgingly applied his seal to the list of demands made by the Barons, restoring many of their rights, and tempering the Kings absolute powers over them and everyone else.

Hence it was essentially more of a “power sharing agreement” than the kind of “shopping list of human rights” that it has commonly come to be believed to be.

After centuries-worth of amendments and re-writes, only three core ‘freedoms’ still remain in UK Law, from the original Magna Carta.

The first freedom to survive, is hardly surprising really, given that the leader and chief negotiator for “The Barons” was not actually a Baron at all, but was in fact a religious man called Stephen Langton, who just so happened to be … the Archbishop of Canterbury.

But nonetheless, that concept of the “Freedom of The Church”, born of the survivalist instincts of the Church, did lay the basis of the eventual moves towards the “Separation of Church and State”.

Under Langton’s ecclesiastical mediation, the Magna Carta did at least outline the need for the separation and division between “”Ecclesiastical”” and “Civil” laws, a move which thankfully spelled the beginning of the end of the principle of the “Divine Right To Rule”; the principle upon which the very concept of “Monarchy” had always been founded, with all of the abusive assumptions to absolute power that went with that.

The second ‘freedom’ that has survived down through the ages, is the “Freedom of The City of London”, which has perpetuated the vital interests of the financial powers, and secured the independence of the City State of London, from the rest of England; independence similar to that enjoyed by those other two City States, The Vatican, and Washington D.C. … who between them share the spoils of the Financial, Ecclesiastical, and Military control of the planet.

The third and most important, (if subtly insidious) provision that has survived, is what a later revision of the Magna Carta in 1354 would call … “the due process of Law”, from which ‘habeas corpus’ and other legal rights stem.

But this provision also forms the third surviving plank, upon which the near absolute powers of the modern day “State” have been built.

Through it, the goal of individual freedom, was reduced to the wholly more constrained form, eventually to be known as … “Freedom Under The Law”.

It’s little wonder then, that a similar phrase lay at the heart eventually of the Declaration of Independence, namely … “The Consent … of the Governed” … another oxymoronic phrase, similar to “Freedom, under The Law” from the Magna Carta.

So while it is true, that if the Magna Carta didn’t exist, we’d have to invent it, the reverential, near worshipful view of the Magna Carta held by so many in the Law profession, is not exactly conducive to the eventual emergence of true individual freedoms.

Hence the reverence in which the Magna Carta is held by many, has meant in some ways that it has become a document “frozen in time”, and instead of it becoming a springboard from which human freedoms could advance, it has become a chain by which they are bound.

Hence in many ways, despite its undoubted pivotal status, the Magna Carta has also stymied progress towards an evolved form of empowerment and freedom for the individual.

In other words it was, and remains, a document that ultimately ensured that power was shared between what were essentially the fellow Aristocrats of the Monarch.

Just as the “We The People” of the American Constitution included none but the landed Aristocrats and Slave Owners who framed it, so too it was the Aristocratic “Barons” who solely benefited from the “point of a sword” concessions made by the tyrant King John.

So by all means, absolutely, let’s remember the Magna Carta for the historic document that it is, but at the same time, let’s not mythologise it, and pretend that it is more than it was.

Individual, sovereign human beings still have a long way to go before their rights to Privacy and Freedom are truly enshrined and protected, and 800 hundreds years of the Magna Carta have done little to cement those rights.

As is proven by the desire of Q Wealth Report readers and millions of others, much remains to be done to curb the absolutist powers that still persist on the planet.

Just as King John “Lackland” squandered what he had been given, and turned to squeezing the Barons for more and more taxes, until they rebelled, so too today, “the State” today is similarly demanding ever more and more in taxation from the exhausted, productive part of the economy, all in order to fund the squandering spending habits of our misguided so-called Leaders.