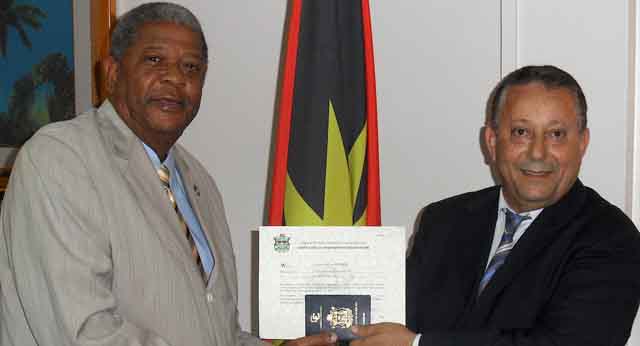 The Antigua economic citizenship program took a historic step last week, and we were there for it! 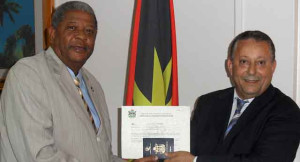 passport to be granted, in this case to a Syrian national and businessman who is looking to help bring tourism to the island.

I see this as a positive and confidence building signal from the Antiguan government in support of this program…and it came at just the right time.

It is an election year in Antigua (in fact elections are to be held very soon) and from what I could gather on island the opposition to the current party is expected to take over.  This is the very same opposition group who did a bit of saber rattling against the CIP program when the legislator was being passed late last year.  After a few conversations with a few well-placed locals I feel confident that this was nothing more than pre-election noise and that the future of the CIP program is well secured.

Another positive sign for the future of the Antigua economic citizenship program is the amount of time it took from application to ceremony for this first passport.

Speed is the reason why economic citizenships are so attractive.  If you’d like a passport fast, it’s often the best way to go (excluding citizenship by ancestry or marriage…either impossible or undesirable for the majority of passport seekers!)

In theory the average wait time for an economic citizenship is around 4-5 months.  In practice this can sometimes range into the 6-7 month period while Antigua’s first passport was granted in just 3 months.

Development in Antigua is ramping up.

Antigua real estate will be a market to watch in the next few years.

While not nearly matching the fever pitch of construction on St. Kitts, Antigua’s developers are preparing, planning and building to meet the oncoming demand for housing that the CIP program will certainly create.

I spent a full day circling the entirety of Antigua’s coastline, taking in the scenery and touring developments.  Most of these developments had began construction before the CIP program came into effect and have already (or are in the process of) re-configured their projects to become a better fit for those seeking citizenship.

With both the government and private sector developers having embraced the citizenship by investment program Antigua, already a major hub of the Caribbean, looks to have a bright future…one you can be sure we will be watching closely.

Leave your questions or comments below!